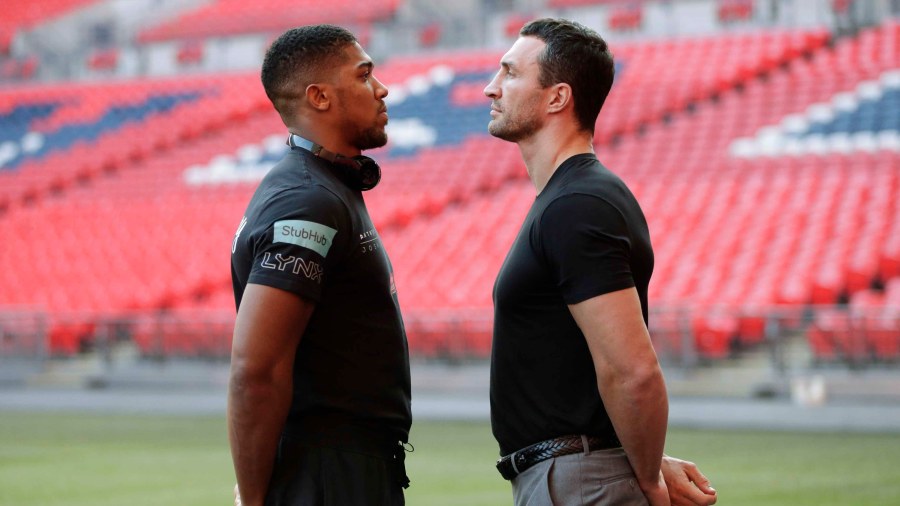 Beyond Anthony Joshua vs Wladimir Klitschko, James Slater speaks to author Jerry Izenberg about the golden age of heavyweight boxing

NEW JERSEY’S Jerry Izenberg has covered boxing since the 1950s. The long-time columnist for The Newark Star-Ledger has seen them all: Sugar Ray Robinson, Sonny Liston, Roberto Duran, Muhammad Ali, Mike Tyson. But it is the heavyweights, and the Golden Era of the division, that Izenberg focuses on in his new book: ‘Once There Were Giants.’

Crammed full with his recollections of the greats, their fights, their training camps, their personalities, Izenberg’s latest offering is unique in how it is the memoir of one of the last remaining old-school writers who covered boxing when it was very special indeed.

Good friends with the likes of Ali, Liston and Frazier, Izenberg is more qualified than anyone else when it comes to telling the behind the scenes tales relating to those titanic battles.

Q: Tell us about your new book, “Once There Were Giants.”

Jerry Izenberg: “Well, this is a very personal book for me, and most of it is written from memory. It’s almost a memoir. I was lucky in that I had close relationships with Ali of course, but also with Joe Frazier and George Foreman and Larry Holmes. It was The Golden Era of the heavyweight division, from Sonny Liston becoming champion, to Mike Tyson biting Evander Holyfield’s ear. I was fortunate to have covered boxing during this time, when the heavyweight division was something very, very special. It really was The Golden Era, and it isn’t coming back. I’ll give you two reasons why:

“One is the trainers – and you have a couple of good trainers in the UK right now – we had great trainers in the US: Ray Arcel, Eddie Futch, Freddie Brown, Manny Steward – and they’ve all gone now. So how can any pupil learn without a teacher? Secondly: although we produced all the great champions, we’re talking about heavyweights predominately, there really isn’t that much money [in boxing] today. Aside from the [Floyd] Mayweather-type paydays, there are only a handful of other fighters that can generate that kind of money. Other sports, they can earn good money from, and you don’t have to get hit in the face!”

Q: How do you see today’s best heavyweights? Is there anyone you have any hope in?

J.I: “This is how I see it, and I hope I don’t hurt anybody’s feelings. We haven’t had a real world heavyweight champion since the [Lennox] Lewis-[Riddick] Bowe era. And people ask me why Lewis isn’t included in my Golden Era. Let me tell you, Lewis was a marvellous heavyweight, but he just didn’t have the great opposition to fight; we’re not talking Oliver McCall [is worthy of being rated amongst the greats] for heaven’s sake! But today, people on the street, if you ask them, they can’t tell you who the heavyweight champion of the world is.

“As I see it now, the winner of the [Anthony] Joshua-[Wladimir] Klitschko fight can be the next genuine world heavyweight champion. Can Joshua win? I think so and I’ll tell you why later. Deontay Wilder can possibly earn the right to be the next world heavyweight champion, and he has a bomb of a right hand. They are both a work in progress. Joshua has the tools to progress. Wilder, he reminds me of George Foreman – the first time around. Foreman, who I was also pretty close to, didn’t really know how to fight. He just clubbed guys on the head and Ali exposed that when they fought. Wilder, he really reminds me of that. But George learned, he really did. Wilder better hope that he can learn. But I think out of the two of them, Joshua has the better chance to improve: he has the tools and he has a pretty good trainer.

“I think he can beat Klitschko – see, the better Klitschko fighter [Vitali] retired. Joshua has to make sure the referee [on April 29] is strong about his [Klitschko’s] holding. If I was involved, I’d make damn sure I made hell at the rules meeting, on the subject of him holding and how he sure better get penalised for it if he does it.”

Q: Who are the greatest heavyweights in history in your opinion?

J.I: “Recently, I put Jack Dempsey down a few places, because of one thing: they didn’t have the neutral corner rule back in those days. That made a lot of difference. Dempsey loses a few points, because hitting a guy in the head while he’s trying to get up, well, that was kinda crazy. It wasn’t MMA back then – in fact, if you did that today [hit a guy as he tries to get up] you’d be arrested! Boxing to me is a beautiful ballet; it’s as beautiful as it is brutal. But the jab is the key punch; the key to everything else, all other punches.”

Q: What are the greatest fights you’ve sat ringside at? You’ve covered so many of course.

J.I: “Nobody will ever see anything like the Ali-Frazier fight in Manila. That fight, it had no knockdowns, no low blows, no rabbit punches, but it had everything else and it was just brutal. One guy was up, one guy was behind, one guy was up, one guy was behind, and so on and so on – right until the 14th round, because there was no 15th round. I had Ali up by a point going into the 15th, so the fight was still up for grabs for Frazier; certainly he could have won it if he’d scored a couple of knockdowns. Nobody will ever see a fight like that again.

“But the greatest ever 15th round (in a heavyweight championship fight), was the Larry Holmes-Ken Norton fight. Both guys had a handicap in that fight. Holmes had a torn muscle in his left bicep. Larry’s money punch was his left, his jab. Norton, he was tough and strong, but he could never handle, or stand up to a big puncher. In this fight, his corner had managed to persuade him that Holmes wasn’t a big puncher. Holmes, he knew going into the last round that the fight was up for grabs, and he didn’t care any more about getting hit in the left bicep. He knew he had to throw his best punch, give it everything he had and the hell with it. And Norton knew he could go toe-to-toe with Holmes, so they both really went at it! Holmes almost stopped Norton at one point. That was the greatest 15th round I ever saw.”

Q: Who was the greatest fighter you ever saw live?

J.I: “Tough question. Roberto Duran was the best lightweight I ever saw, but he should have stayed at lightweight. He wasn’t as great when he moved up to welterweight and middleweight. I covered the final fight of Sugar Ray Robinson. He was a fighter, in his prime, who could do whatever he wanted to do. [Ray] Leonard, he’s up there, but I had [Marvin] Hagler beating him. He [Leonard] stole a lot of rounds. Robinson was the best; he’d have won the light-heavyweight title against Joey Maxim, but for the 100-degree heat. The referee collapsed before he did.

“But my new book is about the heavyweights and that great, never to be repeated cycle. I’m very fortunate to have covered the sport during that time.”

‘Once There Were Giants’ is out now.