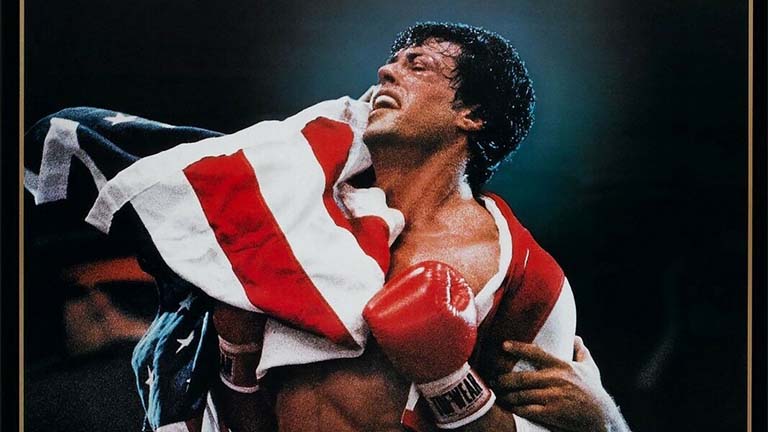 From the ridiculous to the sublime, Matt Bozeat rates the best (and worst) fight films, from 50 down to 1. Read part two here

40. KILLER’S KISS (1955)
This early Stanley Kubrick flick – he’s best known for The Shining and A Clockwork Orange – is an arty, unsettling and really rather strange movie about Davey Gordon (Jamie Smith), a veteran fighter whose chin lets him down on his big nights, and his bid to rescue dancer Gloria Price (Irene Kane) from her infatuated boss Vincent Rapallo (Frank Silvera).

39. THE SQUARE RING (1953)
Ealing Studios’ take on boxing in the 1950s goes behind the scenes on fight night at Adams Stadium. The thigh-slapping, music-hall style banter and stilted exchanges sometimes make The Square Ring feel like a Harry Enfield sketch, but still, you find yourself caring about what happens to the fighters and their women.

38. ROCKY IV (1985)
Future generations will learn through history books that the Cold War was brought to an end by a boxing match between Rocky Balboa (Sylvester Stallone) and Ivan Drago (Dolph Lundgren). So impressed were Russian rulers by Balboa’s heroics they decided to let bygones be bygones. Or something.

37. THE CHAMPION (1915)
Research proves nobody has laughed at a Charlie Chaplin movie for decades. Still, the horseshoe-in-glove scene from The Champion is iconic and if you want proof of Chaplin’s everlasting genius, watch City Lights, which includes a boxing scene.

36. THE BATTLING BUTLER (1926)
In this silent, PG Wodehousesque farce, Buster Keaton is the posh, lazy and spoilt Alfred Butler (Keaton) who is mistaken for a boxer of the same name. To impress a girl, and her overbearing brother and father, he goes along with it. With amusing consequences – and a twist or two at the end.

35. CREED (2015)
Rocky spin off in which Tony Bellew convinces as the noisy and argumentative Liverpudlian Tony Bellew. I mean, “Pretty” Ricky Conlan.

34. ROCKY BALBOA (2006)
Let me tell you something you already know: This world ain’t all sunshine and rainbows. Proof of that is that Rocky V exists. The sixth film in the Rocky series is an improvement, which isn’t saying an awful lot admittedly.

33. THE WAIT (2009)
This 20-minute short captures the tension and humour in the away changing room on fight night – by someone who knows the subject. Jon Pegg, former fighter and current manager and trainer, wrote, directed and starred in The Wait. There’s also a part for Richie Woodhall who does little more than stare at his phone and swear about the postman who’s stolen his girlfriend. He’s the star.

32. GIRLFIGHT (2000)
Before Million Dollar Baby, there was this, the story of an angry Brooklyn teenager who takes up boxing – and happens to be a woman.

31. HARD TIMES (1975)
Craggy-faced drifter Chaney (Charles Bronson) is considered way too old to be a bareknuckle boxer – until he starts punching people on the nose.