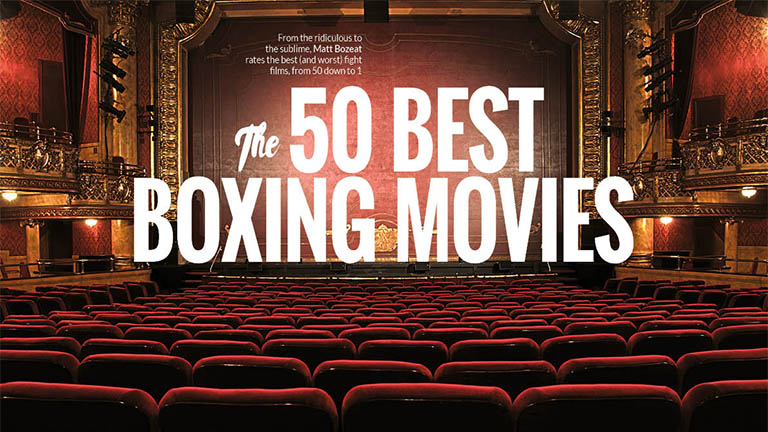 From the ridiculous to the sublime, Matt Bozeat rates the best (and worst) boxing films, from 50 down to 1. Read part one here

48. THE KNOCKOUT (1914)
A century ago, Charlie Chaplin and Roscoe “Fatty” Arbuckle were as famous as anyone in the world and here they are chasing each other around a ring in one of the first boxing-themed movies. Ouch! There go my sides!

47. UNDISPUTED (2002)
Basically, what would have happened if Mike Tyson had bumped into the prison boxing champion after his conviction for rape. Spoiler alert: They don’t get on.

46. RISEN (2010)
The story of wholesome Welsh hero Howard Winstone (Stuart Brennan) has some nice moments, but is rather let down by some wobbly camerawork and even shakier acting by some of the supporting cast.

45. KID GALAHAD (1962)
About a Sheffield scallywag who, on the advice of his boyhood hero, seeks out a wise old boxing guru who helps him turn his life around. Not really. It’s got Elvis Presley in it.

44. THE MILKY WAY (1936)
In the 1920s, Harold Lloyd was America’s boy-next-door. By 1936, his wide-eyed earnestness was starting to grate with audiences, but talkie The Milky Way has its charms and the story of the unassuming milkman turned boxer was subsequently remade twice, as The Kid From Brooklyn and The Calcium Kid.

43. RESURRECTING THE CHAMP (2007)
Starring Samuel L Jackson, this is a film that desperately wants to say something important – don’t make up stories to impress your children? – but ends up being a bit of a mess and the notion that writing a boxing feature can make you irresistible to women is, trust me on this one, nonsensical.

42. HOMEBOY (1988)
At times hard going for the viewer with its mumbled dialogue and uneasy silences, Homeboy stars future pro Mickey Rourke as a broken fighter forced to choose between his dodgy friends and a big fight against a top contender played by Iran Barkley.

41. GLASS JAW (2018)
Slick action movie that won’t startle anyone with its insight. But it doesn’t set out to.