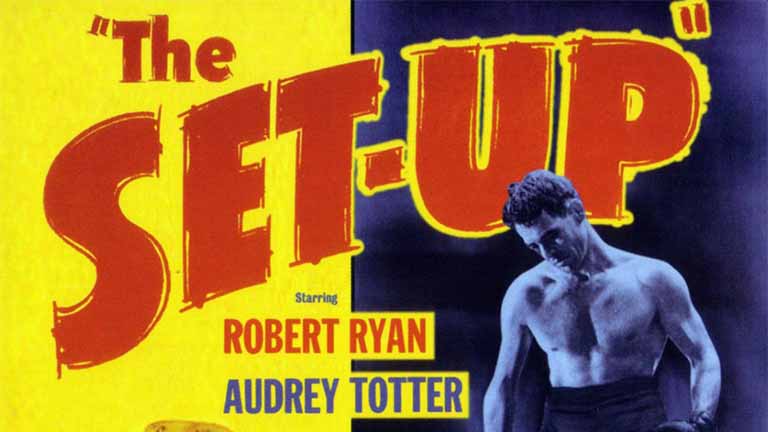 From the ridiculous to the sublime, Matt Bozeat rates the best (and worst) fight films, from 50 down to 1. Read part four here

20. THE SET UP (1949)
Boxing and the film noir genre of the 1940s and 1950s were a good fit, giving writers and directors the opportunity to delve into a murky world of mobsters and fixed fights. The Set Up is one of the best of its kind, based on a poem about an ageing fighter too proud to throw a fight. Stoker Thompson (Robert Ryan) is 35 and trying to convince Mrs Stoker Thompson (Audrey Totter) he still has a future in boxing. “I remember the first time you told me you’re just one punch away from a title shot,” she says. “Don’t you see, you will always be one punch away.”

19. THE POWER OF ONE (1992)
Rocky director John J Avildsen directs a film based in a South Africa divided by apartheid South Africa that touches on the universal truth that in a boxing gym, everyone is treated equally.

18. BLEED FOR THIS (2016)
Documentary-style scenes and footage of fights add authenticity to the inspiring tale of Vinny Pazienza (Miles Teller), an impulsive character who lived for turn-of-the-card thrills. Even so, making an old and past-it Roberto Duran out to be an invincible monster grates somewhat.

17. THE BLEEDER (2016)
Chuck Wepner – played superbly by Liev Schreiber – says: “Without me, there’s no Rocky” and while that’s true, the frequent clips of Requiem For A Heavyweight give a better clue to this film’s themes. The Bleeder does not, as might be expected, climax with Wepner’s fight against Muhammad Ali in 1975 that inspired Sylvester Stallone to write his Oscar winner. Rather it focuses on the aftermath and how the happy-go-lucky “Bayonne Bleeder” copes – or rather doesn’t cope – with the fame that engulfs him. Wepner has rather more fun than those close to him and though his partying costs him his family, it’s hard to dislike him and you wish a happy ending for him.

16. THE FIGHTER (2010)
Micky Ward (Mark Wahlberg) comes across as a decent man who thinks rather more of his family than they think of him. The key relationship is his co-dependency with elder brother Dick Eklund, whose own career highlight was a fight with Sugar Ray Leonard he’s often too busy recollecting through a druggy daze to train Ward. So well did Christian Bale play Eklund, he got an Oscar for Best Supporting Actor.

15. JOURNEYMAN (2017)
Of the 50 films on this list, Journeyman, written by and starring Paddy Considine, is surely the most uncomfortable viewing. Everyone disappears from Matty Burton’s life after he suffers horrific head injuries during a brutal fight that gives his boxing career the credibility he craves.

14. ALI (2001)
The story goes Muhammad Ali was banned from the set of this biopic because upon spotting him, everyone stopped filming and tried to touch him. That gives an indication of the job facing Will Smith in portraying “The Greatest”. He has the swagger, comic timing and athleticism to pull it off and the boxing scenes are the most realistic of any here.

13. JAWBONE (2017)
Johnny Harris wrote this and stars as Jimmy McCabe, a former junior boxing champion who has since lost his way. Each day starts with a few gulps of vodka and after being evicted from his flat, McCabe returns to the amateur boxing gym needing a place to stay and a way to make money. The coaches – played by the excellent Ray Winstone and Michael Smiley – shake their heads with sadness at McCabe’s story and the news he plans to fight unlicensed, but, as this film captures perfectly, boxing people have a way of looking after their own.

12. THE HURRICANE (1999)
Though this slick telling of Rubin “Hurricane” Carter’s story isn’t entirely faithful to history, it’s made memorable by a towering effort from Denzel Washington.

11. CHAMPION (1949)
The radio commentator announces in the opening scene: “They’re cheering more than a man tonight. They’re cheering a story. A story that could only have been written in the fight game. A story of a boy who rose from the depths of poverty to be champion of the world.” The following 90 minutes or so reveal the story of Michael ‘Midge’ Kelly to be an amoral one of an angry young man – played by Kirk Douglas in his breakthrough performance – who ruthlessly betrays and discards everyone on his way to the top. By the time of the fight at the end, bringing the film full circle, the hope of viewers is that Kelly loses.

Read the final part, the 10 greatest boxing movies of all time HERE