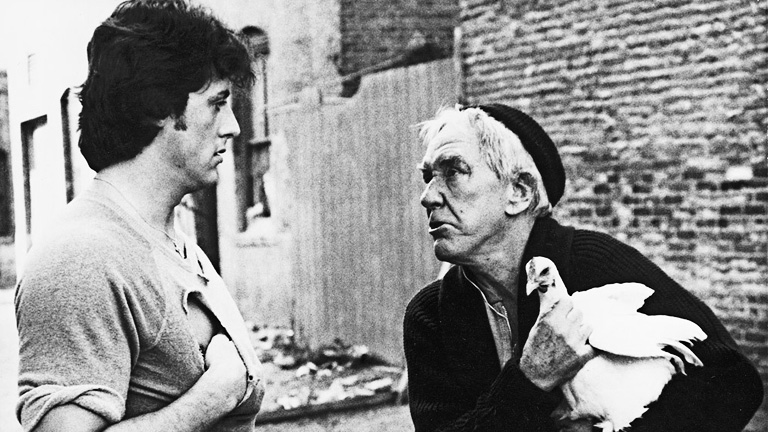 10. TWENTY FOUR SEVEN (1997)
Nobody does grit like Shane Meadows. This forgotten classic, shot entirely in black and white, is set on a Nottingham council estate where there are more drugs than opportunities and a criminal record is worn as a badge of honour. What’s missing, says Darcy, is “something to believe in” and the answer, he says, is to reopen the amateur boxing gym. As is to be expected from Meadows, this is no fairytale as for every character looking to better themselves through boxing, there’s someone seeking to hold them back. Bob Hoskins ditches his Cockney patter for a passable East Midlands accent, me duck, to play Darc-eh and there’s also a part for a young James Corden.

9. CINDERELLA MAN (2005)
Utterly unbelievable Hollywood nonsense about a washed-up pug who leaves the dole queues of the Depression behind to win the world heavyweight championship. Which happens to be true. Despite an A-list cast topped by Russell Crowe – him out of Gladiator – and Renee Zellweger – her out of Bridget Jones – Cinderella Man is refreshingly free of schmaltz and because the late Angelo Dundee helped teach Crowe some boxing moves the fight scenes are convincing. Mostly. Still, so good is this story, your local am-dram society could pull it off.

8. BODY AND SOUL (1947)
Minutes before he leaves the changing room for a fight he’s agreed to lose, world champion Charley Davis (John Garfield) thinks back on the “rotten, hard and tough” journey he’s taken in boxing and what happens next. He has to choose between money and his pride and between the ruthless promoter who’s made him wealthy and the friends and community who look up to him. His decisions aren’t revealed until the closing moments.

7. THE HARDER THEY FALL (1956)
Budd Schulberg dipped into heavyweight history for this storyline about a circus strongman brought over to the United States from Europe to become the heavyweight champion of the world – even though he can’t fight at all. “Powder puff punch and a glass jaw,” is the opinion of sportswriter Eddie Willis (Humphrey Bogart, in his final film), after watching Toro Moreno (Mike Lane) spar Jersey Joe Walcott, playing a trainer named George rather than himself. Promoter Nick Benko (Rod Steiger) counters: “He’s got it in him to fill a stadium.” The only way Moreno will ever get there is through fixed fights and after losing his newspaper job, Willis agrees to write his publicity – despite his conscience and the appeals of his wife to his sense of decency.

6. SOMEBODY UP THERE LIKES ME (1956)
Paul Newman is perfect as the pig-headed and wild youth with the glint in his eye who sums up his life choices as “stealing, starving or fighting.” After many wrong turns, he opts for the latter and as Rocky Graziano, he furiously fights his way to the world middleweight championship. The fight to shake off his past and be accepted by what he calls “the legit world” proves as tough as his battles with Tony Zale (Court Shepard). More than six decades after its release, Somebody Up There Likes Me, awarded an Oscar for Best Cinematography, is still a classic.

5. THE BOXER (1997)
Only those who lived who lived through The Troubles really know its real horrors, but it’s hard to imagine any film capturing the tension and hopelessness of those hardest of times as well as The Boxer. Upon his release from prison after a 14-year sentence, Danny Flynn (Daniel Day-Lewis) sets about reforming a non-sectarian boxing gym in West Belfast and rekindling a romance with teenage love Maggie (Emily Watson), making him a target for the hateful handful determined to ruin the peace process. The question here isn’t whether Danny and Maggie will get together, rather whether they will make it until the end of the film without being murdered? The Boxer is a love story, a history lesson and perhaps above all else, it’s a film about forgiveness.

4. FAT CITY (1972)
Based on a novel by Leonard Gardner, this is set further down the bill than most of the films on this list, in the rather grim world of Billy Tully (Stacy Keach). His boxing career appears to be over until Ernie Munger (Jeff Bridges) turns up at the gym and motivates Tully to leave the broken barroom philosophers behind and fight again. Tully pulls off the upset in a fight that makes Marvin Hagler-Thomas Hearns look like a game of paper/scissors/stone and, in keeping with the film’s mood, the euphoria soon evaporates. Tully feels he’s underpaid for his night’s work – “Is this all my blood and sweat is worth?” he protests – and on returning to his flat, he discovers that while he was out fighting, his girlfriend has moved her ex back in. He promises to buy a ticket for Tully’s next fight – and then slams the door in his face. The film ends – abruptly – with Tully where we found him, in a state of hazy rumination in the early hours, except this time he’s drinking coffee, rather than alcohol, and in Munger, he’s found a positive influence.

3. REQUIEM FOR A HEAVYWEIGHT (1962)
This adaptation of Rod Serling’s play starts with the closing moments of former heavyweight contender Mountain Rivera’s career, seen through his blurry, damaged eyes. Cassius Clay is the one throwing the punches that leave Rivera’s face such a mess he’s horrified when he sees himself in a mirror. The film goes on to touch on universal themes of dashed hopes, pride and misplaced loyalty as Rivera (Anthony Quinn) faces up to the possibility that without boxing, he has no place in the world. “I’m a big ugly slob and I look like a freak,” he tells a well-meaning employment counsellor, “but I was almost the heavyweight champion of the world.” The counsellor (Julie Harris) takes a shine to Rivera and tries to find him meaningful work with prospects, but his manipulative manager Maish (Jackie Gleeson) persuades her Rivera is better off in the company of boxing people who understand him and his limitations. What Maish really means is, Rivera is better off in the make-believe world of wrestling he despises and giving a percentage to his manager so he can pay off the mobsters chasing him for an unpaid debt.

2. RAGING BULL (1980)
Critics loved this bleak portrayal of Jake LaMotta, the former middleweight champion whose rage is turned inside out and threatens to destroy him. Robert De Niro won the Oscar for Best Actor and Raging Bull regularly features in lists of the best films of the decade. De Niro had to persuade Martin Scorsese to make the film, taking his copy of LaMotta’s autobiography to the director while he was in hospital recovering from drug binges that left him fighting for his life. Scorsese presumably saw something of himself in La Motta’s self-destruction and Raging Bull has proved to be one of his finest achievements. Filmed in black and white, there are occasional balletic fight scenes that provide contrast to the chaos of the fighter’s life outside the ring. Brother Joe (Joe Pesci) tells LaMotta at one point: “You start trouble for nothing.” Because of its graphic violence and misogyny, Raging Bull isn’t always enjoyable viewing, but, as a piece of cinema, it’s rightly considered a masterpiece.

1. ROCKY (1976)
My best mate at school claimed he cheered for Apollo Creed in the climactic fight in Rocky. Though we lost touch years ago, it’s safe to assume he now lives alone. Because how could anyone not root for Rocky Balboa (Sylvester Stallone)? He’s a tough guy with a good heart who lives a hard life. There’s bitterness that, through mismanagement and poor decision making, he’s a debt collector for a loan shark rather than a heavyweight contender, but not enough to turn his good heart bad. So good is Balboa’s heart he sees beyond the glasses and fringe that shield the girl at the pet shop from the world and, sensing he’s found another lost soul, Rocky seeks to make a connection with her. Then there’s the boxing… It’s ludicrously violent and bloodthirsty as Balboa and Creed (Carl Weathers) savagely smash each other’s heads back and forth like tennis balls. Despite being repeatedly punched very hard in the face, the moral victory is Balboa’s as he becomes the first to last the distance with the destructive champion. But who cares about moral victories when you get the girl?