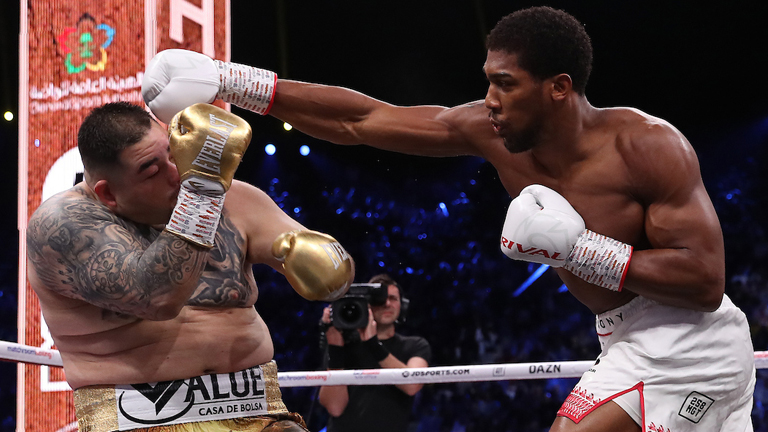 As Sky Sports prepare a flurry of pay-per-view heavyweight events, we take a look at their top 10 highest-grossing boxing pay-per-view events to date

As well as breaking the record for total number of pay-per-view buys, Joshua vs. Ruiz II was priced at £24.95, a new high for Sky Sports Box Office, which meant it raked in even more money on the night. The fight was a bit of an anti-climax, but everybody went home rich.

Joshua’s coronation night at Wembley Stadium attracted 90,000 fans to the venue and encouraged a further 1.5 million people at home to vote with their remote. It ended up being a classic, too, with Joshua rising from the canvas to finish Klitschko in the eleventh round.

Though it didn’t produce the thrills and spills normally associated with Joshua fight nights, a WBA, IBF and WBO unification fight against New Zealander Joseph Parker was a battle of young, undefeated heavyweights with plenty at stake.

At the time, this 2007 super-fight between Mayweather and Hatton was the king of all UK pay-per-views. It had everything: Britain’s most popular fighter versus the world’s best fighter. Both were undefeated. Both were legitimate. It was Box Office in every sense of the word.

The promise of a decapitation, or at least a knockout victory, had many following Haye into battle with Klitschko when the two met in a heavyweight unification in 2010. Sadly, though, Haye wasn’t able to produce when it mattered.

Thanks to the bizarre nature of the pair’s first fight, plenty were interested in seeing Bellew and Haye renew acquaintances in 2018. The fight, however, was about as one-sided as Bellew could have hoped.

This 2017 heavyweight title fight was originally meant to feature Joshua against Bulgarian challenger Kubrat Pulev, but Pulev pulled out through injury. His replacement, Takam, put up a good fight, pushing Joshua hard before being unfairly stopped on his feet in the tenth round.

This 2015 battle between the two biggest names in the sport promised a lot but delivered very little. In fact, save from one moment of Pacquiao success in the fourth round, it was essentially a sparring session for Mayweather, much to the disappointment of the millions who had invested in the storyline.

Although this one was billed as a professional boxing match, that term should be used loosely. In truth, McGregor, making his pro debut, had no right sharing a ring with Mayweather and even less chance of winning. He was stopped in the tenth.

In the first installment of the rivalry nobody saw coming, former cruiserweight and heavyweight champion Haye injured his Achilles heel only to then somehow drag himself through round after round before eventually being stopped in the eleventh.