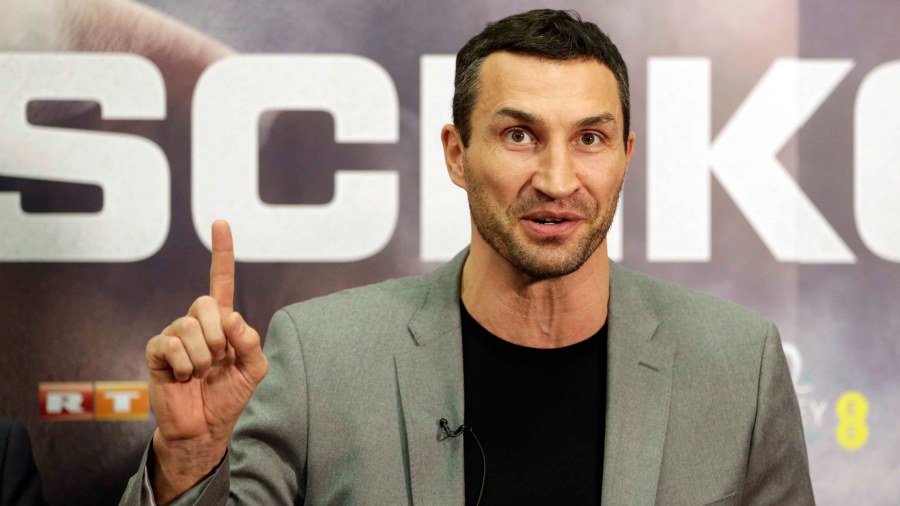 'I can knock people out with both hands,' warns Wladimir Klitschko. John Dennen reports

THERE were doubts that Wladimir Klitschko would fight Anthony Joshua. Where he was spurred on to get vengeance against Tyson Fury, there’s no personal animosity between the Ukrainian and Joshua. But while Klitschko may not be fired up for this fight in quite the same way he would be for Fury, nevertheless Wladimir seemed full of enthusiasm and confidence as he faced Joshua at Wembley stadium to announce their April 29 heavyweight world title fight.

“I have an adrenalin rush in the blood, honestly, and I love it. I love it. I’ve been missing it. I was very comfortable where I was. Even if I was preparing and I did all good and well,” he said but added, “The emotions and the adrenalin in the blood and the challenge [you feel like] you’ve got to make it. You’ve got to do it a third time. You’ve got to bounce back. With the perfect guy and it’s really measuring the skills because we are both skilled and I look forward to this challenge in the ring.”

Klitschko admits he was somewhat taken aback just to see Joshua at the press conference as the champion, with the IBF world title belt that the Ukrainian had held for so long. “It’s so familiar to me,” he thought. “That’s not yours.”

He insists the long time he’s had out of action, waiting for a rematch with Fury that never materialised, won’t affect him. In fact he draws on the example of his older brother, former WBC champion Vitali Klitschko. “This is the first time I’ve gone through such a long break in a quarter of a century. It sounds like I’m pretty old. But I don’t feel this way. Is it good? Is it bad? I heard from my brother that a four and a half year break, four and a half years, was good for him when he came back and fought for the title again. I didn’t know anything about it so it’s something that I’m going through right now,” Wladimir said.

He believes the chastening loss to Tyson Fury will have improved him. “With experience and motivation that I got from Fury and through failure in my fight,” he said. “I realised after only after so many years that actually I was not as motivated. When you certainly have to change things and do more to win, and not just wait when the opponent’s going to get tired, I think it’s all in all, was good that I lost this fight. Maybe sounds a little crazy, not good but I preferred to go in this fight with AJ because I knew it’s going to be a real challenge for me.”

However he had a warning for Joshua. “I think with age I got faster and better. My endurance got better, my speed got better, my anticipation got better. Until now I’ve seen progress,” he said. “It’s not just my opinion but it’s also the people that are close to me and observing me.”

“I can knock people out with both hands,” he added. “I do have a lot of weapons, one of them is the jab and of course I’m going to use all of them. It depends on how much Anthony’s going to give me to use and which weapon I’m going to choose to use during the fight.

“Well, he hasn’t really faced any tough opponents. He’s ready to go longer than seven rounds, the longest fight he had. All those questions will be answered during the fight… I think he’s ready.”

Klitschko’s over whelming motivation is to become a three-time heavyweight champion of the world. “I’m looking forward to doing it a third time. No disrespect or anything,” he said. “It’s going to be tough for both and I will be determined and obsessed with my goal to win.”