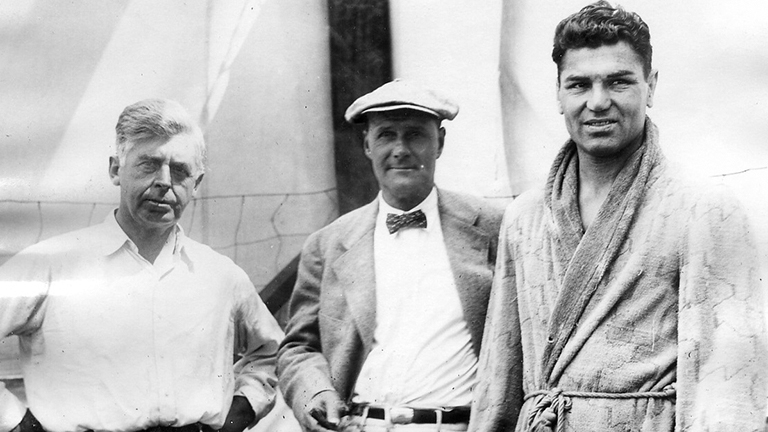 Record-breaking promoter Tex Rickard blew in from Kansas… and boxing was never the same again. Bob Mee takes a breathless look at the highs and lows of a legendary fight figure

WHAT kind of a man was this?

When Tex Rickard died, his body was placed in a $15,000 bronze casket and put in the centre of Madison Square Garden. Thousands filed past to pay their respects and get a last glimpse of the man who was the greatest boxing promoter of his, and perhaps any other, age.

Jack Dempsey, Rickard’s greatest success story, had held his hand as he died in a Miami hospital days past his 59th birthday. Dempsey, one of the toughest men ever to have held the heavyweight championship of the world, admitted: “I wept like a kid.”

Rickard was a lawman, a poker player, gambling hall proprietor, mine owner, cattle rancher in Paraguay, and a fight promoter responsible for five million-dollar gates.

His personal life was mysterious: was he married four times, as some sources say, or only twice? Was one of his ‘wives’ the infamous, beautiful Etta Place, who ran with Butch Cassidy and The Sundance Kid, then seemed to disappear into thin air? How fortunate was he to be acquitted of charges of assault and abduction – what would now be classed as paedophilia – when he was at the height of his fame in New York City in 1922?

Before Rickard came along, fights were chaotic, risky events where a man had to have his wits about him. Tex changed the face of the business, issuing tickets with prices, dates and seat numbers, employing security staff who ensured you got the seat you paid for. At least when he was the promoter, boxing became respectable, a place a man might take his lady without undue worry.

Tex had big men to work with, and made them bigger – big enough to loom across newspaper pages the world over. Rickard was the man behind the legendary heavyweight championship fight between Jack Johnson and James J Jeffries in Reno, Nevada, on July 4, 1910. And it was with Dempsey that he made the great fights that drew in those million-dollar gates against Georges Carpentier, Luis Firpo, Gene Tunney and Jack Sharkey.

The old descriptions suggest he was a grey-eyed, unemotional man who was a combination of new age sophistication and country boy hospitality. “I never seed anything like it,” was his recorded reaction to the sight of boxing fans pouring through his turnstiles.

People seemed to like him. Even Doc Kearns, who resented the way Rickard undercut him to get complete control of Dempsey, bore him no grudge. “He was simply playing his cards the way he saw them, always the gambling man, spinning the wheel with somebody else’s money riding on the line,” said Kearns.

George Lewis Rickard liked to say he was born in Kansas City, Missouri, but according to the 1870 census, when he was five months old, it was across the border in Kansas itself. His parents, Robert, who had fought on the Union side in the Civil War, and Lucretia, were living in Wyandotte, which is now part of the urban sprawl of Kansas City, with George and his elder sister, Minnie.

About four years later, they moved around 300 miles south to Clay County, Texas, near the border with Oklahoma, where Robert worked as a carpenter. By then the 10-year-old George was one of five children – and was still at school. Whatever domestic bliss they knew was shattered when his father died the following year, aged only 38.

Years later the story was accepted that he was orphaned, but the 1920 census shows his mother and one of his brothers were living under the name Adams in Washington State. He himself acknowledged this privately by including her and other members of his family in his will.

By 1894, at the age of 21, George was a marshall in the small town of Henrietta, Texas, a place that only a generation earlier had seen white settlers massacred by native Americans. He married Leona Bittick, the daughter of a local doctor, and was considered a tolerant, honest lawman.

Again, tragedy struck hard when Leona, still only 20 years old, died soon after childbirth in the spring of 1895. Their son died with her and it was said the whole community was in mourning.

By the following year Rickard had gone roaming, to the gold fields of the Yukon in Alaska, where he set up a gambling house. He had a reputation as a high-class poker player but on the other side of the table was said to have accumulated $500,000 in four years. His gambling nature meant he ploughed the lot into gold-mining claims that proved worthless. It was said while in Alaska he married a bar-room singer, but the details are obscure.

Tex enjoyed the risk of playing high – he once said he had lost his saloon in Alaska on a single hand of cards. This high-stakes addiction combined with a desire to scoop the profits of his own ventures led Rickard to try his hand in the fight promotion game. He was not a fight fan. When, at the height of his involvement with boxing in the 1920s, Nat Fleischer asked him to select the rankings for Ring magazine – a controversial move in itself – Fleischer admitted that outside the heavyweight division, Tex knew very few fighters. However, when he was involved in a major project, whether it was running a gambling house, cattle ranching or promoting a fight, he put his heart and soul into it.

Rickard’s first world title extravaganza, the lightweight championship between Joe Gans and Battling Nelson in 1906, was designed to bring a major sporting occasion to Goldfield, Nevada, where his latest business was based. When he raised the idea, the general belief that he could not promote such a thing fired him up. All his life, he loved nothing better than a challenge.

Rickard made a fantastic offer of $32,000 to stage the fight. To capture the imagination of the public, he piled a mountain of $10 and $20 gold coins in the window of his saloon, said to be the fight purse. Gans and Nelson fought for 42 rounds and gave Tex his first boxing profit.

By this time he had taken up with the woman who became known as his wife, Edith Mae, who always claimed to be born in Sacramento. Some said she was really Etta Place, the girlfriend of both Butch Cassidy and the Sundance Kid, who had left them to their fate in South America.

They adopted a daughter, who died, and they lived on the move. Tex had a gambling house in Rawhide, in the mountains east of Reno, and a copper mine further east in White Pine.

On July 4, 1910, he returned to boxing, staging the huge fight between Jack Johnson and James J Jeffries for the heavyweight championship in a specially constructed arena in Reno. There were a total of 36 bids to stage the fight. Rickard’s guarantee of $120,000 was not the highest – but he placed his on the table in gold. In this way he outmanoeuvred the highest bidder, Bill Garen for St Louis, Missouri, who had bid $150,000. But Rickard still had to win Johnson over, so he bought the champion’s lady companion a fur coat and advanced the always cashstruck champ $25,000 in $100 bills.

People flocked to see if Jeffries could come out of retirement and, as they saw it, restore the championship to the white race. He couldn’t. Johnson toyed with him and Rickard, who refereed the fight himself, rescued the old warrior in the 15th round.

Rickard did not see Johnson as a viable prospect, and by the following year was working a cattle ranch on the Gran Chaco plains in Paraguay. A US immigration form suggests he and Mae lived there from 1911 until 1914, and when they returned, it was to settle in New York. The immigration records also show they returned to Paraguay, via Buenos Aires, in 1918.

In between the South American stays, he drew a record indoor gate of $156,000 to Madison Square Garden for the heavyweight championship fight between Jess Willard and Frank Moran.

He expressed no great need to go down the route again until he was talked into it by ‘Doc’ Kearns, Jack Dempsey’s manager, over a long conversation at a New York restaurant. It was the early hours of the morning when Rickard cabled an offer of $100,000 to Willard – and of course the Manassa Mauler became the new world champion. A fired-up Dempsey destroyed the complacent, soft-bodied Willard in three brutal rounds in the open air in Toledo, Ohio, on July 4, 1919.

Rickard’s promotions attracted a higher class of clientele after 1920, when he staged a lightweight title fight involving Benny Leonard at Madison Square Garden for the benefit of a charity run by society hostess Anne Morgan. It was considered a glittering success.

The first of the million-dollar gate fights was at Boyle’s Thirty Acres in Jersey City, across the Hudson from Manhattan, on July 2, 1921 [above]. Dempsey, who had been smeared as a slacker in World War One, walked through Georges Carpentier, whom Tex had built up as a French war hero to provide the age-old bad-guy, goodguy scenario, inside four rounds.

Six months later Rickard’s world almost imploded when three girls between the ages of 11 and 15 accused him of committing sexual acts with them at a swimming pool and in an apartment on West 47th Street. He turned himself in. Two more girls, both aged 11, then came forward to support the others. At the initial hearing, magistrate George Simpson said the girls’ story “bore the imprint of truth.”

At the trial Rickard’s defence team managed to blacken the character of the youngsters, and alibis were provided to the satisfaction of the all-male jury, who threw out the case after only 90 minutes of deliberation. Mud stuck for a while and the next big Dempsey fight was not until September 1923, when Jack won a two-round brawl with Luis Firpo at the Polo Grounds before a crowd of 82,000.

While Dempsey took himself off to the glamour of Hollywood, remarried, spent time in Europe – and did not go near a ring for three years, Rickard, who had bought the original Madison Square Garden, opened a new, bigger arena in December 1925, two months after his wife Mae’s death. He was not alone long. Tex, by now 56, married a 22-year-old Broadway actress, Maxine Hodges, in 1926.

Dempsey’s return to the ring, when he lost to Gene Tunney, in Philadelphia, saddened Rickard, but business was business, and an astonishing 120,757 fans had paid to watch, which made a rematch inevitable. Jack had trained hard, but the good life and long layoff had taken the speed out of him – while Tunney, fit, focused and perhaps as intelligent a ring technician as there has ever been, might have given him all he wanted in his prime.

To persuade the public ring-rust beat Dempsey first time around, Rickard promoted him against Jack Sharkey in another million-dollar gate at Yankee Stadium in July 1927 – Dempsey won in seven rounds after trailing on points – and then 104,953 saw Tunney win the ‘Battle of the Long Count’ in Soldier Field, Chicago, in September 1927.

Tex and Maxine had a daughter, also called Maxine. He began to relax more, took up golf, and looked at business interests in Miami Beach. He was there with Dempsey at the start of 1929, working on a fight between Sharkey and Young Stribling, when appendicitis turned into peritonitis and the greatest promoter boxing had ever known passed away. He was 59.

Thanks a million, Tex.

SHOW ME THE MONEY