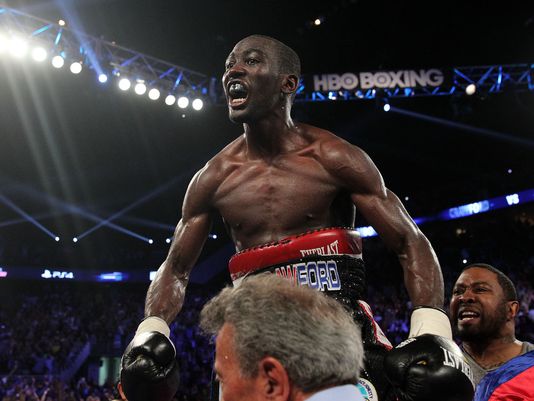 Crawford is expected to win but insists, “Dierry Jean is a good fighter. I am not overlooking him. There is a lot at stake for both of us. One of the secrets to my success has been to never look past an opponent or train less than 110% for a fight. It’s all about focus and keeping the blinders on. If you don’t respect the talents of the man in the opposite corner then you’re asking for trouble.”

But he maintained, “This will be my show on Saturday night. Jean will not dictate the fight to me.”

Jean has mixed in good company, at least in the gym, but Crawford dismissed that, saying, “Who cares if Jean sparred with Manny Pacquiao? That’s sparring.”

Crawford had a stellar 2014, winning the WBO lightweight crown, then defending against Yuriorkis Gamboa and Ray Beltran. “It was a great honor being the [2014] Fighter of the Year. It was so big. A lot of great fighters never won it and for me to win it at such an early age is quite humbling,” Terence said.

He stepped up a division to win the WBO’s super-lightweight crown this year, adding, “Bodywise, I feel comfortable and much stronger at 140 than I did at 135.”

Crawford concluded, “I feel great being home in Omaha. I can’t think of a better place to make the first defense of my junior welterweight world title. It’s going to be a great fight and a great event. I am so Omaha. I wear it on my trunks…on my sleeve…and in my heart.”