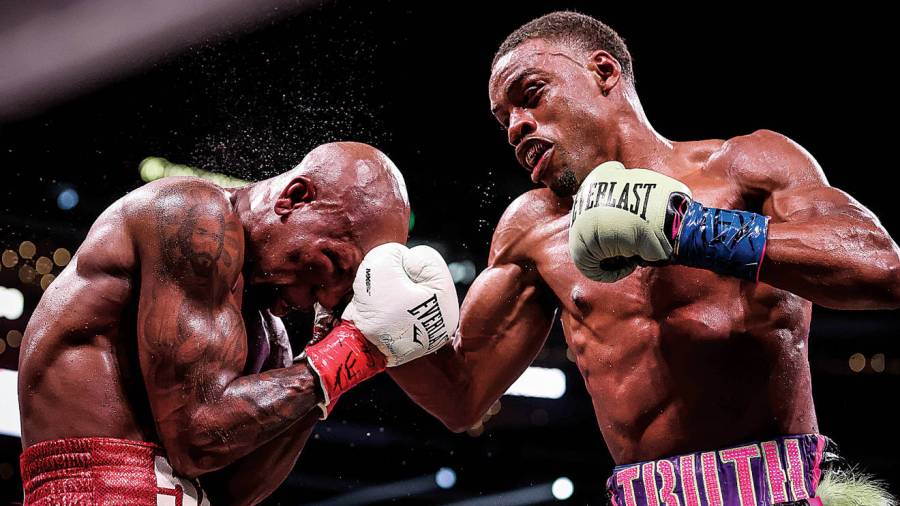 HOPEFULLY Errol Spence Jnr has finally come to the realisation that there is only one fight out there for him that truly interests the public and for the sake of his legacy must happen next. Spence can continue to perform brilliantly, as he did in stopping Yordenis Ugas at 1-44 of the 10th round in front of 40,000 people at AT&T Stadium on Saturday. He can boast that he added Ugas’ WBA welterweight belt to the other two he already holds. It simply does not matter. The only thing that does is he boxes Terence Crawford next. Anything other than that will be completely unacceptable regardless of the reason.

Spence took a gentle step in that direction by calling out Crawford right after the match, but his history to this point would indicate those are hollow words. Despite being rated behind Crawford on all pound for pound lists, Spence feels he deserves a greater percentage of the revenues based on him holding three sanctioning body belts to Crawford’s one. Crawford is holding firm on purse parity. It is a road we went down not too long ago with Floyd Mayweather and Manny Pacquiao. Eventually they did box, but by then both were past their best thus diminishing both the significance and quality of the fight. Hopefully Spence, 32, and Crawford, 35, understand the clock is ticking. It is getting to the point where it is now or never if it is to be a mega fight.

This was a no nonsense performance from Spence, who resides in Desoto, Texas, and he was boxing in front of his home crowd. If he had not already done so, Spence quickly erased any lingering doubts about whether the horrific car accident he had been in had taken a little out of him. Right from the opening bell the southpaw carried the fight to Ugas who simply could not match Spence’s speed and work rate. Spence jabbed and unloaded with hard two-handed combinations to the body. Ugas went downstairs effectively as well and landed some looping rights to the chin which got Spence’s attention, but through the five rounds the favourite appeared to have won them all.

In the sixth, Spence suffered a near disastrous mental lapse when an uppercut knocked his mouthpiece out. Instinctively Spence dropped his hands and relaxed thinking referee Laurence Cole would call time for it to be retrieved, but the third man made no such directive. Ugas took advantage and tagged Spence with a right that sent him reeling into the ropes. Suddenly Spence was in trouble. However, Ugas’ momentum was taken away by Cole who then called time despite there being no lull in the action that moment. In all likelihood, Spence would have rode out the storm without the intervention, but Ugas was clearly deprived from following up.

With the crisis having passed, Spence not only went back on the attack but upped the ante. In the seventh round the Miami-based Cuban retreated for the first time when his right eye started to rapidly close. Later we would learn that the orbital bone had been fractured. Spence was pouring it on, not content for the match to go the distance.

Two minutes into the eighth the action was stopped for the medic to check the eye. Ugas was allowed to continue but was on borrowed time.

A desperate Ugas rallied toward the end of the ninth with some big blows under and over, but Spence calmly reset and was dominating in the 10th, when timeout was called again. Ugas argued he was fine, but by now the eye was virtually completely shut. It was wisely stopped.

For 12 rounds Lithuanian, Eimantes Stanionis and Russian Radzhab Butaev engaged in a physically taxing match from close quarters. When all was said and done, Stanionis emerged with a split decision garnering the votes of judges’ Robert Hoyle 117-110, and Jose Roberto Torres 116-111. Javier Alvarez had it 114-113 Butaev. BN had Stanionis up 115-112.

Not an easy fight to score. Both landed brutal body punches throughout. Stanionis powerful jabs probably were the difference. Referee Rafael Ramos deducted a point from Butaev in the 11th round for pushing down.

With the victory Stanionis won a WBA welterweight title that had been held by Butaev. Yes, the WBA has more than one ‘world champion’ in the division. Not only that, both of them fought in separate bouts on the same bill. For the sake of reporting this insanity must be mentioned.

At 40 it is apparent that age has caught up to Yuriorkis Gamboa who was stopped by Mexico City’s Isaac Cruz at 1-32 of the fifth round of a scheduled 10.

Cruz is raw, unpolished, but very strong, powerful, and relentless. After giving Tank Davis all he could handle last year it appears that Cruz can figure in some meaningful fights down the line. Every punch he threw against the Cuban, it was with full force.

After rocking Gamboa badly in the opening round, Cruz dropped him in each of the next three. Gamboa was well beaten when referee Mark Calo-oy called a halt.

Seattle’s Jose Valenzuela scored a sensational one punch, one round knockout against Mexico City’s Francisco Vargas in their scheduled 10. As they were feeling each other out, Valenzuela connected with a looping left hook that sent Vargas crashing. The whiplash the Mexico City fighter experienced from hitting the canvas made it immediately apparent that he would be in no condition to continue. Without having started a count, the referee halted the contest, the time being 1-25.