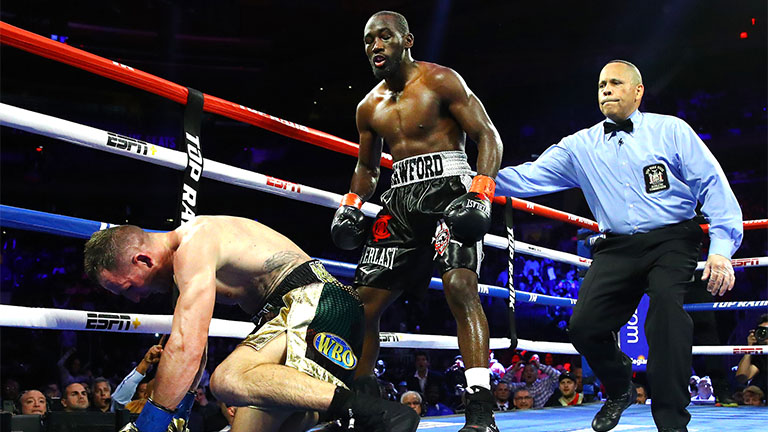 TERENCE CRAWFORD dispatched another challenger for his WBO welterweight title. At Madison Square Garden in New York on Saturday (December 14) he knocked Egidijus Kavaliauskas down three times on his way to securing a stoppage win in the ninth round.

“I thought I had to entertain ya’ll for a little bit. He’s a strong fighter, durable, and I thought I’d give the crowd something to cheer for,” Crawford said. “I wasn’t hurt at all. I got up and went straight to him. I wasn’t hurt by no means. I walked through everything he threw all night.”

Crawford wants to secure a big name opponent, which could prove tricky given that Manny Pacquiao and Errol Spence are represented by rival promoters. Crawford however declared, “I’m not ducking anyone on the PBC side or Top Rank platform. I want to fight all the top guys.”

Teofimo Lopez scored a stunning win when he ripped the IBF lightweight title away from Richard Commey in just two rounds. “I’m at a loss for words right now. This is a dream come true,” Lopez said. “[Commey] is a bad man. His shot could’ve done the same to me if he hit me with that shot.

“You all know who I want to fight next. 2020 is going to be a big year. ‘The Takeover’ has arrived, and you haven’t seen anything yet.”

Vasyl Lomachenko and a battle for the undisputed lightweight crown is Lopez’s target.

After a controversial loss to Russia’s Vladimir Nikitin in the last Olympic Games, Michael Conlan rematched him over 10 rounds as a professional. Conlan took a points win, 100-90, 99-91 and 98-92 for the judges.

“It was a lot of pressure going into that fight, but it’s nice to get it done. I just needed to get that one back,” Conlan said. “I needed to right this wrong. Full credit to Nikitin, who fought his heart out. There’s no bad blood. There never was. Now, we can put this chapter of my career behind me.”