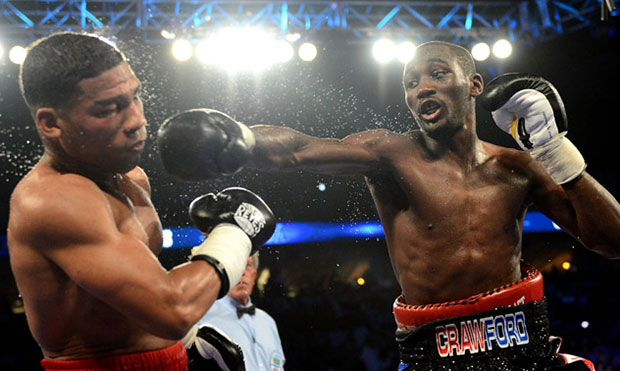 TERENCE CRAWFORD will never allow himself to have an ‘off night’ in the ring as he prepares for his super-lightweight unification fight with Viktor Postol on July 23.

The 28-year-old is widely regarded as one of the best fighters in the world, having won the WBO title at lightweight, and currently holding the WBO 140lb title.

Postol, the WBC champion, announced himself as the division leader when he beat Lucas Matthysse in October and Crawford is working diligently to ensure he will be in peak condition come fight night.

“I take no opponent for granted and I take nothing in training camp for granted.  We are by the book in camp.  We skip nothing in gym training or conditioning,” he said.

“It’s a fulltime job.  You have no idea what it takes on a daily basis to get myself to the level I achieve on fight night.  I cannot afford an off night.  It’s unacceptable and it’s dangerous.  No one is going to give me anything in a fight.  I have to earn it the old-fashioned way and that’s by taking the fight to my opponent and winning it.”

When considering the threat Postol will pose to his unbeaten record, Crawford would not commit to labelling the Ukrainian as his toughest test to date, though paid respect to his adversary.

“On paper you could make a case that Postol will be the toughest man I have faced inside the ring, but I won’t really know that until I fight him on July 23,” he continued.

“When I go into camp, I always assume the opponent I’m training for will be my toughest test.  It’s the only way I know how to train.  I respect any fighter who laces up the gloves and enters the ring to battle with me.