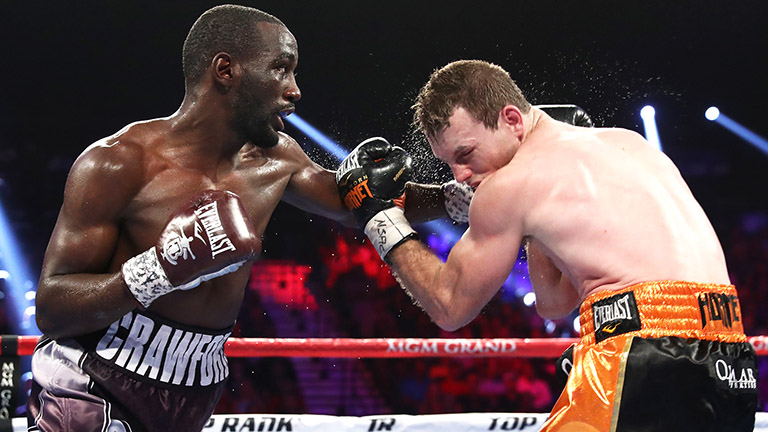 TERENCE CRAWFORD defeated Jeff Horn, the conqueror of Manny Pacquiao, to win the WBO welterweight world championship at the MGM Grand in Las Vegas on Saturday.

Crawford became a three-weight world champion when he forced the stoppage at 2-33 of the ninth round.

“He was hard to tag and he just kept me guessing. He’s a classy fighter who fought a great fight,” Horn said afterwards.

His trainer Glenn Rushton added, “Crawford was just sharp in there. He kept on countering Jeff’s shots one at time.

“I thought there were some close rounds in there, and it was definitely a premature stoppage. He got hit harder by Pacquiao.”

On the undercard Jose Pedraza outpointed Antonio Moran over 10 rounds at lightweight, to set himself up as a possible opponent for WBO champion Ray Beltran in August. “The key was to attack the body. I wanted to attack the body a lot more, but I took advantage of the cut on his nose and decided to go up too. I definitely want a world title opportunity. Puerto Rico will have another world champion very soon. I’m bringing the title home,” Pedraza said.

On the bill Jose Benavidez knocked out Frank Rojas in the first round and top prospect Shakur Stevenson stopped Aelio Mesquita in two rounds.