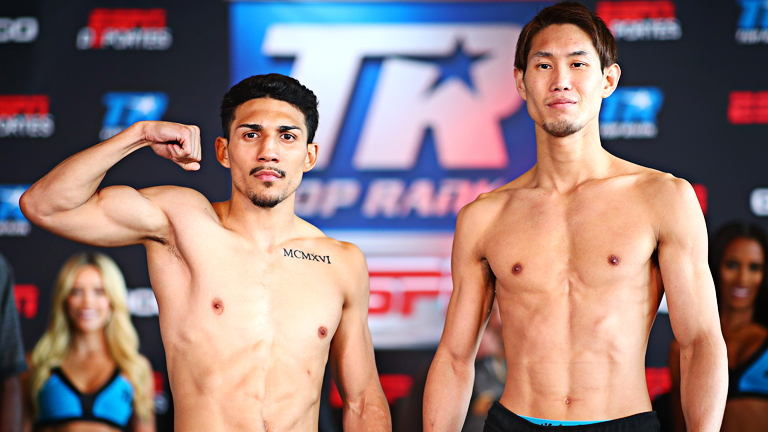 Teofimo Lopez is on the fast track to a world title shot. Standing in his way is a fellow unbeaten fighter, Masayoshi Nakatani

IF Teofimo Lopez is to reach the heights he expects to then the likes of Masayoshi Nakatani will need to be beaten impressively. But the slick Japanese fighter, 30, is ambitious himself.

A professional since 2011, the Osaka man was elevated to fighting at 12-round level three years later when he came through a battle with Yoshitaka Kato, taking the OPBF lightweight strap.

A September 2017 win over Ryan Sermona (rsf 4) was impressive and highlighted Masayoshi’s own sense of confidence as he showboated his way to a spiteful success.

However, this is his first foray out of Japan and Lopez’s promoters, Top Rank, are unlikely to go out of their way to be overly hospitable.

Lopez is yet to go 12 rounds so question marks must remain about his stamina and, if he doesn’t score a stoppage in the opening six, and if he’s tight at the weight, this could turn into a difficult night for the favourite.

“The weight is not an issue. I’ve been working with a new nutrition team, Perfecting Athletes, and they have made all the difference. I’ll be able to make lightweight for a few more fights,” says Lopez.

But with absolutely everything likely to be in his favour, it’s hard to pick against Teofimo Lopez progressing.

Lopez isn’t short of confidence: “I see myself as a performer in the ring, and I am coming to the MGM National Harbor to put on a show. I have respect for Nakatani because he is undefeated like me, but nobody is going to stand in my way.”