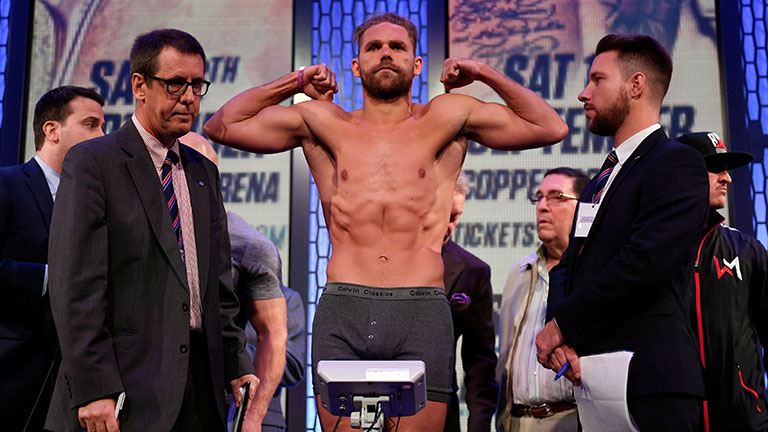 UNBEATEN WBO champion Billy Joe Saunders and heavy-handed challenger David Lemieux both made weight for their middleweight clash tomorrow night (December 16) at Place Bell in Laval, Canada, but only after Lemieux was forced to weigh in twice by Saunders’ trainer, Dominic Ingle.

Following Lemieux’s first trip to the scales – which was announced as a successful one – an animated Ingle reacted angrily. Seemingly unconvinced that Lemieux had actually made the weight, he demanded that the Canadian weigh in again. With Billy Joe’s promoter, Frank Warren, watching on intently, Team Saunders were content that all was above board when Lemieux hit the scales for a second time.

After Lemieux had weighed in, Saunders goaded the Montreal man, before stepping onto the scales himself. Like Lemieux, the Hatfield southpaw came in dead on the middleweight limit (160lbs), although both men had to strip naked in order to do so.

FOR THE IN-DEPTH PREVIEW OF SAUNDERS-LEMIEUX, INCLUDING OUR OFFICIAL PREDICTION, DOWNLOAD/PICK UP A COPY OF THIS WEEK’S BOXING NEWS.