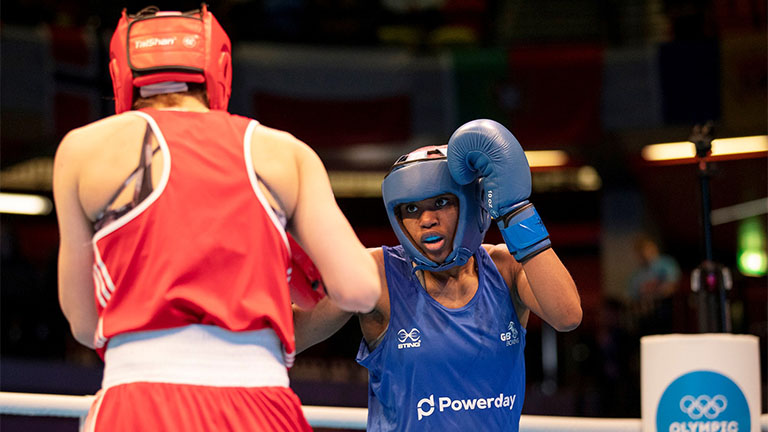 GB's Caroline Dubois is victorious, while former professional world champion Delfine Persoon has already been eliminated after her first bout at the Olympic qualification event

CAROLINE DUBOIS, the teenage hope of the GB team, was the first to box for Britain in the European Qualification Event on Saturday (March 14) and boxing in her first senior bout.

She took on Belarus’ Ala Staradub in the opening contest at the Copper Box in London. Dubois eased herself into the bout, standing off as Staradub came forward. But Dubois began to apply her southpaw jab, scoring with it regularly before bringing in quick combinations to pop straight punches through Staradub’s defence.

Her opponent still tried to rough up the young Briton, pulling Dubois’ head down and even trapping her arm at one point. None of it bothered Dubois who steered herself to a unanimous points victory.

“I give myself a C performance. It was okay, definitely not the best,” Dubois said.

“It was definitely as tough as I expected it to be. I believe that at senior level all the girls are good, there’s no rubbish girls,” she continued. “They’ve all got women power, they’ve all got experience.”

Dubois is due to box the world’s leading lightweight boxer, Finland’s Mira Potkonen, next, on Tuesday March 17.

“Mira Potkonen obviously number one seed but she’s only got two hands, two legs, same as what I have,” Dubois said. “If anyone’s got pressure on them it’s Mira Potkonen, she can’t get beat by a 19-year-old.”

The appearance of former professional world champion Delfine Persoon on the Belgium team raised some eyebrows. But her Olympic adventure ended in her first bout at the qualifier. Greece’s little known Nikoleta Pita eliminated Persoon on a split decision. Persoon looked surprised at the result, but she had been left marked up under her eye.

The Czech Republic’s Kevin Godla dropped Italia’s Francesco Maietta on his way to a victory that books him in to fight Britain’s Peter McGrail on Monday (March 16). That bout will decide which of them goes to the Olympic Games.