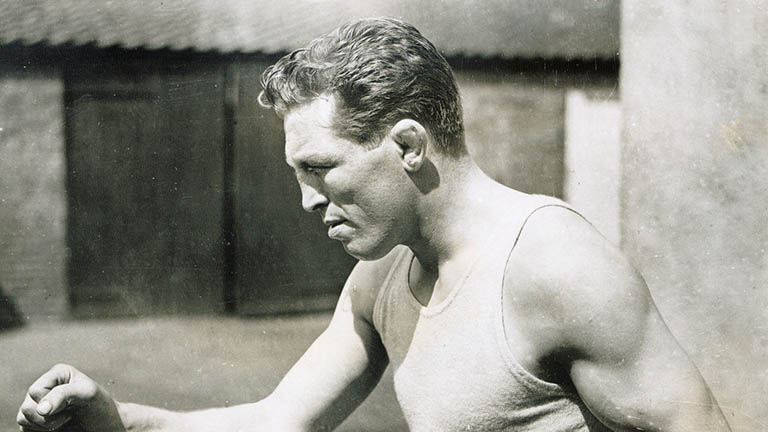 We examine the bizarre alliance between Ted Kid Lewis, a Jewish boxing legend, and a notorious fascist and anti-Semite

WHITECHAPEL, east London, 1931. A large throng of working-class men – their heads mostly covered by cloth caps – listens intently to a smartly dressed man with battered features. His Cockney voice booms through the crowd and is clearly audible in the British Movietone newsreel clip I am studying via YouTube 89 years on. “Today, my friends, I want to tell you why I have joined the New Party,” he says before extolling the merits of the party’s leader, the notorious fascist and anti-Semite Sir Oswald Mosley. The puzzling thing about this clip is that the speaker is none other than East End boxing legend Ted Kid Lewis, a Jewish former world champion who was an idol to Jewish people everywhere.

Fans of the hit BBC TV series Peaky Blinders will be familiar with Mosley – or at least with the overblown caricature of him seen in series five of the show – when Peaky Blinders kingpin Thomas Shelby is cajoled into joining forces with Mosley with predictably dire consequences. This is not unlike the situation Lewis found himself in back in the early 1930s.

Lewis had fought his last contest in December 1929, and it was around this time that he met Sir Oswald and Lady Mosley at a cocktail party. According to Lewis’ son and biographer, Morton Lewis, the ring legend was bewitched by the personal magnetism of Sir Oswald, a former Tory and Labour MP who was starting his own political movement. A brilliant and sublimely confident orator, some were tipping Mosley as a future Prime Minister. Ted knew little about politics but felt flattered when this distinguished man asked about his fighting career and his childhood in the Whitechapel slums. Mosley seemed to sympathise with the plight of East Enders and claimed one of his aims was to combat poverty in the area.

Mosley promptly offered Lewis a job as a physical training instructor to his New Party, along with a role as his personal bodyguard. For a time, Lewis accompanied Mosley on the campaign trail before deciding that being a bodyguard was not for him. Instead, Ted recruited a team of minders from among the many tough men he knew in London’s East End to protect Mosley at political rallies. Then came the most astonishing development of all. Lewis, a hugely popular figure in his home district, agreed to run for parliament as a member of the New Party for Stepney and Whitechapel.

Morton said that Ted was warned by friends to steer clear of Mosley, but the ex-champ dismissed any suggestions that the New Party was anti-Semitic. But while Lewis may have been easily fooled by Sir Oswald, the East End wasn’t. When Ted recited speeches on the streets where he had played as a child, he was dismayed to find insults hurled at him by the very people he felt he represented. His campaign was a disaster and he polled a pitiful 154 votes.

It should be said that the ideas Mosley and the New Party were proposing in 1931 were not overtly fascist or anti-Semitic, but before long the hideousness of Mosley’s ideology became clear as he openly espoused anti-Semitism. Sir Oswald followed his election failure of 1931 by forming the British Union of Fascists the following year, an organisation whose paramilitary stewards, “the blackshirts”, were regularly involved in violent altercations with Jewish people, most notably in the 1936 Battle of Cable Street.

According to Morton, upon discovering the true nature of Mosley’s politics, his father visited Mosley, flattening him and four of his henchmen during a confrontation. This seems unlikely, yet Morton’s motive for concocting such a story would be understandable. After his dalliance with the fascist leader, it took Lewis years to restore his reputation in the eyes of Jewish people. Eventually, though, he achieved redemption.