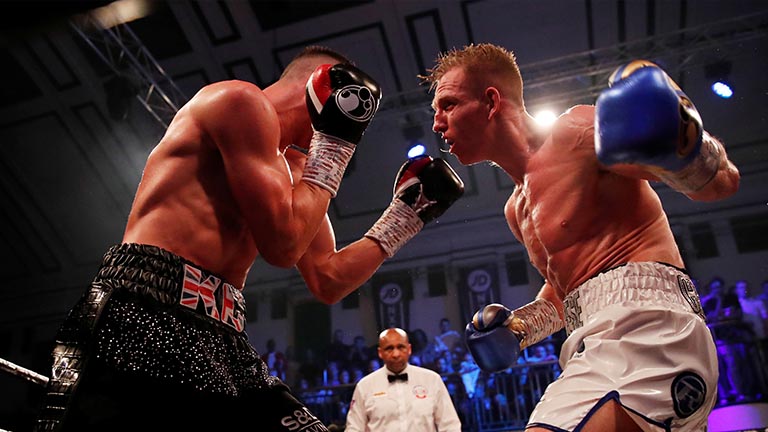 THE triumphant return that was predicted for Bermondsey’s British super-welterweight champion Ted Cheeseman didn’t quite go to plan as he was held to a 12-round draw by the untried Kieron Conway inside a hot and sticky York Hall in Bethnal Green, London.

Ted Cheeseman, who admitted he had been been battling a gambling addiction for most of his adult life following a painful points loss to European king Sergio Garcia in February, started brightly but was pegged back as the action progressed. At the end of the Ian John Lewis-officiated bout, one judge felt he’d nicked it (115-114), another favoured Conway (116-113) while the third couldn’t split the two warriors and tabled 114-114 to confirm the draw.

Cheeseman, now 15-1-1 (9), scored with impressive hooks during the first quarter, one from his left hand in particular caught the eye in the second round. Yet Conway shook off the effects of another in the fourth and by the fifth, the 23-year-old underdog’s impressive counters had drawn blood from the Londoner’s nose.

Conway, from Northampton, was expected to fold in the second half but he rose to the task impressively, picking holes in both Cheeseman’s defence and reputation. His superior reach troubled the champion and, to Cheeseman’s surprise, Conway had significant success inside.

Conway, 12-1-1 (3), had never before been past eight rounds and was beaten in the semi-finals of May’s middleweight Ultimate Boxxer event by eventual winner, Derrick Osaze, over three rounds. Yet the drop in weight seemed to suit him and, despite taking several meaty punches from Cheeseman, refused to be overawed as he produced the classier punching.

“The Big Cheese”, to his credit, was typically relentless and appeared on course to retain his title as a huge uppercut scored in round eight. The pressure mounted during the closing rounds but Conway, visibly exhausted, found the strength to turn the tide again in the final session, rocking Cheeseman with an uppercut of his own.

Craig Richards secured a shot at the British light-heavyweight title when he outpointed previously unbeaten Andre Sterling over 12 rounds. “Spider” scored a knockdown in the sixth en route to being named the winner on the cards, with scores of 117-111, 116-111 and 115-112 all in his favour.

Conor Benn survived a difficult opening round against Finland’s Jussi Koivula before dramatically turning up the heat in the second to finish his rival in the second.

Journeyman-turned-domestic contender Anthony Fox notched his third successive victory when he widely outpointed 10-0 Duane Sinclair via a 79-73 margin at light-heavyweight.