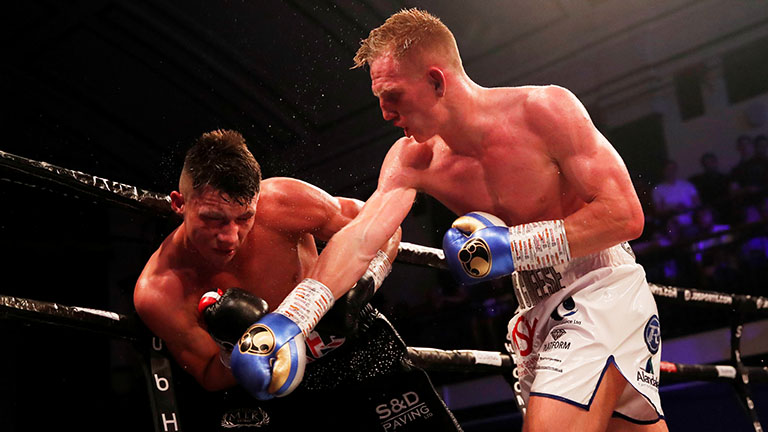 TED CHEESEMAN hung on to his British super-welterweight crown with a split draw against Northampton’s Kieron Conway at York Hall.

After 12 absorbing rounds, pitting the champion’s aggression against the challenger’s elusive boxing, judge Marcus McDonnell scored for Conway by 116-113, Terry O’Connor had Cheeseman ahead by 115-114, and Robert Wiliams had it 114-114.

With the judges split like that, anyone can be right – and anyone can be wrong. I thought Conway might have edged it, but I wouldn’t argue with the draw – and all credit to Cheeseman, who rallied like a champion from the 10th when it seemed to be slipping away.

The pattern was set from the first – Cheeseman (Bermondsey) pressing, Conway moving and countering, catching the champion as he came in. And when Cheeseman did get close, Conway was happy to stand and trade.

After nine rounds I thought Conway was heading for a shock win – but the champion came out strongly for the 10th, and now there were signs Conway might be fading. Twice the challenger was forced back against the ropes, and held on – and Cheeseman kept up the pressure in the 11th, definitely landing more.

But Conway had saved something for the last, and they put up a strong finish – Cheeseman coming forward, Conway moving and countering. Conway finished with a graze below the left eye – and at the bell Cheeseman raised his arms in triumph, Conway didn’t. Both can be proud of their showing, and there must be a return.

The shorter Sterling – 10-0 going in – did well for five rounds, coming close, scoring, and moving out of danger. But a right to the head dropped Sterling by the ropes in the sixth, and he was under pressure for the rest of the session – which ended with Sterling taking stick on the ropes.

Sterling (New Cross), now sporting damage beneath both eyes, made a big effort in the seventh – but really the tide had turned, and Richards (Crystal Palace) used his height and reach advantages well over the last four. It was Richards’ fifth win since his sole defeat – a points loss to Frank Buglioni in a British title bid – and now he’s won a second chance.

Conor Benn kept his unbeaten record, and the WBA Continental welterweight title – but Finnish challenger Jussi Koivula had his moments before going down twice and succumbing in the second of a scheduled 10.

Koivula started fast and Benn (Ilford) seemed taken by surprise, grabbing when Koivula came close. Benn tried to rally, but was caught by a left-right.

Benn roared out for the second, and Koivula hit back – but was dropped by a combination to the head. He beat the count, but Benn’s follow-up had him down in his own corner – and when Benn opened up again, referee Williams waved it off after two minutes. Unrequired judges were Terry O’Connor, Erkki Meronen and Jesus Morata Garcia.

Last time out, former Commonwealth featherweight champion Reece Bellotti dropped a split verdict to Ryan Walsh in a British title challenge. Six months later to the day, he launched his comeback with a fourth-round KO of Nicaragua-born Josue Bendana (based in Spain).

A left hook to the body put Bendana down in slow motion, and referee Kieran McCann counted him out at 2-13 of the fourth. It was scheduled for six.

Bendana tried but Bellotti dominated from the outset, scoring with jabs at long range and digging in body shots in close. Bendana came out aggressively for the fourth but was caught as he came in – and then Bellotti fired in the body shot that finished it.

After an indifferent start, Westbury’s Anthony Fox is coming good. Going into his bout with Croydon’s unbeaten Duane Sinclair he had won his last two, most recently flooring and outpointing Welshman Morgan Jones at Merthyr Tydfil – and he handed Sinclair his first defeat, referee Mark Bates scoring their eight-rounder 79-73.

Sinclair tried to create space, and counter, but just couldn’t keep Fox off. Fox pressed forward all the time, and Sinclair was frequently forced to cover up.

Sinclair launched a big attack in the seventh, but Fox hit back. Fox was backed up against the ropes, and held on – but quickly regained the initiative, scoring to the body.

Fox kept up the pressure in the last, and was a good winner.

Otha Jones III (Toledo, Ohio) made a winning UK debut on this Matchroom promotion, flooring and halting Michael Horabin (Mottram in Longdendale) in one minute 40 seconds of a scheduled six.

Jones opened up quickly, and a big left hook to the head had Horabin down. Jones’ follow-up was delayed when referee McCann warned him for hitting low – but when Jones resumed the attack he was landing at will, and finally a sweeping right dropped Horabin on his back. Mr McCann stopped it at once.

In a women’s six-twos, Watford’s Shannon Courtenay halted Latvian Valerija Sepetovska at 1-17 of the second.

Sepetovska tried to fight back but was under constant pressure, and a right to the head put her down in the first. The visitor came out bravely for the second but was soon in more trouble – and was taking stick when referee Bates stopped it.

Charles Frankham (Crowthorne) had an easy win over Latvian Ilgvars Krauklis in their scheduled four. An innocuous-looking left-right to the head put Krauklis down and he sat out referee McCann’s count, jumping up when it finished. Time: one minute 43 seconds of the first.

The Verdict Cheeseman-Conway must go on again.