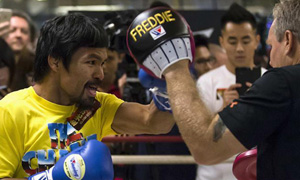 MANNY PACQUIAO’S next opponent will be revealed next week amid reports that the Filipino superstar will fight former gym mate Amir Khan in May.

It had been believed Pacquiao would fight Australian Jeff Horn next, but a report in The Times claims terms have been agreed for him to travel to the UK and fight Khan.

While Pacquiao’s promoter, Bob Arum, has slammed the reports as ‘bulls***’, Pacquiao’s adviser, Michael Koncz, preferred not to dismiss them out of hand.

“At this time, I’d prefer not to comment as I don’t want to cause anymore controversy, so I can’t confirm or deny anything” he told Boxing News.

“Everything about Manny’s next fight will be revealed next week.”

However, a source from Khan’s team told Boxing News: “Nothing to report from Amir’s side or imminent with his next fight announcement.”

The word from Australia is that a delay in confirming a Pacquiao-Horn fight is down to finalising a location – either Brisbane or somewhere in the United Arab Emirates.

Given the money being offered by representatives in the UAE, Arum claims Pacquiao is seriously considering fighting there. Manny even said so on his official Twitter account, though he also ran a poll asking his fans to choose his next opponent. Khan won the poll, trumping Horn, Kell Brook and Terence Crawford.

Horn previously revealed that he had accepted terms and was ready to secure a fight with Pacquiao, who is hoping to do a ‘world tour’ as he winds down his incredible career.

Khan was chasing down a fight with Pacquiao or Floyd Mayweather before the two superstars clashed in 2015 and last May finally secured his dream marquee clash when he challenged Canelo Alvarez for the WBC middleweight title. Khan was knocked out in five rounds and has not fought since due to undergoing surgery to remedy a long-standing hand injury.

Talks were held for him to collide with domestic rival Kell Brook, but they once again fel through. Instead, Brook will fight Errol Spence toward the end of May in the UK. According to The Times, Pacquiao-Khan is headed for May 20, potentially in Khan’s home town of Bolton or at the Manchester Arena.