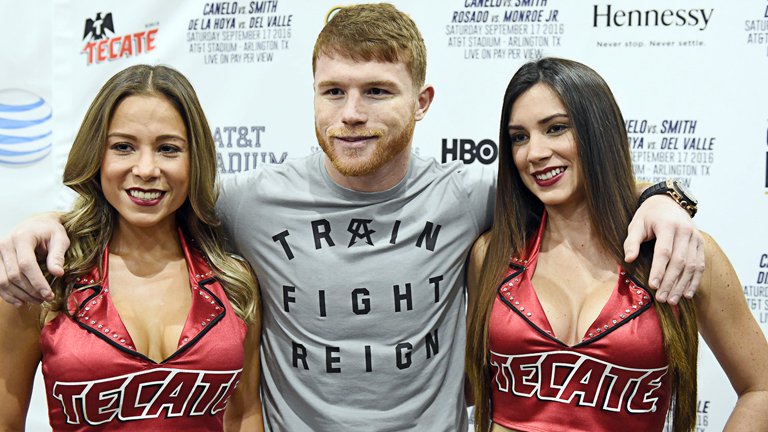 Golovkin-Canelo just won't go away and neither will Floyd Mayweather

AS expected, the talk during the Liam Smith-Canelo Alvarez fight week turned to Gennady Golovkin, the middleweight terror forever linked with the Mexican. Golovkin thumped a brave Kell Brook into defeat in the fifth round in London on Saturday night, and several observers suggested that the Kazakh’s performance – which saw him take a lot of shots before emerging victorious – may have persuaded Alvarez to pursue a Golovkin-Canelo showdown sooner rather than later.

Chepo Reynoso – Canelo’s trainer – admits they watched Golovkin-Brook, but shrugged when pressed on his opinion of the middleweight’s performance.

“Reaction? There was no reaction, we just watched the fight,” Reynoso said. “We knew what the outcome would be.

Canelo has been widely criticised for failing to agree terms to fight Golovkin, particularly after promises to do so were made after he beat Miguel Cotto in November last year, and Amir Khan in May. But for now, Golovkin is not on Team Canelo’s mind.

“When it’s the right time to make comment of Golovkin we will,” Reynoso continued. “Now isn’t the right time. We have total respect for Liam Smith and his team, and we won’t make any comments on any fighter other than Liam Smith. This is the fight we have in front of us. After September 17, if victorious, ask any questions you want. But right now, this is all about Liam Smith.”

Reynoso later admitted that Alvarez would like a rematch with Floyd Mayweather, the currently retired superstar who inflicted Canelo’s only defeat via 12-round decision in 2013.

“Of course, of course,” Reynoso said when asked if Mayweather-Alvarez II might happen.

To which Joe Gallagher, Liam Smith’s trainer, said: “Or Smith-Mayweather I.”