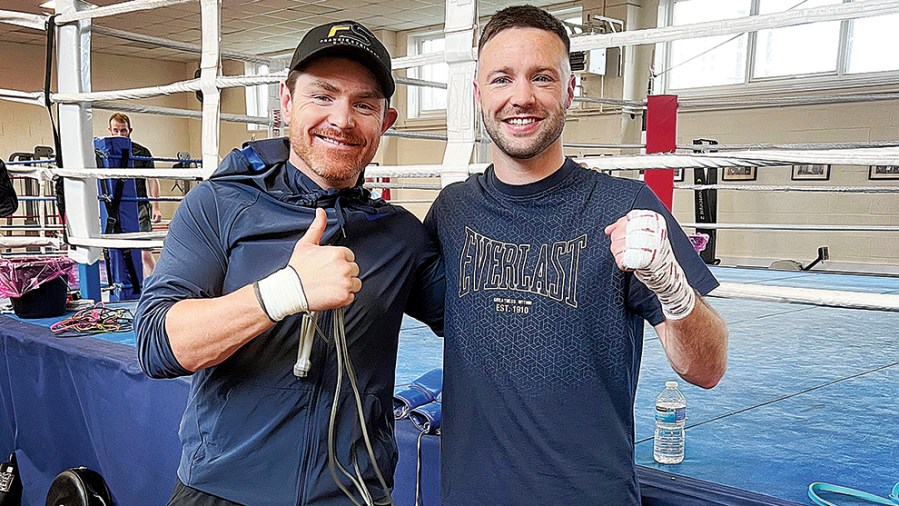 Joe McNally was last week confirmed as the new trainer of world champion, Josh Taylor. This is the story of a journey McNally feared was over long before it really began, writes Chris Walker

BECOMING a trainer was never in Joe McNally’s plans when he set out on his boxing odyssey as a schoolboy. A star amateur who can count James DeGale and Adonis Stevenson as his vested rivals, McNally was part of the Merseyside boom that turned Liverpool’s waterfront arena into a boxing hotbed for a sustained period from 2008 onwards.

Frustrated with false promises and multiple wasted training camps, McNally made a quiet exit from the sport in 2011 after yet again being told he was no longer required for a bill on which his place had previously been confirmed. The departure was intended to be a permanent one, but boxing’s magnetic pull, especially for those directly involved in its daily rituals, was too powerful for McNally to resist.

“My pro career was a tragedy. It was a sad story,” says McNally, now one of boxing’s most sought-after coaches with Josh Taylor and Liam Smith two of his prized students. “I listened to the wrong people. I listened to my heart instead of my head. I had to put up with people just basically trying to make a c**t out of me. It’s fair to say I hated the sport.”

Making his professional bow in 2007, 14 months after his ABA final loss to DeGale, McNally enjoyed a solid start as he bolstered his ledger throughout various Northwest venues synonymous with the British small hall scene. Registering the attention of Dave Coldwell and Adam Booth, key figures at the thriving Hayemaker Boxing, McNally was about to be exposed to larger audiences.

Through Hayemaker’s association with Setanta Sports, McNally’s profile would increase as he occupied a slot on the undercard of David Haye’s maiden heavyweight test against Monte Barrett. McNally would feature on the incredible Tony Quigley-Tony Dodson event four months later before disaster struck as Setanta went into administration in June 2009 leaving Hayemaker without a television outlet.

“The collapse of Setanta is when I made the biggest mistake of my career. I was speaking with Dave Coldwell and Adam Booth, and they were telling me to be patient and that they still wanted to have a big say in my career. Instead, I went around and had a listen at what other people had to say and I found it difficult making the best decision for my career.

“Richard Poxon was with Ricky Hatton, so I had a few conversations with him. I went down to Frank Maloney and told him that I wanted to get in the ring with the likes of Sam Webb and Brian Rose. These were guys that I knew from the amateurs, I beat Rose, and I wanted to have those fights on the way up because I didn’t want to wait around just fighting journeymen after constantly being in hard fights as an amateur.”

Despite insisting today that he should’ve remained with Coldwell and Booth as Hayemaker plotted their next move, McNally would instead sign with Hall of Fame promoter Frank Warren for the final bout of his eight-fight career. Facing Bertrand Aloa on the Paul Smith-Degale undercard in December 2010, McNally scored a tight win as he set his sights on a prosperous 2011.

“All I wanted was a meeting with Warren because he was the man putting all the shows on. He’d signed all the lads from the 2008 Olympics, he had loads of ABA champions, and he knew how to build a fighter. I was at an Amir Khan show and I seen Bellew there and told him I’d like to speak with Frank, Bellew just got me from my seat and took me all the way down to ringside and told Frank all about me. That was pretty much how I got with Warren.”

Excited to close in on domestic and Commonwealth title opportunities, McNally couldn’t achieve the activity of his career infancy. Spots on multiple undercards were withdrawn and with growing resentment to a sport he had dedicated himself to from an early age, McNally reached breaking point in the summer of 2011.

“I was on bills, training hard in the gym with George and Danny Vaughan, and suddenly Dean Powell would just ring with me bad news. I was begging Dean to make a fight with me and any of his top lads just so I could put myself in the shop window. I was pulled from a show. I told Paul Edwards he could have all my stuff and I was gone from boxing. I never went back.

“My head was battered with it all. I was used to the structure of the amateur game where you know what days you’re training, when you fight, and you even get a few hundred quid off Sport England for it. Now I was in the gym preparing for a fight knowing full well that I could get a call two weeks before it telling me I’m not needed. F**k that. That’s not for me.”

Absent from the only industry he ever wanted to be a part of, McNally had no alternative plan. A chat with Mick McAllister, a vital cog in the illustrious Rotunda club’s machinery, convinced McNally to lend his expertise to the Merseyside youngsters performing the sacred drills that brought him, and many others, international acclaim on the amateur circuit. Although satisfying, McNally still couldn’t view boxing without considering what might’ve been.

“It was great of Mick to provide me with some purpose. It’s what I probably needed at that time as helping out with the juniors in the gym was something I took seriously. It was when I was watching John Ryder and Nick Blackwell fight that I wanted to come back. I believed I was capable of beating both and a phone call with Joe Gallagher had me back in the gym.”

Returning to active competition after a near five-year absence, McNally knew immediately he wasn’t the same fighter. Constant praise from Gallagher, perhaps a motivational tool to convince McNally to stick to his comeback plans, worked in small doses, but McNally knew his time was up even though Gallagher had secured him the opportunities he had always craved.

“I’d like to thank Joe Gallagher because he pushed for me like nobody else. He didn’t just get me in the gym, he got me a three-fight deal with Eddie Hearn with a British title shot at the end of it. No one in the pro game ever went out for me like that apart from Joe and I’ll always be grateful for that because it meant a lot to me, and it showed me that there are good people in boxing even though a lot of them are rats.

“Joe put a lot of time into me when he had one of the best stables in the country, but it wasn’t just in the gym he was helping me, he was also looking to get me busy and get me belts. Even though we got on great, I just wasn’t the same fighter. I couldn’t give it my all for some reason. I was on my way to get my brain scan done and I just turned around on the Dock Road halfway there. I didn’t get the scan and that was me done with wanting to fight.”

Still armed with an enthusiasm to succeed and possessing a thirst for coaching, McNally explored the idea of training professionals. Under the wise tutelage of Georgie Vaughan at Derry Mathews’ City Centre gym, McNally saw first-hand what went into the guidance of exciting prospects such as Sam Maxwell and James Metcalf, but it was a chance meeting with David Price that convinced McNally to be independent.

“I was away with the lads on Stephen Smith’s stag do and Pricey was there. We’d been around the same shows for years as amateurs, but we didn’t really know each other that well. He was speaking about his career and what could’ve been done differently, and I was giving my opinion on some of his fights. I made it clear to him that I had big goals as a trainer and the next thing was that he wanted to come and work with me.”

Enduring early setbacks with crushing losses against Alexander Povetkin and Sergey Kuzmin, Price’s stint as top-level fighter was undoubtedly over. Still somewhat of a huge attraction in Britain due to his high profile and fan-friendly style, there were still battles for Price to overcome as he scored several wins under McNally’s guidance including an upset victory when dominating Dave Allen. A loss to Derek Chisora in 2019 signalled the end of their run together as Price stepped away.

“If I had David a bit earlier, it excites me to think what he might’ve achieved because he could’ve been a world champion. I genuinely believe that no matter what people think. There was good nights and bad nights with him, but I don’t believe I ever had the best version of him due to the stage of his career he come to me. I seen so many good things with him in the gym, but it wasn’t enough against the likes of Povetkin. It was a pleasure to be around David, but I just wish we could’ve had more time together.

As well as Price, McNally also impressed with Craig Glover and Thomas Whittaker-Hart, leading to other fighters basing themselves at McNally’s gym in his old stomping ground, Rotunda. Smith, Taylor, and Caoimhin Agyarko are all now fighters receiving the benefits of McNally’s methods, and along with assistant trainer, Declan O’Rourke, McNally, still only 38, has plenty of time on his side to add to his growing list of accomplishments.

“I’m blessed to have the set up I’ve got here to be honest. The gym is great, the fighters do as I ask them, and Declan is the perfect coach for me to work alongside as he’s able to help me with my workload and I can count on him for anything. I’m learning every single day on this job, I’m studying the old teachers like Eddie Futch and Bouie Fisher. I want to be successful, but as long as my fighters get in this sport, make a few quid, reach their potential then get out, I’ll always be a happy man.”