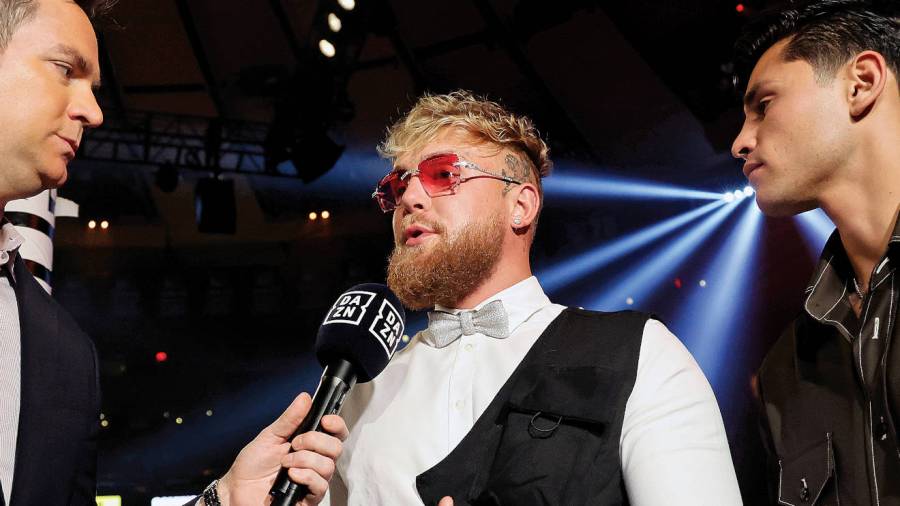 POST-FIGHT press conferences don’t often produce much in the way of major news or soundbites. It’s often a lot of “we’ll wait and see what’s next” and the fighters will have (usually) just gone through a gruelling ordeal. They are an opportunity for these fighters, in particular the winners, to say their piece after the hard work is done. They can reflect on the outcome of the fight, their training camp; anything really. After the two main events this past weekend, Amanda Serrano – who lost her fight – and Shakur Stevenson – who won his – were both upstaged during their press conferences with the media.

Serrano had just come through one of the greatest fights in the modern era as well as making history as one half of the first female fight to headline at Madison Square Garden. Despite this, some of the press in attendance took it upon themselves to focus on her promoter, Jake Paul, asking him about the likes of UFC star Conor McGregor.

This isn’t surprising given that both Paul and McGregor make headlines, but this doesn’t make it any less shameful. Though she had lost, the decision was a split one and Serrano had come incredibly close to defeating Taylor. The focus should have remained on her.

The media should have known better but Paul also should have found a way to park his truck-sized ego for 20 minutes or so to ensure his fighter got the attention she deserves.

It wasn’t just at the post-fight presser he and some members of the media were guilty of this, either. During fight week there were countless interviews with Paul about who and when he is going to box next.

He even took to social media the day after the fight to seemingly announce the date of his next fight. While many have praised his involvement in getting Taylor-Serrano made, it seems more and more as though this has merely been a means to further promote himself.

It was Taylor herself who perhaps said it best just days before the fight. “As far as Jake Paul [goes] this isn’t a game, this is actually a real fight. He’s never been involved in a fight like this and he never will be involved in a fight like this. So this is actually a genuine, real fight and he knows nothing about this,” she told the DAZN Boxing Show.

For Stevenson, the disruption to his post-fight conference at least didn’t come from his own promoter or the media. About halfway through Stevenson becomes distracted by some sort of commotion toward the back of the room. He then swiftly places his belts on the floor and runs over to the scuffle.

It’s hard to tell from various videos on YouTube who or what started the brawl, but Stevenson reportedly ran over to ensure his family wasn’t harmed.

Whatever the case, it’s embarrassing that Stevenson had to deal with this mere moments after he had proven himself a truly elite fighter.

DAZN and ESPN both deserve credit for ensuring their main events didn’t take place at the same time. They were both big fights and it’s a sign of real progression that fans didn’t have to choose which one they would watch live.

We’re also in the midst of a pretty incredible period for the sport in the modern era. This past weekend came right after Tyson Fury’s win over Dillian Whyte and this coming weekend we’ve got the sport’s biggest star, Canelo Alvarez, taking on one of his stiffest possible tests in the form of Dmitry Bivol.

Sky Sports, by virtue of their deal with Top Rank, had the UK broadcast rights to Stevenson’s win over Oscar Valdez. Even this is a boon for British fans given that it wasn’t that long ago Josh Taylor’s world title fight with Jose Ramirez wasn’t available on any major platform here.

In terms of the coverage itself, the main thing to note is the DAZN commentary. It’s been noted in this column several times how difficult the job of commentator is, but DAZN’s US team dropped the ball during Taylor-Serrano.

They seemed particularly biassed toward Serrano and one of their unofficial scorecards had her winning five of the first six rounds.

One moment that the broadcast did pick up came moments before the opening bell. Taylor and Serrano were facing off in the middle of the ring as the referee gave his instructions and a grinning Serrano could be heard saying “this is crazy” to Taylor.

She was referring to the occasion and the thousands of fans inside the sold out Madison Square Garden creating a cauldron of noise in anticipation for their fight. Even Taylor, usually so stoic, couldn’t resist breaking her staredown of Serrano to take it all in.

One of the more surprising stories of the past week came from former heavyweight king Wladimir Klitschko. He of course remains in his home country of Ukraine to help defend it against Vladimir Putin’s invasion. But he also spoke to BILD in the wake of Fury’s most recent win.

“I learned that despite the war, you shouldn’t forget life. Sport is part of my life. I’m delighted that Tyson Fury won,” he said.

“Who knows, I don’t want to promise anything big here, but if I’m in good shape and, above all, that the war in Ukraine will soon come to an end, and that our borders exist without any invasion coming from Russia, then in the end who knows?”

He has teased a return to the ring a few times before though they always felt like just that; a tease. These comments seem slightly different given the context he made them in. Clearly he still has ambitions in the sport, but for now his focus is understandably on the war in Ukraine.

May 7
Canelo Alvarez-Dmitry Bivol
DAZN
Coverage begins at 1am