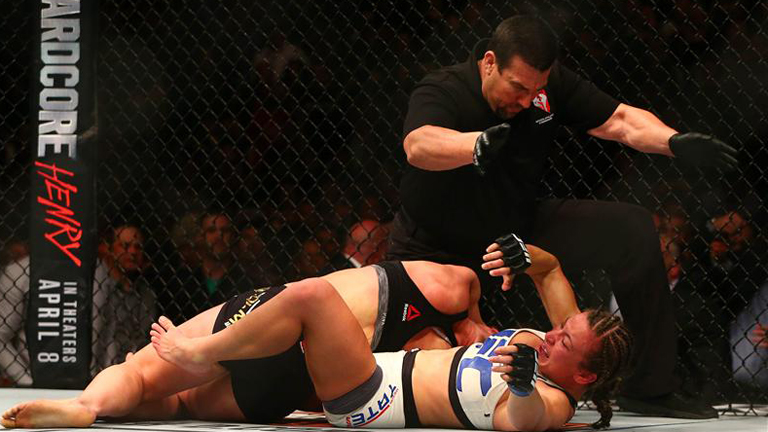 WHO would be a referee in professional combat sports? From controversial decisions (see the Bisping – Silva KO, non KO!), late stoppages, early stoppages, to being in amongst the flying fists, feet, blood and sweat; this seems to many like a thankless task, be it in MMA refereeing or boxing.

Fighting Fit caught up with BAMMA referee Daniel Movahedi, known as ‘The Gentleman’ for his friendly and fair style, and over the coming weeks we will bring you the ins and outs of being the other man in the cage.

From the age of 16 Daniel has done pretty much everything in Mixed Martial Arts; from fighting to promoting (he co-promotes Fury MMA) to working behind the scenes. He is now a highly respected MMA official. So why does someone decide to be an MMA ref and could you, our readers, become one?

“I kind of fell into it [refereeing]. There was a show at The Scala in Kings Cross. It was mainly a Thai boxing show with two MMA amateur fights on the bill. At the time I was training at Team Titan, and they asked me if I’d like to ref on the show as they knew I’d been around MMA for a number of years and been involved behind the scenes at Cage Rage. I was training MMA and knew what to expect from an MMA bout. It was two amateur fights, and I’m not saying the responsibility was less, but there was less to look out for, they were first time fighters. It was a good platform for me to start my referee career.

“Following on from this show, refereeing became something I fell in love with and I began to get more involved. I began to work on bigger shows like London KO and UCMMA etc. and this lead me to where I am today. On this journey, it has been key to have an involvement in the sport, to trust myself and be confident in the decisions and calls I have had to make. I’ve been in the sport since the age of 16, and I’ve been lucky enough to have great people to act as mentors, people like Grant Waterman, Leon Roberts, Mark Woodard, Mark Goddard – the big names (in British MMA) they are the guys who refereed my fights or were officials on shows where I was working. I’ve always looked at them and knew if they were doing it right and I followed their path, I’d end up doing it right as well.”

In a relatively new sport like MMA, I was keen to know if there was any specific training a budding referee would need to undergo to become a ref in the UK. “At the time (when I started) there wasn’t anything specific you had to have. Most of the guys who started when I did fell into it too. You relied on the guidance of other officials showing you what you needed to look for. If you had questions you could go to them. Today you have the opportunities to go on courses to help referees. You’ve got the UKMMAF judges course and refs course. These are are highly thought of. You have a starting ground. You go, do a weekend course and work your way up. You begin refereeing at amateur level where you have to get a certain amount of amateur fights under your belt before you can referee pro fights. Today there are more ways to educate yourself, courses to go on and ways to learn rather than figuring it out yourself or modelling yourself on other referees. UKMMAF are seriously trying to set themselves up as the UK governing body and sanction events in the UK. They sanction BCMMA, BAMMA and other major events. In my mind that’s the way forward”

So could someone without fight experience do it?

“Yes, you can go and do the course and call yourself a ref, but I’d say that experience is important; I don’t think you can just go on a course and then say ‘Right I’m going to referee’. If you’re thrown in the deep end, and you don’t do all the amateur fights etc. then you don’t have the experience that I believe is essential to being a good referee. Some people referee a few fights and decide it’s not for them. It’s a highly pressurised role, you have two people’s health and safety in your hands. If you want to become a good referee you have to work your way up.

“It isn’t a case of doing a two day weekend course and thinking you can go and ref on the big shows. The good thing about having a governing body is that they can guide you on where to go, what to do, what events to referee on and so on.”

A fighter gets to the highest level, which in MMA is the UFC, by winning fights. Referees are often considered good if they don’t get noticed, so I’ve often wondered how a referee could go from small hall UK show to becoming the next Herb Dean or ‘Big’ John McCarthy…

“The guys in the UK working on UFC have been refereeing for ten plus years (I’m in my eighth year now) and the advice that these guys give me is to keep doing what you’re doing. As long as I do a good job, make good calls, it may happen but it may not [getting the UFC call]. It would be nice to ref in the UFC, it’s the NFL of MMA, but there are other events out there. I’m work for BAMMA; that was a goal of mine to work on Europe’s biggest show and I’m blessed enough to be able to referee there. You also have other major events like WSOF so it’s not just about the UFC. Nowadays there are loads of shows but I guess there are loads of referees too.

“In England the amount of MMA shows have rapidly increased, so there are chances for a referee to make his way to the UFC but it is all about experience, you can’t bypass that. Someone may come along and get fast tracked, go to the UFC but crumble under the pressure because they haven’t had the experience on the smaller shows, dealing with difficult situations. My advice is there is no quick fix and referees should stick together. Everyone has their own goals but as far as officials go we should back each other.”