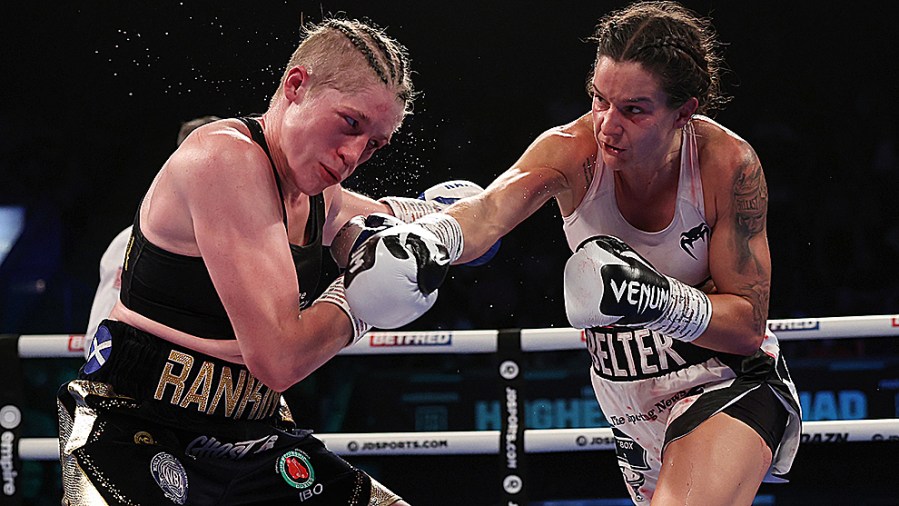 Women’s boxing highlights where the men are letting themselves down, writes Derek "Sweet D" Williams

IN THE business world theory suggests that flexibility and satisfaction are among the primary competitive advantages SMEs (Small and Medium-sized Enterprises) have over larger rivals. Their structures are simpler and leaner, giving them the ability to respond to change and make decisions faster than more powerful but cumbersome businesses. They tend to be closer to their customers and more in touch with what is needed to satisfy them, in theory at least.

Apply this as a metaphor to women’s boxing and its male equivalent and you get an idea of where I’m going with this. Women’s boxing is the SME, which is currently demonstrating the greater capacity to satisfy the specific need of its consumer – to see the biggest fights available – despite its lower bargaining power. While the men’s side is the rich, giant company that enjoys a dominant and linear position in the market with its customers (us) and suppliers (boxers), which doesn’t always see the need to change if the money continues to roll in.

In 2022, boxing’s SME has just begun to gain some traction in a market that has been reluctant to get behind its product in the past. Okay, enough of the business speak for now. To put it more plainly, women’s boxing has already delivered on one of its biggest matchups with the classic between Katie Taylor and Amanda Serrano in April, which saw two historic firsts: it was the first women’s fight to headline the hallowed Madison Square Garden in its 140-year history. The first ever $1 million pay cheque received by each woman made it the richest women’s boxing match to date.

In a couple of weeks arguably the most anticipated fight in the history of women’s boxing and possibly one of the most coveted in all of boxing right now, Clarissa Shields versus Savannah Marshall, will take place in London and unlike Taylor-Serrano, their middleweight unification clash, which headlines the first all-women card, rescheduled by a month because of the death of The Queen, is borne out of discord and true rivalry; a decade-long one. Natasha Jonas, herself a double-world champion, predicted beforehand that Shields-Marshall would redefine women’s boxing such is its magnitude.

The raucous build-up to the original date was gold. If you prefer your big fights to come with a large side of acrimony, then Shields and Marshall delivered. We were presented with two of the best fighters in the sport, in their primes, with oil and water personalities that irritate the hell out of each other, both undefeated and absolute in their belief that they can beat the other. The self-proclaimed GWOAT versus the only women to have beaten her.

But even their rivalry was outstripped by the outright dislike on display between Alycia Baumgardner and Mikaela Mayer. Suddenly there were two huge fights, and this became the one I really wanted to see. Watching the final press conference and the apparent readiness and willingness of the top four women to go to war and put it all on the line it was hard not to feel frustration at the men’s side for its inability to do the same.

When it comes to making the biggest fights, men’s boxing has quite frankly, under delivered. It’s not just this year either. So far in 2022, there has been one major fight, which was Canelo v Golovkin 3, and it’s a fight that wasn’t came about by demand, considering Canelo was coming of a loss to Dmitry Bivol and Golovkin is 40 and in terminal decline. A sizeable chunk of the endless debate and discussion which is dedicated to the sport is generally about fights that are not being made or those that didn’t get made when they could or should have. Tyson Fury might fight Anthony Joshua in December, likewise, Errol Spence and Terence Crawford could finally share a ring, but would anyone be surprised if neither fight materialised?

Don’t get me wrong, it’s not all about mega fights; important fights are still happening. The ones that shape divisions, progress careers, etch boxers in the history books and give the sport continuity, but boxing fans crave seeing the biggest fights possible. Where the elite emerges, and legends are made. This no longer happens and worse still, there appears to be a half-heartedness by boxers, promoters and the networks to collaborate closely enough to improve the current malaise. It’s the big company effect again. Successful and cash rich, but slower to respond to its market’s needs.

Like so many things boxing has long been the province of men and women female participants have inevitably and somewhat unfortunately been judged by the historical standards set by men’s boxing. This means the boxing public at times has been dismissive and baulked at the frequent mismatches and world titles won by boxers without much experience.

The winds of change have been blowing for a decade since London 2012 and now there are Olympic champions and ladies with deep amateur pedigree who are fighting for and winning some of those world titles early on in their professional careers. The Shields-Marshall card, alone, has two Olympic champions on it – Shields and Lauren Price – and will feature a bevy of Olympians. The depth and creditability are far greater than it used to be.

There are going to still be women fighters who are fast tracked on to world level as the talent pool continues to fill out or must grasp opportunities in different weight classes that presenter far greater risk. Less than a week ago Terri Harper climbed three weight divisions to beat Hannah Rankin, someone that I managed at the start of her career and who has already fought both Shields and Marshall, for the WBA super-welterweight title. In doing so she emulated Natasha Jonas who did precisely the same thing earlier this year and won the WBO junior-middleweight strap.

In the UK, the platforms, which are necessary for the sport’s growth appear locked in to supporting it. Boxxer and Matchroom have particularly strong stables of women fighters and guarantee the of exposure Sky Sports. The BBC has joined the party with its first ever live broadcast of a women’s professional boxing match this Friday. The huge viewing success of England’s lionesses winning the European Championships was admittedly the cursor for making the decision to air female boxing, but it is still an encouraging addition. As is Susanna Schofield who is the promoter for the show.

This continued investment bound together with the top women being ready and willing to take on each other – out of their weight class if necessary – and an expanding fanbase, it seems this SME is ready for even more growth in 2023.

*In collaboration with Wayne Cyrus