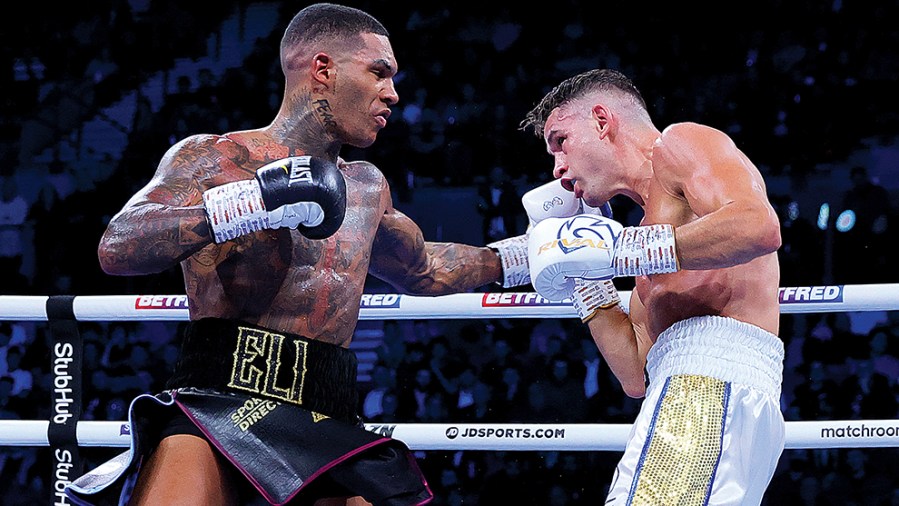 Stop acting surprised and take steps to sort it out instead, says Derek Williams

ONE OF the most striking things that I noticed from the fall out of Conor Benn failing a drug test was the level of naivety amongst those in and around boxing. The naivety in continuing to respond to positive PED tests on a case-by-case basis as if there haven’t been enough to suggest that PEDs are prevalent in the sport. The naivety in blithely accepting the decentralised and confusing governance of drug testing throughout the sport. The naivety in believing that well-known boxers aren’t interested in gaining an unfair advantage. They’re athletes after all and aside from winning and losing, athletes do cheat. People cheat.

The fact that there was so much denial and substantial benefit of the doubt given to Benn was further evidence that those who work in the sport and its supporters haven’t really grasped the idea that PEDs have become a major problem in boxing. Who wants to talk candidly and expansively about the real possibility of some boxers being unnaturally enhanced in an inherently dangerous sport, when they can discuss pound-for-pound rankings, A-sides and B-sides and who’s ducking who on loop?

It’s as if using performance enhancing drugs is a dark art that has somehow swerved boxing. Aren’t PEDs supposed to be something hypertrophy fitness kings and queens on Instagram use, or which turn up in other sports like athletics, cycling, weightlifting, baseball etc? Sure, we can understand Ben Johnson and Lance Armstrong being drug cheats, but their boxing equivalent isn’t supposed to exist. Jarrell Miller was just a wrong un’ wasn’t he? Canelo Alvarez and Tyson Fury just ate the right animal in the wrong place. Us boxing folk don’t do supplements; we gulp raw eggs at dawn, chop wood and chomp on steak and potatoes to stay strong.

PEDs are rampant in sports and boxing is no exception. With the primary benefits of taking them being the acquisition of greater endurance, muscle mass, strength, and recovery, one (should) assume boxing a is fertile ground for them.

One thing boxing has been exceptional at doing is focusing our gaze on the fighters and little else, distracting boxers and fans from the sport’s wider failings. Huge names like Roy Jones and James Toney, Erik Morales and Fernando Vargas have been caught using PEDs. Shane Mosely’s admitted to knowingly taking steroids. They were allowed to emerge without much damage to their reputation and legacies, but they’re just a thumbnail of the issue.

Unfortunately, for the optimistic and the obstinate who can’t bring themselves to fully absorb the mirky reality of PEDs in boxing – at all levels – and the possibility of their favourites succumbing to the temptation of using them, how boxers prepare is a lot more nuanced than it used to be. Boxers train like athletes now.

Traditional regimens that once consisted of roadwork, sparring, hitting the heavy bag and some groundwork have been expanded to include working with strength and conditioning coaches, nutritionists, and physicians. Recovery has become more valued than repetition. What goes in the body must have a function. The detail is more granular than ever and is rarely controlled by a single head coach.

Maybe it’s the sanctity of men and women submitting their bodies and minds to blunt force trauma to earn money and provide us with entertainment in one of the most primal and unforgiving sports, that makes boxing reluctant to accept it’s just like other sports that have their rules broken by people willing to cheat.

We’re told it’s too early to label Conor Benn a cheat. ‘Hope there’s a simple explanation for this’. ‘Let’s wait for the B sample before judging’. ‘He wouldn’t do that; he has too much to lose’. These were some of the rationales used to defend Benn in the immediate aftermath.

On him having too much to lose, I wonder what Ben Johnson would think of that as a reason not to take performance enhancing drugs.

He forfeited a gold medal, his career, future, and global creditability after testing positive at the Seoul Olympics. Johnson’s failed test remains the most high-profile drugs scandal in the history of the Games, and possibly all of sports. It was an absolute head scratcher at the time. Why would he risk it and on the grandest sporting stage of all?

The answer(s) are not hard to find. Johnson wanted to gain an edge on his competition, to fulfil his dream of being the best and to reap the financial rewards that come with that. Temptations like these can offer the chance of a different life and overwhelm an athlete’s desire to stay ‘clean’.

Coercion shouldn’t be discounted in cases of PED use. Competitive sports men and women are predisposed to believing that ‘coach knows best’. Fans of Benn who protest his innocence will likely have considered a scenario where the boxer has fallen prey to manipulation of some kind. Chris Eubank Snr thinks it’s highly plausible that Benn was coaxed into taking a banned substance.

It’s extremely forgiving of Eubank Snr – who protested vehemently about the fight taking place out of concerns for his son’s health – to come to the defence of an opponent accused not playing straight, and who since the news broke has reportedly been investigated for another failed test. Eubank Snr will have his reasons for doing so, but to believe that Benn was coaxed into taking enhancing drugs is to tread a thin line between being extremely hopeful or delusional.

The flipside to those that back Benn is, of course, those who don’t. The condemners. Some asserted that PEDs have no place in boxing and anyone using them should face an automatic ban. There was the faction that thought Benn’s actions were amoral, considering the weight concessions that Chris Eubank Jnr had made and the health concerns that shrouded the match-up as it got closer.

Others focused on the intention. Had he knowingly used enhancements to help him combat Eubank’s natural advantages? Minds have rewound to when Benn began to show a seriously destructive streak in the ring. Where did that level of punching power come from? It wasn’t evident in his earlier fights. Former opponent, Chis Algieri, revealed that he’d heard that Benn was a ‘dirty’ fighter. While another, Chris van Heerden, did the rounds on Podcasts to admit the psychological affect getting blown away by Benn had on him, and expressing his doubt that Benn was clean.

All fair questions and points, but would they have watched Benn-Eubank Jnr had it gone ahead? Most probably. Because it’s always about the two fighters with boxing, the attraction, nothing else. The barely existent infrastructure, the shadiness and the wayward moral compass of those who run the sport can be forgiven if a big fight is made and copious amounts of revenue is generated.

There shouldn’t be a diversity of views when a boxer fails a drugs test. His or her future should be decided purely by science. Considerations of their status and ability to put bums on seats and make fans purchase pay-per-view programmes should be dispelled and not render their failed tests inconclusive.

But who’s going to adjudicate this? Where does the creditability come from to make the sport adhere to stringent rules? The British Boxing Board of Control’s handling of Benn’s test was disastrous. It was transparent and hasn’t given any answers. To be involved in a scenario that became so toxic and demeaning to the sport in the UK, has surely got to compromise its authority and the perception from the outside. The Board clearly has limits to what it can rule on and enforce, so who and what does? The time to find out and take action is now.