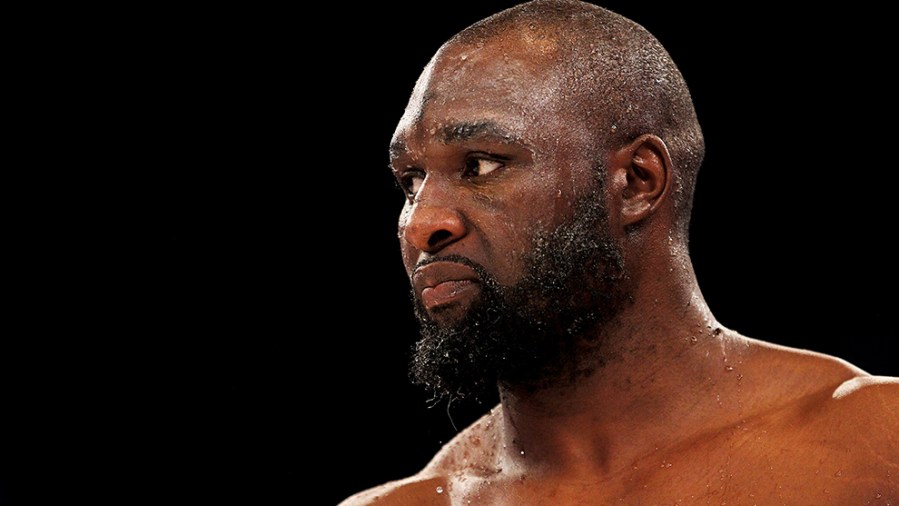 IN THE immediate aftermath of Derek Chisora’s punishing defeat to Tyson Fury, there was an outpouring of concern over Derek’s long-term health from fans, the media, talking heads and even other fighters. He took a sustained beating for 10 rounds from Fury, who even in second gear and damage limitation mode, doled out the leather. Chisora is the ultimate heavyweight warrior, yet he thanked the referee for saving him – and hopefully not to fight another day, but to retire.

It’s not the sort of fight you wanted to see from a 38-year-old warhorse, who’s beginning to leave pieces of himself inside the ring, so gruelling are his fights. There is a decent chance though that Derek has heard the calls internally and externally and, regardless of his initial wish to fight again, will take the hint and retire sometime soon.

However, there is another British heavyweight, a former opponent of Chisora’s, who refuses to heed the calls for retirement and continues to toil dangerously in the bowels of the sport. Danny Williams, he of Mike Tyson fame and a man that has featured in fights with nearly every domestic rival of his era, just cannot stay away from the ring. It was risky him fighting 10 years ago when he seemed a completely shot fighter, now it’s beyond dangerous.

A problem with fighters who were once very good and turn into journeymen is that they’re not great at just surviving, like some seasoned journeymen. They think they still possess some of their juice from the past and are usually not versed in the art of survival. If they think they can compete or win they can expose themselves to more painful outcomes. Danny has acted this script out quite a few times with said results.

The lack of global regulation of the sport means there is no true accountability for unscrupulous governing bodies, promoters, and matchmakers to face. Therefore the farce of allowing Williams to continue in the sport professionally won’t be stopped anytime soon. So, I want to use this platform to speak to Danny about his choice to keep rolling the dice and endangering his health.

It’s been 18 years – almost to the day – since you challenged Vitali Klitschko for the WBC heavyweight title. It ultimately proved a step too far, but what an achievement it was for you to get in touching distance of realising your dream of becoming world heavyweight champion.

I can’t mention your fight with Klitschko and not highlight how you secured that title shot. You shocked the world by knocking out Mike Tyson. Mike might have been 38, but he remained a giant in our sport and for a short time at least, he was still very dangerous. But you, Daniel Peter Williams, did the unthinkable, by withstanding all that turbulence ‘Iron’ Mike’s fists put you through to claim a famous victory. As a fellow South Londoner, I beamed with pride.

It wouldn’t be the first time you achieved the unthinkable. Who can forget when you defied a dislocated right shoulder to knock out the late Mark Potter with a left uppercut? That was all the way back in October 2000? It was a display of bravery and perseverance that went beyond the call of duty and is still replayed on social media to this day. So, it should be. No one can say that you didn’t give the sport everything that you had.

I doubt that back then you would’ve thought you would be still trying this boxing thing in 2022, less than a year out from your 50th birthday. While rivals from your generation are nestled into retirement and have long transitioned back to lives as civilians you continue to try your hand at this sport, knowing that the risk to your health is increased exponentially at your age and on the back of a long and hard career. Boxing is a dangerous well to drink from. Vulnerabilities like age can be ruthlessly exploited.

I’m sure you remember Greg Page, the former WBA heavyweight champion from Louisville, coincidentally where you beat Tyson. Like so many of us who enter the professional game, he fought on long past his prime, and in 2001, at the age of 42 and 16 years removed from his short reign as a world champion he took to the ring against Dale Crow and ended up suffering a knockout defeat and irreparable brain damage.

It’s worth noting that the damage Page sustained could have been limited if there had been an ambulance on-site, a paramedic or even oxygen to administer to him. I only bring that up as I worry that the venues you appear at nowadays might be under-equipped to keep you safe. It’s hard for me to conceive that the commissions which continue to licence a 49-year-old man to fight are paying close attention to details and the wellbeing of their boxers. They don’t care about you.

Danny, only you know why you continue to come back and lose to men who wouldn’t have been suitable sparring partners for you once upon a time. Money might be a motivation, but I do wonder how much money promoters are willing to pay someone who is two decades on from his prime years, just to lose.

This sport can be a curse that’s hard to break. In other sports, when a man or woman hits the other side of their peak, the losses pile up and they eventually walk away able to embark on a new chapter. However, in boxing when it’s time to leave, you can only hope that you are blessed with most of your cognitive abilities and are in good enough condition to get on with the rest of your life. The threat of reaching the end in boxing looms over every fight because of the potential danger involved – no matter the stage of their career a fighter is at.

There was a time when you were the hot young prospect. Big, fast, and powerful. I was at the tail-end of my career when yours started to gain real momentum. Just after I retired your trainer at the time, my old mate, Jim McDonnell, excitedly told me he was training you and predicted that you would be world heavyweight champion.

He arranged for you and me to spar. I was impressed by your hand speed and natural ability. You reminded of a young Gary Mason. As amateurs Gary and I both boxed out of Wandsworth ABC, and there was no one like him. He was huge and farmyard strong yet threw combinations with incredible speed and frequency. I saw that in you. I knew after our session that Jim would either be on the money with his prediction or not far off.

I was also impressed with your humility. You praised the abilities I still had, joking that you hoped ‘I stay retired and never come back.’ We also laughed at the similarities we shared: our physical resemblance, our surname, our boxing attire being white shorts and robe with red trim. You joked that; you were ‘Sweet D II’.

We were on opposite sides of the fence in 2002 when Keith Long, who I managed, challenged you for your British and Commonwealth titles. You guys graced York Hall with a mini-classic. I thought Keith had you midway through, but again you showed heart and championship pedigree to win the later rounds and take the verdict.

Now you you’re operating at the dark end of the sport. Please be aware that the vultures who think it is congruous to sanction you to continue fighting and pad the records of their average prospects, clearly see your heart remains willing but your flesh is now very weak. If no one close to you can convince you that the time for your retirement is right now, then we must publicly condemn and bring scrutiny to the promoters and international bodies who keep shooing you into the ring through the backdoor. Before it’s too late.

You’re up to 87 fights now, which includes 32 defeats – 17 of them inside the distance. You’ve done some outstanding things in this sport, but Danny, please accept it’s over. It’s been over for years. Now I say to you, like you said to me, without the jest: “I hope you stay retired and never come back.”

*** In collaboration with Wayne Cyrus ***