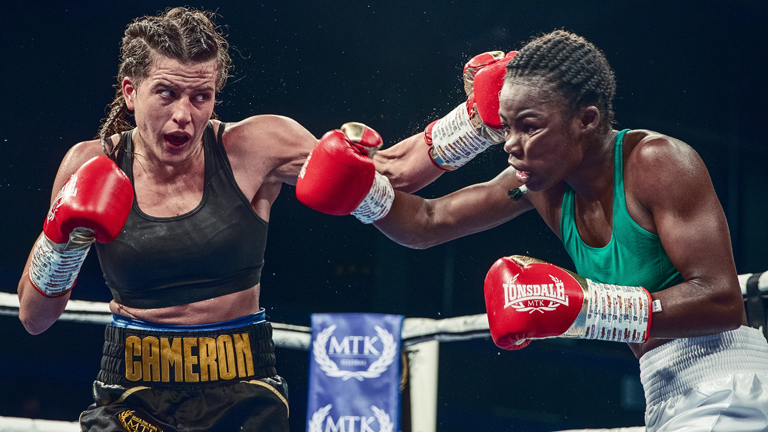 That is the four-word synopsis from Chantelle Cameron’s triumphant night at the Brentwood Centre, where she handed a comprehensive beating to Anisha Basheel in her WBC Silver lightweight title defence.

While the big fellas were jostling for position on the World Boxing Council’s heavyweight title path a few miles to the south west, Cameron was putting herself in the front of the queue for the great 135lbs champion Taylor by winning this final eliminator on MTK’s promotion.

It had the potential of being a banana-skin. While not in Cameron’s calibre in boxing terms, Basheel carries considerable power as those who witnessed her brutal stoppage of Sam Smith at York Hall last year will testify.

However, “The Massacre” would get nowhere near the undefeated Northampton boxer, who won 100-89 (from Christophe Fernandez and Daniel Van de Wiele) and 100-90 (Robin Dolpierre).

From the start, Cameron dominated her Malawi rival via her jab and razor-sharp two and three-punch combinations.

Setting a ferocious pace over the two-minute rounds, the Jamie Moore-trained lightweight was at her most intense in the one-sided middle sessions.

In fact, you wondered how many more shots Basheel could or should take. Her corner clearly know her best and, ultimately, they were vindicated as she stayed on her feet, giving a spirited account of herself late on.  John Latham refereed.

This South London scrap might not have thrilled the purists, but it kept the audience gripped throughout.

Day was on the front foot from the off, only to come up against a man on the move, though when Adolphe chose to engage, his shots carried greater authority.

At halfway, Adolphe looked well in contention but from the seventh Day upped the tempo with the tide very much with the unbeaten Bexley fighter. And when his Wimbledon opponent was docked a point for holding in the eighth, Shaquille spun in delight at the end of the round.

Louis was down twice in the ninth and while he claimed a slip for the first, there was no doubt about the right which tagged him in the dying seconds.

The last three minutes were just as one-sided with Day forcing Adolphe to touch down on the bell, though it was not counted as a knockdown. But it did not matter with Jeff Hinds scoring it 96-92.

The international 10-rounder which followed, won by Michael McKinson, was more a game of chess.

It was not easy, but the 25-year-old makes boxing look an art form. His cornermen’s T-shirts read “Michael McKinson is here” and they should have “but not to get hit” in brackets underneath.

He boxed with precision, in thought, movement and punch and while his shots never troubled Evgeny they certainly kept him firmly on top.

Pavko stepped up his effort a few rounds in and while he was busy and competitive, he was never able to build any sustained pressure.

McKinson finished with a flourish and looked a clear winner, though he did not seem convinced until the MC announced the unanimous verdict, all with different scores, from Howard Foster (97-93), Frank Michael Maass (98-92) and Manuel Palomo (96-94).

BN agreed with Herr Maass but some of the rounds were open to interpretation between Pavko’s aggression and McKinson’s artistry.  Steve Gray was the third man.

On the topic of artistry, Durham’s WBO world number four-ranked super-bantamTommy Ward made a winning debut for his new promoters when Chas Coakley scored his eight-rounder with Brayan Mairena 79-73.

The Spain-based Nicaraguan started and finished with ambition but rounds two to seven were Ward’s, using his speed, angles and deadly accuracy to score with both hands to the head and body.

Gifted Ward began the last with trademark movement but, showing variety, he then proved he could strand and trade.

Brighton’s Harlem Eubank seemed to be picking his moment in the six-round show-opener with Michael Carrero, only to leave it too late. Twice he put down his foe in the last but the Nicaraguan made it to the end, where he lost 60-53 on the card of Mr Hinds.

The same referee took charge of the other six-rounder, awarding Frank Arnold a 60-54 shut-out against Caerphilly’s Robbie Forster. The winless Welshman was not shy coming forward but the Hackney southpaw carried all the quality.

Quaise Khademi has built quite a following and you can see why as he bamboozled Joel Sanchez over four rounds.

The Afghan-born East Ham favourite took the skill of not getting hit to another level, making the Nicaraguan miss in spectacular fashion before snapping in his own quick shots.  Mr Coakley marked it 40-36.

Another popular Londoner won by the same tally (from Mr Hinds) as Jamie Whelan was accomplished with both gloves against game Hull featherweightLuke Fash.

One of the best bouts of the night came early in the piece as Josh Adewaleoutpointed Islington’s Jordan Grannum 39-37.

Neither had the power to trouble the other but plenty of scoring shots were landed with the Slough man having the edge.

Jack Martin had to wait until late to make his debut but it was worth the wait, the Essex boxer entering the paid ranks in fine style against the final member of the Nicaraguan quartet, Geiboord Omier. Mr Coakley saw it 40-36.

THE VERDICT: On the evidence of this almost-flawless performance, Chantelle Cameron could be a real danger to WBC champ Katie Taylor.