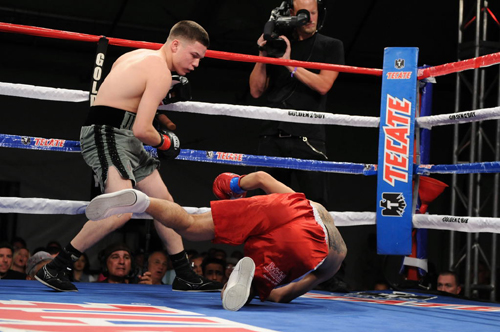 UNBEATEN super-bantamweight Julian Ramirez enjoyed a fine amateur career and now the 21-year-old southpaw is 12-0(7) as a pro. An exciting and talented fighter of whom big things are expected, level-headed Ramirez – promoted by Golden Boy – talks here about how his career has gone thus far:

Q: Have you an opponent set for your fight on November 13th?

Julian Ramirez: “My team have two or three guys and they will pick one. I’m not too concerned about who it will be, they will pick a good fighter. I can adapt to an opponent in the ring the night of the fight.”

Q: You are now 12-0(7) as a pro; is you career progressing as well as you could have hoped it would, are you on schedule?

J.R: “Yeah, it’s all going good. I like it. I would like to fight more often if I could. I’d fight once a month if they’d let me. As an amateur I fought all the time, so now, when I go a month without a fight, I get bored. But they’ve told me that after I get this fight out of the way, which is an eight-rounder, I will be moving up to ten-rounds next year. Hopefully I will get four or five fights in next year. But I would also like to get another fight in, in December of this year.”

Q: I read how trainer Joel Diaz had been approached to work with you, has anything come of that?

J.R: “No, nothing happened. I’m happy with my trainer, Rafael Sarabia, so I didn’t see the need to change. I’m not the type of guy to switch trainers after every fight. There is no reason for me to change.”

Q: Who has given you your toughest test thus far in your pro career?

J.R: “I’d probably say it was in my tenth fight, against Derrick Wilson. He was more experienced compared to the other guys I’d fought. He had beaten a lot of unbeaten fighters and he came ready. He didn’t hurt me, but he was very skilled and he had speed. That fight was probably my best performance, too. I showed I can box and I was able to show my skills.”

Q: Do you plan on staying at super-bantamweight, or will you look to move up next year?

Q: Who do you think is the best in the world right now at your weight class?

J.R: “Definitely Guillermo Rigondeaux. I think he’s the pound-for-pound number-one. Andre Ward’s not been active. Rigondeaux has not been than active himself, but I’d say he’s number-one. He has speed, power and he moves so well in the ring. He’s a also a lefty like me. He’s one of my favourite fighters to watch. I watch a lot of fighters on video and I learn a lot from him, a lot of tricks. I watch a lot of lefties, like Joe Calzaghe and Manny Pacquiao.”

Q: Rigondeaux has great defence as you know. Is that side of your game important to you?

J.R: “Oh yeah. When I move up to 10 and 12-rounds, I will need a tight defence. I actually have an underrated defence. Because I’m aggressive, people don’t know that I can fight off the ropes and that I do have a good defence. People have not seen that yet.”

Q: Have you been sparring any fighters of note recently, who the fans might be familiar with?

J.R: “Not really any names, no. Mostly I’ve been sparring with local kids, from here in L.A. I spar all types of styles, I’m not picky when it comes to sparring – I spar anyone from 120-pounds to 150. The only fighters I won’t spar are fighters I feel I may actually fight one day.”

Q: That’s interesting. Which fighters might they be, who is on your radar?

J.R: “I won’t spar Leo Santa Cruz any more, even though I used to spar him a lot as a kid. And I won’t spar Abner Mares or Diego De La Hoya. These fighters are all my competition. We all know each other and maybe Golden Boy will match us together one day. I hope we’ll all get matched together.”

Q: You sparred Scott Quigg a couple of years back when he came out to L.A. If he and Carl Frampton do fight, who wins?

J.R: “I hope that fight happens. It should happen before either of them loses. It would be good for both of them, a good payday and a big fight. I’d be pulling for Scott. I’ve seen Frampton and he’s nice, aggressive and strong. Scott would have to start fast, he can be quite a slow starter and he couldn’t afford that in that fight. But Scott is very strong himself, I just think he needs to be a little more aggressive. I think Scott would pull that fight out. It’s actually a perfect fight: Frampton is aggressive and Scott is a boxer. But I think they would really let it all out in the later rounds. It would be a really good fight.”

Q: Who are some of the other fighters you enjoy watching today?

J.R: “I really like Keith Thurman, I think he’s one of the best. I used to have a lot of respect for Danny Garcia, as he was fighting everybody. But now his value has really dropped. First he fought Rod Salka and now he seems to be avoiding certain fighters. I really like Rigondeaux as well. I’d say Rigondeaux and Thurman are my two favourites.”