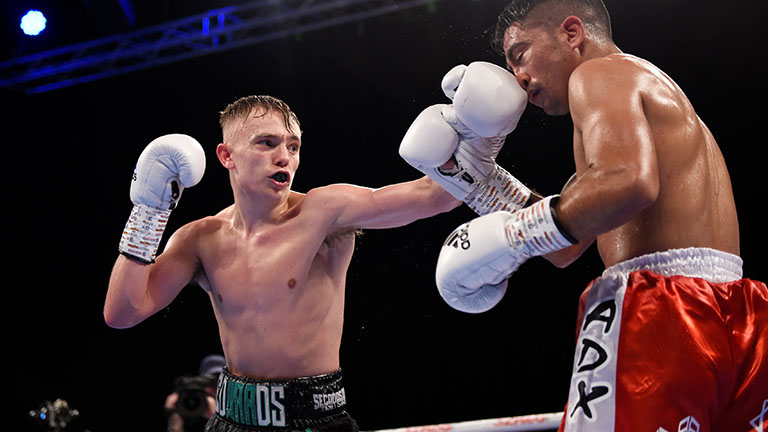 SHEFFIELD-based super-flyweight Sunny Edwards will look to continue his rich vein of form, as he takes on Hiram Gallardo for the vacant IBF International title at the O2 Arena in London on Saturday (July 13), on the undercard of Daniel Dubois and Nathan Gorman’s eagerly awaited clash for the British heavyweight crown.

Edwards moved to 11-0, picking up his fourth stoppage win in the process, as he breezed past Pedro Matos in eight rounds in April and move into the top five in the WBO’s rankings.

Now, he looks to move into a similar position with the IBF, as he plots the best route to a world title, although the 23-year-old is anticipating a tough night with Gallardo, who will have no intention of making up the numbers at the O2.

“It’s good to be back out so quickly and stay busy. Plus there is the added bonus of fighting for a new title which puts me high up in the rankings with the IBF, which means I have more options to play with. I haven’t officially decided to go down the IBF route yet, but a win on Saturday over Gallardo means that is there if I want to pursue it,” he said.

“Gallardo is tough, which is to be expected from all Mexican fighters, so I know what I’m up against. He’s never been stopped and has picked up some wins in the away corner before, so he’s not going to come here to roll over. It’s a good test of my credentials.”

Edwards also has ambitions to pick up wins over his domestic rivals and has openly spoken about picking up the British title, which was last held by his brother Charlie, who became the WBC flyweight champion against the odds last December.

“Showtime” was called by the British Boxing Board of Control to contest the vacant belt against Sheffield’s Tommy Frank, who currently holds the Commonwealth title. However the purse bids were cancelled despite the pair agreeing to meet on social media.

Edwards told Boxing News that he was the least surprised person of all when the fight with Frank failed to materialise, pointing to the rounds the two have shared in sparring over the years, as a possible motive for Frank to look elsewhere.

“Frank simply didn’t want to know. It was mandated by the Board, but they pulled out before the purse bids and weren’t even willing to negotiate. Then his trainer says he didn’t even know the bids were happening, which is total rubbish.

“I sparred him a few times and embarrassed him without even really getting out of first gear. He’s also spoken about going the IBF route, in fact his promoter Dennis Hobson went to their convention to try and make a fight for the title that I’m fighting for on Saturday. So, if he still wants it, he’ll have to come through me.

“According to his team though he offers more than I do. Well, I fight on BT Sport, whilst he fights on FreeSports, which despite the name will get barely any viewers. I know what he earned for a 10 round English title fight and believe me, I wouldn’t get out of bed for that money.

“He’s been fed lies and is being protected because he sells tickets. Clearly his team don’t have his best interests at heart as they keep turning down good money for the fight with me. Actions speak louder than words, so if he’s so good, come and prove you’re the better man, so we can move on.”

It is a source of frustration for Edwards, who isn’t afraid to call for his shot and step up to the plate for any fight. His wins over Ryan Farrag and Junior Granados demonstrated his talents and he is looking to keep momentum going, regardless of who is in the opposite corner.

“It shows how much people must rate me, if they’re not even prepared to fight for the British title, which is a title I hold in such high regard,” he added. “The way their teams are speaking about me, shows they must think I’m destined for world title honours and seeing what they are choosing over good money to fight me makes me think they don’t have the right ambition to be in boxing in the first place.”