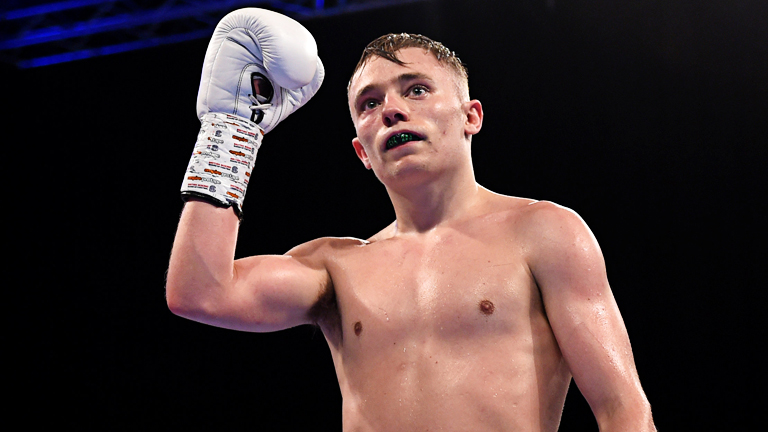 As he continues to climb up the world ratings, outspoken flyweight Sunny Edwards explains to John Dennen how his dark nights have shaped him

“SHE could have given birth, and I would have been sparring Louis Norman.” It has been a tumultuous time in the life of Sunny Edwards. Only 23 years old, and he looks even younger, he has become a father, risen in his professional career to headline TV shows and he hopes to advance far enough up the world rankings to challenge for a major title sooner rather than later.

Fatherhood has changed him too. “It’s zeroed me in a lot more, not to take everything for granted,” Sunny says. “That’s really what I’m doing it for.

“It definitely has changed me in a lot of ways, my mentality and my approach.

“Competing in the ring is my everything but at the end of the day it’s not everything. As long as I can give him [his son] the best life, no matter how I do it, that’s all that really is my priority.”

His child was born just 10 days before Edwards boxed Junior Granados last December, a fight that he’d only taken with limited notice (hence the importance of getting in whatever sparring rounds he could in the final couple of weeks ahead of time). His son was born only a few hours after that sparring session with Louis Norman. “Then the week after my Granados fight, Charlie [his older brother] won a world title,” Sunny said. “Introduced my son to my mum, who hasn’t been very well, so it was a great end to the year.

“When you have them dark nights, you look back at the good times. The highs aren’t half as sweet without the lows.”

The family went through a grim night more recently when older brother Charlie almost lost a world title fight to Julio Cesar Martinez. Under attack in the third round, he sank to a knee, only for the Mexican to reach down and hammer Charlie with a body blow while he was on the deck. At first the referee called it a knockout victory for the Mexican, then WBC president Mauricio Sulaiman made an extraordinary intervention from ringside to disqualify Martinez and reverse the result.

While Charlie has subsequently announced his plan to move up in weight, Sunny can make flyweight. If they are to be the Klitschkos of the lighter divisions, the heavyweight Ukrainian brothers had a knack for avenging one another’s defeats, perhaps then Sunny could exact a measure of retribution against Martinez. “Charlie’s a great fighter, a great boxer and he has some strengths that I don’t have and vice versa,” Sunny said. “I feel like my style would probably be a bit more suited.”

Though he notes, “I don’t think he was doing bad at all in those two rounds before that third round.”

The younger Edwards continued. “The heavier punches were from Martinez yes, but I think Charlie was landing more. Then obviously that big left hook hit him in a weird place and it knocked his equilibrium, a little bit on the back and then that kid was relentless. And who knows [what would have happened] if Charlie got up from when he got dropped? How many times have we seen people down early [and come back]? You’ve seen it time and time again. People can get hurt, people can come back.”

He points out that it was Charlie who took the knee. “All of those heavy shots that Charlie was getting caught with, none of them actually put Charlie down. [John Riel] Casimero I think is by far a stronger puncher than Martinez and Charlie went 10 rounds with him,” Sunny said. “Charlie took that rest [when he took a knee], it was just a barrage Charlie couldn’t keep off and that Mexican is not going to be able to throw punches like that for 12 rounds, it’s impossible.”

At first glance Sunny looks fragile. His frame is slight. He doesn’t have the face of a hardened brawler. But he is resilient. Against Granados, as early as the second round, he suffered an injury but he fought on with it. Quitting, he says, “wasn’t in my head”.

“But I feel people would have forgiven me if I’d come back after the end of that second round, I’d just been put down, I’d ruptured two ligaments in my ankle. If I’d went do you know what Grant [Smith, his trainer], let’s call it a day here. My leg was f*****. I went to Grant, ‘My leg’s f*****.’ He went, ‘No, you’ll be fine.’ Then I did another eight rounds. I couldn’t walk for the next three or four days, until I went to the physio and he literally made me go see a specialist within the next day,” Edwards revealed. “I know I’ve got good mental strength but actually proving it to myself is a whole other thing… If Granados had been a world level fighter, perhaps he would have beaten me. Who knows? But I would find out in the ring. It wouldn’t be me quitting and wondering what if.”

Even touching the canvas was a novel experience for him. “Charlie done me a couple of times when I was growing up,” he said. “No one apart from Granados and Charlie when I was a bit younger put me down in my whole life.”

He said of being dropped by his brother, “I think the oldest I was when he done me was when I was 16 or 17. I remember one time he done me with a body shot. I think I was being too cheeky.

“As I started going from the stage of being his little brother and not able to do anything to him to actually be able to be annoying and land a more solid shot, I think he just thought f*** it, put me in my place.”

While his brother has already won a world title, Sunny has no intention of being permanently outshone. “I don’t think it’s a case of I’m his younger brother and I’m always going to be in his shadow. I think if he dropped off a little bit and I picked up the slack and passed him then that would get recognised straightaway,” Sunny reflected. “Who knows, if I wasn’t on his tail, he might never have had the drive to become a world champion. You just don’t know. He, no matter what he does, he always wants to be one step ahead.

“I think with that drive and desire to win he’ll always want to be that one step ahead of me and that’s good.”

Sunny does have a particular style. He’s not a power puncher but is accurate with his shots and infuriatingly difficult to hit. He boxes with a cocky swagger that can be maddening for his opposition. It’s a style he’s honed from when he first stepped through the ropes. In his first spar, at the age of nine, he ended up crying. He’d realised very quickly that he didn’t like being hit. “When he came back I gave it to him,” he insists. “But I never liked being hit.”

“But I feel like years of not liking being hit helped tune my reactions, my elusiveness. Now I use it positively,” Sunny adds. “Now it’s turned into how am I going to make him miss that slight little bit? Some of the shots that I land are shots that you don’t really see anyone else throw. I’ll slip a jab on the right, throw a left hook through the middle, while turning the corner. It’s shots that not too many people have in their repertoire and that’s all come from seeing what works, feeling what works and knowing that I can’t get in the ring for 10, 12 rounds and just run around.”

Despite calling out domestic names, Edwards hadn’t managed to snare a British title (until this Saturday when he fights Marcel Braithwaite for the vacant British super-flyweight belt). So he has simply taken on a sequence of strong, aggressive Mexican and international opponents. None of them yet have managed to exploit flaws in his methods. “If it was up to me my last five fights wouldn’t have been against Mexicans, a Portuguese and what not, it would have been against all British fighters, cleared up all the domestic names before I looked to push on for world. But that’s not the boxing world we live in today unfortunately,” he said. “I don’t want to bypass anything, I just want to you keep pushing on and get to the heights I believe I deserve to be at. But you can only do that by proving yourself… You need to go through the right routes and creep up the rankings. I don’t think it’ll be too long before I get a mandatory position or voluntary title shot.”

There is no concealing the confidence Sunny has in himself, that he will indeed go all the way. “I’m genuinely quite a confident person anyway and I think more than anything I trust in the process. I know how much work I put in, I know how many rounds I do. How hard I train, how good I am,” he reflected. “If I’m not confident or start doubting myself that’s when I know things are going to start falling apart. I think mental strength is as much a thing as your physical strength. You can’t have one without the other. If you do, that’s when things start falling apart.”

“No matter who you’re chucking me in with I will genuinely believe that I’ll beat them. I genuinely believe that I’m that good. And I feel like you have to. The people that don’t are the ones that get in there and then, like a rabbit in the headlights, fail at that level. I’m just waiting for my opportunity,” he continued. “Just get myself in a good position and more than anything just keep learning. Every camp I’m learning, every camp I’m getting better. My lifestyle’s getting cleaner. I’m getting more focused, zeroed in.

“Whether it’s the next fight, whether it’s five fights or 10 fights that I eventually get my shot, I know I’m in a good enough position where I don’t need to be in a rush now. I don’t need to be trying to skip to the end. I’ve got a long career ahead of me. Ideally, I’d like these big fights whether they’re big domestic dust ups or world title fights sooner rather than later. The sooner you become a world champion, the sooner your money goes up, your reputation goes up. But then, at the same time, all the killers from around the world trying to chase after you.”

But Edwards is adamant that he will be ready.