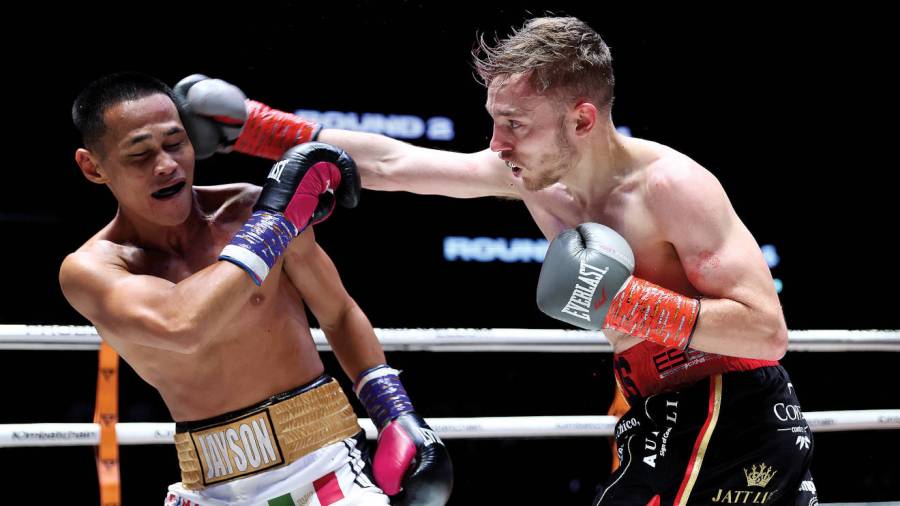 IT is a testament to Sunny Edwards’ adaptability and boxing brain that a mandatory defence against Jayson Mama in Dubai (Saturday, December 11) got easier and easier with each passing round. What started uncomfortably soon became manageable and eventually became so straightforward for Edwards the only discomfort was watching Mama still try.

A great performance, as opposed to a great fight, Edwards will be relieved to have brushed aside his mandatory challenger but could have done without the cut he picked up along his hairline in the second round. That soiled an otherwise smooth display and owed as much to Mama’s dabbling in the dark arts – headbutts, shoulders and elbows were commonplace – as it did the Filipino’s punch output.

Early on, especially, Mama proved a handful in every which way. At times, he belligerently charged towards Edwards with no fear of what might come back. He wanted to bully Edwards with long right hands, which he threw over and over again, though rarely had much success with them. Often, in fact, all these right hands achieved was to put Mama in a clinch, or instigate a messy exchange inside. It was there of course he bloodied Edwards in the second round and it was there he momentarily looked to be a threat.

Yet Edwards is nothing if not ring savvy and it didn’t take long for him to adjust to Mama’s single form of attack. Watching Mama raise his hands in celebration at the bell to end round two, the belt-holder perhaps decided, there and then, to bring an end to any illusion of his challenger having success.

From that point, the Croydon man took over, peppering Mama with jabs thrown from both the orthodox and southpaw stance, and spearing him with crosses whenever Mama got lazy with his feet. He would seamlessly switch styles, as is his custom, and grew more and more in confidence when it became apparent all Mama had to offer was a right hand and a big heart.

By the halfway mark, Edwards had found his rhythm and this rhythm – this pattern of movement – is one historically hard to shake for opponents. Lulled into it, they find that once they are moving the way Sunny Edwards wants them to move, it becomes increasingly difficult to stop.

That was again the case with Mama, who was not only beaten to the punch repeatedly, but was finding his own aggression and desperation used against him in the cruellest of ways. The more he tried, the more he fell short. The more he gritted his teeth and bit down on his gum shield, the easier he was for Edwards to hit.

To compound matters, Mama was putting everything into his shots whereas Edwards, utterly relaxed, mixed up the power and speed of his punches like an old pro. This difference showed in the seventh when Mama, enjoying little success, became excited after landing a right hand only to immediately be spun and countered by Edwards in the exchange. Too quick, too fluid, and far too good, Edwards was never going to fall for the traps of a man who was all headbutt and right hand. He seemed, by that stage, in control not only of his own actions but also those of his opponent, not far off a boxing ventriloquist.

That said, there is a tendency whenever watching a boxer as dominant as Edwards to overstate the victory or prematurely announce his arrival as a ‘star’. Rather than do that, we must instead remember that Mama, though his mandatory challenger, had beaten absolutely nobody of note coming into the fight and, while determined, was also painfully limited. Moreover, his style appeared almost designed by Edwards for him to look good.

Which, of course, Edwards did. He looked good early on, when under pressure, and he looked better and better once what was taking place started to resemble less of a fight and more of a lesson. By then Edwards had become so bored of exposing Mama’s limitations with the jab he would elect to exchange, albeit briefly, and would get the better of those moments, too, with Mama’s eighth-round Ali shuffle a demonstration of frustration rather than success.

In terms of approach, it was quite the contrast: one fighter was desperate for the knockout and the other content to cruise to a decision. The result, therefore, was pretty much inevitable: the desperation of the aggressor played into the hands of the boxer content to cruise, with their aggression and desperation counterintuitive in the end.

Mama, 16-1 (9), knew this when, in the 10th, Edwards followed a left cross with a right hook to either the side or back of Mama’s head and the challenger found himself on the canvas for the only time in the fight. He disputed the knockdown but it was counted nonetheless and it sucked from him his final bit of hope.

After that, Edwards, 17-0 (4), was willing to put himself in harm’s way just to have some fun, his boredom peaking in rounds 11 and 12. Matador-style, he postured, he dropped his hands, and he toyed with Mama, this bull without horns, until his dominance was ultimately confirmed by three ringside judges.

The Dubai undercard was meant to feature a WBO bantamweight title fight between John Riel Casimero and Paul Butler only for the fight to be cancelled due to Casimero being unable to make the weigh in. (Butler was then supposed to fight Ghana’s Joseph Agbeko for the interim title, yet that too was scrapped at the 11th hour.)