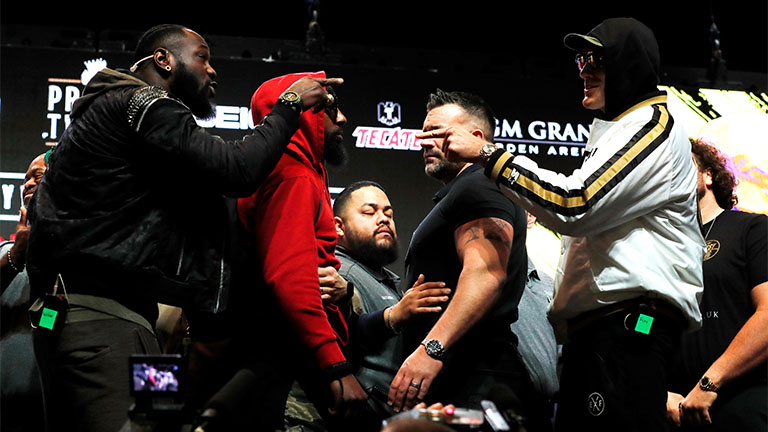 Sugar Ray Leonard, Hall of Famer
Wilder W 12: “I like Deontay Wilder to win, possibly by knockout, but, in truth, I don’t see either guy being knocked out. I think that Wilder not only has that powerful right hand, but that he has improved in his ability to set it up.

“On the other hand, I know that Tyson Fury has excellent boxing abilities and a tremendous chin from the way that he got up from the two knockdowns in their previous fight. In the end, I think that Wilder is always in shape and that he will use his speed and power to get the job done.”

Jamel Herring, WBO Junior Lightweight world champion
Fury by Majority Decision: “If Fury can box the same way he boxed in the first fight, without any scares, he can pull it off. On the flip side, it’s hard to pick against Wilder, as he always looks more impressive in rematches.”

Manny Pacquiao, WBA Welterweight World Champion
Wilder KO 10: “Never bet against a puncher, particularly one like Deontay Wilder. I look at Wilder like I do at a Mike Tyson, another puncher. I see Wilder winning this rematch with Tyson Fury by 10th-round knockout.”

Carl Frampton, former two-weight world champion
Fury W 12: “I think it’s a very difficult fight to call. Fury won the last one by a mile, but I think Wilder will be more aggressive this time, which may play into Fury’s hands. Wilder can win by KO at any moment, but put a gun to my head, and I’d say Fury on points.”

Thomas Hearns, Hall of Famer
Wilder W 12: “Deontay Wilder can box and win, but I think that his power will be the difference in defeating Tyson Fury. I believe that it will go to a decision again, but with Deontay Wilder winning it.”

Mikaela Mayer, undefeated super featherweight/2016 U.S. Olympian
Fury by decision: “I think Fury is the better boxer and smart enough to make the adjustments needed from the last fight. If he can avoid a bomb from the ‘The Bronze Bomber,’ I think he will win on the scorecards.”

Evander Holyfield, Hall of Famer
Wilder W 12: “I’m picking Deontay Wilder based on his confidence and the fact that he does all of the right things to remain in great shape, and that he’s committed to his craft.

“Wilder’s not just a big guy with a right hand, but he’s also become more calculated in his approach. That’s why I’m picking him to win this second fight against Tyson Fury.”

Michael Conlan, WBO No. 1 Featherweight Contender
Fury by decision: “He needs to be even more careful this time, but he looks like he’s put in some serious work and is ready finish what he started last time.”

Shawn Porter, former two-time world welterweight champion
Wilder KO: “I have not had this hard of a time picking a winner of a fight after dissecting every component in a very long time.  I honestly believe that this fight right here will seal both of their legacies.

“This is a 50-50 fight for several reasons. Deontay Wilder will be much more patient and freer from the anxiety he had trying to put on a big show in the first fight. Tyson Fury is now two years from depression, two fights from the retirement he came out of to fight Wilder.

“Fury has changed trainers in order to take the fight to Wilder and win by KO. Fury still has his speed and quickness, while Wilder is still powerful and more confident. It’s going to be a great fight.

“It’s razor thin until the end. I’m picking Wilder to win by KO, Fury by points, or Fury by KO. This is a 50-50 fight. I said on ‘Inside PBC Boxing’ a couple of weeks ago that Wilder wins by KO, but I’m picking the fans to win.”

Xander Zayas, 17-year-old welterweight prospect
Fury by decision: “He will outbox Wilder and make the necessary adjustments. It will essentially be a repeat of the first fight, only more convincing.”

Larry Holmes, Hall of Famer
Wilder KO 7-8: “Deontay Wilder will knock out Tyson Fury in the seventh or eighth round if he does what I know that he can do, which is stay on the outside, use his jab, throw that right hand over the jab.”

Adam Kownacki, undefeated heavyweight contender
Wilder KO 7: “I’m going with Deontay Wilder, and I think it’s going to be a knockout in round seven. I think it will be a rematch similar to the one with Luis Ortiz, whom he stopped in the 10th round the first time and in the seventh round the second time.

“Wilder will be patient, wait for his opening, and then, he will deliver. I think Wilder lands the big right hand and that, this time, Fury doesn’t get up.”

Robert Garcia, trainer of Mikey Garcia
Fury W 12: “I see Tyson Fury winning by a decision over Deontay Wilder. Unlike the first time, where he was knocked down twice, I believe that Fury will be fight more cautiously and that he’ll win a decision.”

Keith Thurman, former unified welterweight world champion
Wilder KO: “I’m going with Deontay Wilder, who is one of the most dangerous punchers in boxing history. There’s something about the first time that you step into the ring with an opponent, the entire, ‘I’ve never seen you; you’ve never seen me before.’

“But the fact is, Wilder now knows the movement, the speed and the tactics that Tyson Fury has, but, of course, Fury has the ability to dance, move around and change it up. But as long as Wilder can keep up with and move with him, I believe that he will do what he does best.

“I believe that Wilder can end the fight at any moment, aiming that right hand straight down the pipe, which he just about did in the last fight. It’s a tremendous event, I missed the first one, but I’ll be present at this next one and another great heavyweight rivalry. Team BombZquad.”

Ruben Guerrero, trainer of Robert Guerrero
Fury W 12: “Tyson Fury is much more focused going into this fight. He’s not partying like he was, and he didn’t go into camp out of shape. He’s gotten God-centered in his life now, so I’m picking Fury to win by decision over Deontay Wider.”

Chris Colbert, interim WBA Super Featherweight Champion
Wilder KO 8: “I feel like Tyson Fury is less confident for this fight, and I think that Deontay Wilder is going to win by knockout. I would like to see Fury put up a helluva fight, but I don’t think that will happen this time.

“Wilder has more hunger to come back and to do better in his rematches, like he did against Bermane Stiverne and Luis Ortiz. I don’t think Fury goes any further than eight rounds this time.”

Paulie Malignaggi, former two-division world champion
Fury W 12: “I feel like it’s going to be Tyson Fury on points, but it’s a fight between the two best fighters in the weight class.

“The onus is Deontay Wilder to make the adjustments, whereas if Fury fights the same fight, odds are, he’s probably going to get the decision.

“I do think that Fury has to be careful with getting careless in spots, but Wilder can’t just fight believing that he can land one shot and get him out of there.

“Fury is a great boxer who can probably be better at avoiding the shot the second time around because he knows what he’s dealing with.”

David Benavidez, undefeated WBC super-middleweight world champion
Wilder KO 11: “I think Deontay Wilder knocks out Tyson Fury in the 11th round, but I think it’s gonna be a close fight until that happens. Still, I think Wilder wins the fight.

“I think Tyson Fury will have a lot of success early, but that ultimately Wilder will catch him with that big right hand and knock him out.”

Andy Lee, former middleweight world champion and Fury’s trainer
Fury KO 2: “Tyson Fury can win this fight with Deontay Wilder in any way that he wants, whether by stoppage or knockout or accumulation of punishment on points.

“But the way that Fury’s looking in training, I will say that he wins by stoppage or knockout, and I’ll say he wins in round number two.

Anthony Dirrell, former two-time super middleweight champion
Wilder KO 8: “I am picking Deontay Wilder to win the rematch with Tyson Fury, and I think that it will happen in Round eight or nine.

“I just believe that Wilder will be better than he was in the last fight, and you can just look at his record in rematches against Bermane Stiverne and Luis Ortiz.”

Charles Martin, former world heavyweight champion
Wilder KO 8: “Deontay Wilder’s gonna win by knockout. I believe that Tyson Fury will be out-boxing Wilder for most of the rounds, but then, he will get stopped by that powerful right hand in the eighth.”

John Ryder, former WBA interim super middleweight champion
Fury KO: “I believe this fight will be a lot more explosive then the first. I believe Deontay Wilder will feel Tyson Fury can’t hurt him and will go for the KO very early and fade later in the fight. Tyson will get him out of there anywhere after the eighth round.”

Luis Ortiz, heavyweight contender
Wilder W 12: “Deontay Wilder will win a decision over Tyson Fury, who will be coming in respecting Wilder’s power and being wary of taking a shot based on all of the evidence of Wilder’s previous fights with me, and from their first fight.

“Looking at what Wilder was able to do with me during the championship rounds of our first fight and also much sooner than that in our second fight, he’s going to be worrying about taking a similar shot, otherwise, there’s a locomotive coming.”

Bermane Stiverne, former world heavyweight champion
Wilder KO: “I think Deontay Wilder will knock out Tyson Fury, it’s just a matter of when he lands the right hand or the left hook and finishes him off.

“Whether it’s the first or the last round, just like Fury was doing well in the first fight, I think it’s going to be a knockout for Wilder.”