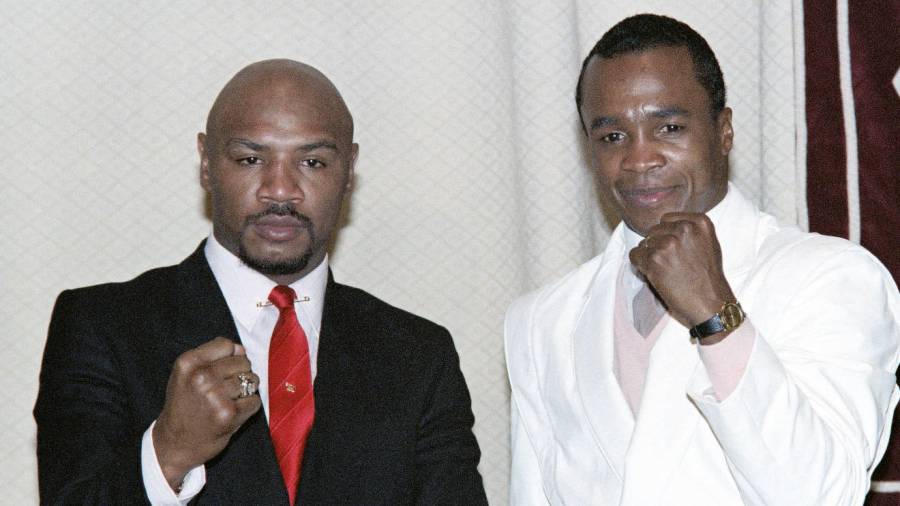 What would have happened if these famous 10 fights had got the rematch they deserved?

OBVIOUS rematches sometimes don’t happen, irrespective of the sense they make. Here are 10 that the public assumed would, yet they somehow drifted away.

10. JACK JOHNSON w pts 15 SAM LANGFORD
April 26, 1906 – Chelsea, MA
The decision was just and Johnson won without much of a fuss. But because so few viewed the bout, Langford’s manager, Joe Woodward, was able to concoct a tale that his man knocked Johnson down and was robbed. Woodward and Langford tried to appeal to Johnson’s pride to goad him into a rematch, being that the two fighters disliked each other. Two years later, Johnson would win the world heavyweight championship and never so much considered giving Langford a crack at the coveted crown.

Who needed the rematch more?
Clearly Langford did. Despite having a legendary career, he never did fight for a world heavyweight title.

Who would have won the rematch?
It would have been a case of bigger being better once again. Langford regularly beat heavyweights, but was no more than a middleweight. Johnson would have defeated him much the same way as before.

9. HARRY GREB w pts 15 MICKEY WALKER
July 2, 1925 – New York, NY
It was a barnburner of a fight, close, but virtually everyone agreed that Greb deserved to retain his world middleweight title. The next year, Greb would be dead as a result of a botched eye operation. In the interim, he had lost the title to Tiger Flowers, who in turn would lose it to Walker.

Who needed the rematch more?
Walker did, being that Greb legitimately defeated him at his best.

Who would have won the rematch?
According to Walker, they had one in the form of a chance meeting on the streets of New York, hours after the fight when an altercation ensued in which he sent Greb reeling from a powerful blow to the jaw. While this story was probably exaggerated, if not entirely fabricated, the bottom line is that Walker probably had slightly more in the tank going forward, boxing at a high level for an additional decade following the match. Walker by a very close decision would have been the most likely outcome if they had had an encore.

8. RUBIN CARTER w rsf 1 EMILE GRIFFITH
December 20, 1963 – Pittsburgh, PA
In the spring of 1964, when Emile Griffith accepted the 1963 Fighter of the Year award from the Boxing Writers Association of America, he strode up to the podium and said: “A funny thing happened to me on my way here tonight.” The crowd roared over Griffith’s sense of humour, knowing that the disastrous result against Carter had come right after it was announced he had won the award. Apparently, no one saw this result coming, least of all Griffith, who was caught cold in the opening round and stopped. Griffith, the world welterweight champion, was engaging powerful middleweight Carter in a non-title bout he was expected to win.

Who needed the rematch more?
Griffith did, to prove the result of their fight was an aberration more than anything else. However, it never came close to happening. Twenty-five years later, I asked Griffith’s manager, Gil Clancy, why they never had a rematch. His reply was basically dismissive, in saying that it was not important to them.

Who would have won the rematch?
Griffith would have. He was a great fighter, Carter a very good one. In over 100 career fights, Griffith was stopped only one other time, that because of leg cramps in the 14th round of his first bout against Carlos Monzon. That record of durability would strongly indicate that what had happened with Carter never would have repeated itself if they had fought afterwards.

7. ROBERTO DURAN w rsf 13 KEN BUCHANAN
June 26, 1972 – New York, NY
Duran was headed to a decision victory at Madison Square Garden, when the fight ended controversially at the end of the 13th round after they exchanged punches after the bell. Referee Johnny LoBianco did not see the blow to the groin which felled Buchanan. The defending world lightweight champion swooned, trying to get Duran disqualified, but it backfired when the referee interpreted it as he did not want to continue. The match was halted, and a legend was born. Buchanan desperately wanted a rematch against his fierce rival, but Duran’s manager, Carlos Eleta, avoided one, recognising that a motivated Buchanan posed a more serious threat than the other contenders Duran could face.

Who needed the rematch more?
Buchanan did, because his pride was deeply wounded by the defeat and he desperately wanted to even the score on both a professional and personal basis. On reflection, it can be argued that Duran’s legacy as a lightweight is slightly tarnished by not having fought Buchanan again.

Who would have won the rematch?
Buchanan was a brilliant boxer, vastly underrated, but Duran was one of the best pound for pound in history. Buchanan would have fought well, probably won a few rounds along the way, but Duran would have prevailed by a clear decision.

6. MUHAMMAD ALI w ko 8 GEORGE FOREMAN
October 30, 1974 – Kinshasa, Zaire
It was the way that Ali won which made it the defining moment of his career, shocking the world by defeating a supposedly unbeatable Foreman by spending a good part of the fight on the ropes.

Who needed the rematch more?
Foreman did, being that the Ali defeat shattered his image of invincibility. Ali would have probably granted him another fight at some point, but Foreman was slow to return to the ring after the loss, and the rematch slipped through the cracks.

Who would have won the rematch?
Based on their one contest, you got the feeling that Ali had Foreman’s number and would have prevailed again, even at the advanced stage of his career.

5. MARVIN HAGLER w rsf 3 THOMAS HEARNS
April 15, 1985 – Las Vegas, NV
One of the great fights of all time, even though it lasted less than three full rounds. Hagler outlasted Hearns in a battle for the ages.

Who needed the rematch more?
Hearns did. Despite his brave stand, the bottom line is that he came up short. The Hagler defeat, on top of the loss to Sugar Ray Leonard a few years before, had some whispering unfairly that he could not win ‘the big one’. Hearns would continue to box at a high level for years to come, but Hagler only had two more fights after their epic encounter, making talk of a rematch moot.

Who would have won the rematch?
Styles make fights and Hagler’s was all wrong for Hearns. Although Hearns would have used different tactics and boxed more in a second go-round, Hagler’s pressure would have grinded him into defeat by the mid to late rounds.

4. SUGAR RAY LEONARD w pts 12 MARVIN HAGLER
April 6, 1987 – Las Vegas, NV
More than 30 years later, this still rates as one of the most controversial decisions ever, but the split verdict in Leonard’s favour seems fair on reflection, even if the 118-110 score for him from judge Jo Jo Guerra was not. Hagler gave away several of the early rounds through inactivity, and it cost him dearly at the end.

Who needed the rematch more?
Hagler without question, but after a year went by and Leonard’s plans were unclear, Marvin quietly moved on and would never box again. Four years later, though, Leonard gently broached the topic with Hagler, who sensibly had no interest at that point.

Who would have won the rematch?
Hagler, thirsting for revenge, would presumably have started faster. However, riding the wave of confidence from their first fight, the pick here would have been Leonard to prevail by split decision once again.

3. JAMES ‘BUSTER’ DOUGLAS w ko 10 MIKE TYSON
February 11, 1990 – Tokyo, Japan
A 42-1 underdog, Douglas pulled off what many consider the greatest upset in boxing history by knocking out the supposedly untouchable Tyson. Douglas would lose the world heavyweight title to Evander Holyfield in his next fight, and would not box again for close to six years. Tyson was inactive for a good period of that time as well, having been incarcerated, but was active when Douglas returned. A rematch certainly could have been made had Tyson forced the issue, but for whatever reason, he was indifferent to facing Douglas again.

Who needed the rematch more?
Tyson did. Great fighters look to set the record straight by evening the score. Perhaps Tyson thought a rematch was inevitable, not expecting the window would close on it before it was made.

Who would have won the rematch?
The Tyson upset was Douglas’ last hurrah. He was never close to being that good again. Tyson by an early knockout would have been the most likely scenario.

2. PERNELL WHITAKER d pts 12 JULIO CESAR CHAVEZ
September 10, 1993 – San Antonio, TX
Outside of the two judges who had them level, it was hard to find anyone else who did not have Whitaker winning. The consensus at ringside was that Whitaker won by a 116-112 margin. Even Chavez’s Mexican fans thought their man had lost.

Who needed the rematch more?
It should have been Chavez who was stripped of his pound-for-pound bragging rights, but Whitaker’s people, after rightfully claiming they would treat the match as a victory, did the opposite and were the ones issuing challenges to do it again, giving the unjust verdict more validity than it deserved. Although he was gifted with the draw, Chavez remained in the driver’s seat as one of boxing’s premier attractions, and he used that clout to avoid another fight with Whitaker.

Who would have won the rematch?
Shortly after the draw, Chavez suffered his first official defeat when he was outpointed by Frankie Randall, a slick boxer like Whitaker. Pernell would have repeated his performance in a rematch with Chavez and beaten him, barring another bad decision.

1. FELIX TRINIDAD w pts 12 OSCAR DE LA HOYA
September 18, 1999 – Las Vegas, NV
The fight between the two then-unbeaten superstars failed to live up to the hype. It is most remembered for the tactics De La Hoya applied in the closing rounds, sitting on his lead, which enabled Trinidad to close strongly and win a controversial majority decision. A rematch was never seriously discussed, being that it was hard enough to get Trinidad’s promoter (Don King) and De La Hoya’s (Bob Arum) on the same page for the first fight, let alone trying to arrange another one.

Who needed the rematch more?
De La Hoya marginally did because he was heavily criticised for playing it safe late in the fight.

Who would have won the rematch?
It would have probably gone to the cards and been close again, but sentiment may have been with De La Hoya this time around, resulting in him being given the decision.