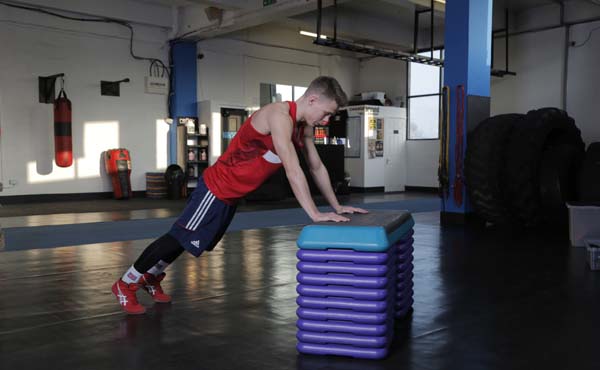 CLICK HERE FOR PART ONE OF STRENGTH AND CONDITIONING FOR BOXING

THIS week we move on to power. We work on power punches with weights or resistance, so that instead of wasting punches, the fighter is able to generate force at the right time. Many of these exercises are designed to replicate the movement patterns used in a fight.

You can be caught in tear-ups or pushed onto the backfoot, so you have to be ready to land that shot and generate power from any position. All this work leads to the timed circuit at the end which replicates the rounds in a boxing match.

NB: A super-set is when you do all the prescribed reps of one exercise, then go straight into completing all the reps of another exercise before resting.

Pause at bottom of squat for one-two seconds, then take all your momentum and drive up
with force.

Dig your hands into a high stack of steps, dip down with your chest, drive as high as possible, and finish standing up.

3 sets of 8 reps per arm. 45 seconds’ rest between super-sets

Dig heels into the floor during the squat, gather as much force from low, then drive the dumbbell high.

Start on knees, dip down until bum touches heels then push with hips to explode forward and upward.

Drive up forcefully, then follow through into the floor. Use your shoulders, chest, back and core.

This represents a punch like an uppercut so whip the ropes up then drive them down.

Set up in your boxing guard, keep your elbows in. When you throw the ball, drive vertically off your chest.

Go into a nice low squat, pick the ball up from the floor, then explode up as high as possible.

Get the ball tight to a wall, take a sharp half-step back and follow through with the ball as if punching.

The same as with two ropes, whipping up and down.

Drive up from low squat and squeeze glutes at top.

Keep everything locked out, maintain a straight back, squeeze your abs, turn into an explosive hook.