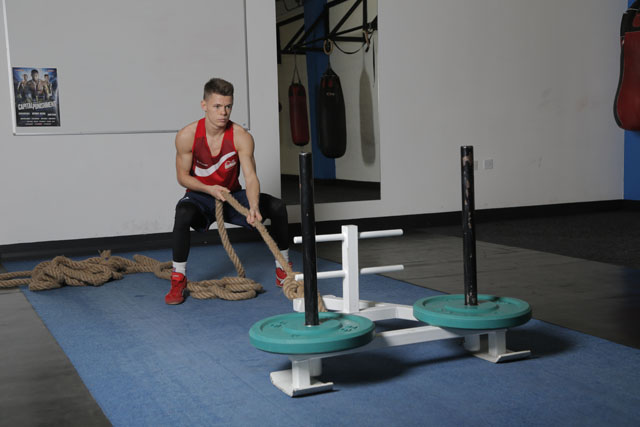 HAVING now built strength in part one, translated that to power in the next article and added crucial stamina and endurance, we move onto speed as this is a vital quality to possess. Strength multiplied by speed equals power – anyone can be strong as such, but without speed you won’t create that explosion. Its all about intensity and how quick you can react. This translates to a fight in several ways. You might be on the backfoot, taking a barrage of punches, but then you need to react to an opening nice and quick, it comes down to a split second. You might even use your speed to slip shots or get out of danger. All the following exercises replicate what you would do in the ring. For example, the wood chops are similar to hooks, the ladder drill is your movement to get out of the way and the prowler sprint is producing pure power when you are tired from the prowler pull.
As usual, former European medalist and current unbeaten pro Charlie Edwards demonstrates the moves.

1. Circuit: 3 exercises. 3 ‘rounds’ with 45 seconds’ rest between rounds
a) Alternating battle ropes x 20 seconds
Push down on the base of your feet, keep a slight bend in the knees, keep your hips back and drive your arms as much as possible.
b) Core wood chops x 20 seconds per side
Keep a solid base, with your weight distributed on your heels. The movement is a sharp, quick turn, turning your hips slightly, your obliques more, almost like a golf swing but don’t follow through as much.
c) Ladder drill x 4
Pump your arms and feet as quickly as you can through the ladder. Don’t hit the ladder or drag your feet. Take a slow jog back.

2. Circuit: 3 exercises. 3 ‘rounds’. No rest
a) Dumbbell punches x 20 seconds
Use light weights to get good speed. Punching at a slightly raised angle, as with straight shots your arms naturally fall. Return your hands to your chin.
b) Lateral jumps x 3
Bending your knees and exploding through your hips each time, jump over the hurdle to the front, then back to the middle, the left one then back, the right one then back, and go straight into the next exercise.
c) 15m sprint x 1
Push off into this as soon as you land from the last hurdle. Walk back to the start to the dumbbells to fill your lungs up. That’s your only ‘rest’.

3. Super-set: 2 exercises. 3 ‘rounds’. One-minute rest
a) Speed prowler pull x 20m
Keep a solid base, your body nice and straight and watch the track ahead, not the prowler. Keep your elbows tight to your body and alternate the rope between each hand, pulling it into your chest, like pulling a punch back.
b) Prowler sprint x 20m
Dig your toes into the ground and drive forward as quick as you can.

4. Reaction resistance drill: 2 x 3-minute ‘rounds’. 45 seconds’ rest
Attach a resistance band to a wall or anchored object then the other end to yourself. Spread out four different-coloured cones or objects two feet apart and at the end of your band’s length. Try and get a partner to shout out the colours or objects. Get on your toes like in a fight – ready to react quickly – and get to the target as quickly as you can then back to middle.