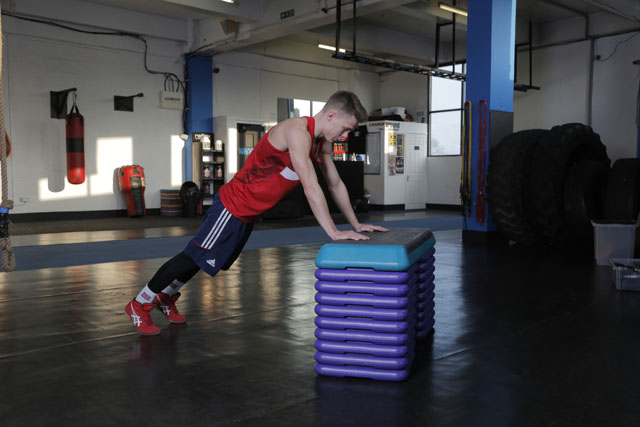 HAVING built strength in part one, and translated that to power in the next article, it is now time to focus on stamina and endurance. Not every fight will end in a round, so it is important to build the requisite stamina to last the distance. In this routine, there is no cutting corners. It is based around circuit training in order to replicate a fight, which is rarely fought at one pace – you might be on the backfoot then the front foot, jab then throw a combination; there are different phases of a round and of a fight. The bodyweight work in this workout is not as intense as the weighted work but it is all about moving nice and sharply to the next exercise, often with no rest, because in a fight you may be trying to move away but your opponent stays on you the whole time. This routine helps increase your vo2 max – the amount of air you are able to get into your lungs. It also helps you to focus on your breathing when you do get a rest. These are both vital qualities in terms of keeping your performance level up over a long contest. As usual, former European medalist and current unbeaten pro Charlie Edwards demonstrates the moves.

Circuit 1: 3 rounds of 3 minutes; one-minute rest between rounds
1. Chin-ups (6 reps)
Get full extension in the arms – no bend – drive elbows down as low as possible on the pull-up phase and get your chin over the bar or rings.
2. Hurdle jumps (4 reps)
Keep it short and sharp, just a quick bounce off the toes and go over the hurdles in turn.
3. Ladder drill (4 reps)
This is similar to employing lateral movement in a fight. You have one foot in the ladder and, as the spare foot moves in, you drive out with the original foot.
4. Press-up burpees (6 reps)
Keep nice and low, let your chest touch the floor then spring up nice and high for the burpee phase.
5. Shuttle runs (3 reps)
Keep the four markers 5m apart. Sprint from the first to the second and back, to the third and back and to the last and back.

Circuit 2: 3 sets; no rest between sets
1. Heavy bag work (one minute)
Make sure your work is intense and you keep up a sharp pace.
2. Box jumps (30 seconds)
Make it fast and at medium height – get on and off the box as quickly as possible.
3. Fast skip (30 seconds)
Again, as quick as you can and keep your knees high.

Battle rope drills: alternating slams; 4 minutes; 20 seconds’ work, 10 seconds’ rest
Change it up if you start getting tired, so go from alternating arms to a double-arm grip, as long as the ropes are being moved quickly. The 2:1 ratio is similar to working during a round of boxing.

The next stage will focus on exercises to build speed.