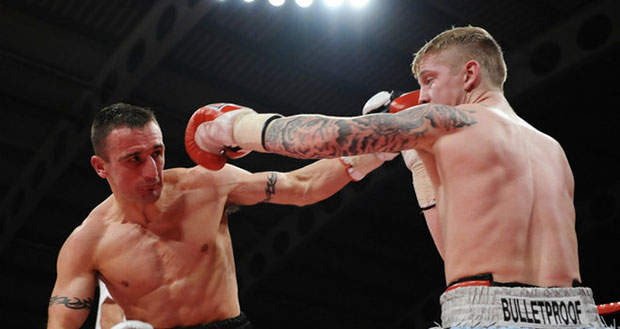 The Wallasey Express is hungrier than ever thanks to previous defeats

AFTER making a long-awaited return to the ring with two quick appearances in May and June, Wallasey’s Steve Williams once again finds himself in title class as he travels to Italy to face local favourite, Luca Giacon, for the vacant WBA Continental light-welterweight title this Saturday. Williams’ belt dream seemed unlikely when he participated in a routine four rounder less than two months ago but manager, Dave Coldwell, has landed the unlikely shot for his man and Williams’ trainer, Danny Kelly, is confident that his charge will break Italian hearts this weekend.

“This is a shot that the team wasn’t expecting for Stevie but it’s one that we expect him to grab with both hands,” revealed Kelly. “He’s proven before this fight that he’s more than capable of going the championship distance at a good pace and we believe that puts him in a good position to come away with the win on Saturday night. We’ve got no problem travelling for the shot and we’re grateful to Dave Coldwell for getting Stevie this chance. He’s looked great in the gym throughout the build-up and he’ll be returning to Merseyside with a new belt and a good ranking in the WBA.”

Williams’ journey to the Italian town of Casteggio is one that has provided more successes than disappointments but it’s the latter emotion that his given “The Wallasey Express” the added motivation to ensure that Saturday doesn’t end the same way previous title tilts against Lenny Daws and Darren Hamilton did as Williams fell short on both occasions. Kelly believes that the experience has made his man a better fighter and that will be evident once the first bell goes.

“Stevie is hungry for this because he knows what it feels like to miss out on great opportunities. Everything in this camp has gone really well and that includes everything from diet to sparring. He’s looking in the best shape I’ve ever seen him and that’s down to all the hard work he’s doing. He’s been working closely with Darren Campbell and Kevin Walker who’ve both made sure he’s done the weight correctly so we know we’ve taken care of every single minor detail. The hard work has been done so now he has to just put in one more big effort and the belt will be his.”