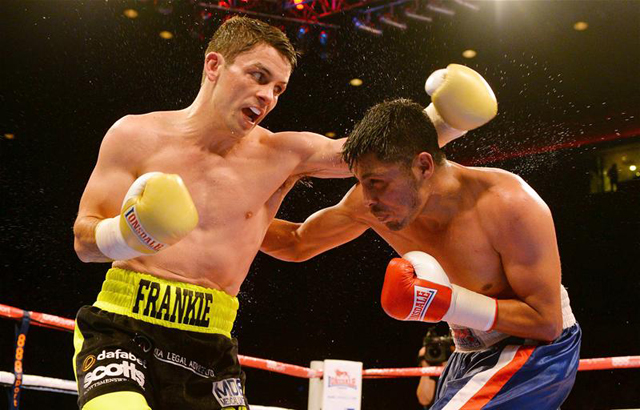 IT’S been a long time coming. Stephen Smith’s shot at a world title has been stalled by injury, delay but finally on Saturday he gets to take on IBF super-featherweight champion Joe Pedraza in Connecticut.

Stephen has seen his brothers Paul challenge Arthur Abraham, Callum win a final eliminator in style and Liam become the WBO super-welterweight champion. His trainer Joe Gallagher explained, “Everyone was touting him to be the first to win, he didn’t get the opportunities… It’s very hard when he’s getting, I won’t say disillusioned, but a little bit down because people around him have seen his brother get a world title opportunity, his younger brother Callum came through and is making great noise, getting great plaudits and in the mean time, it’s been ticking over, a couple of jobs in Sheffield and it seemed like the opportunity would never come but it has now and hopefully patience is a virtue and being in the gym he’s learned and been around the big fights now with [Scott] Quigg and with [Anthony] Crolla and Liam.”

Gallagher has a high opinion of the champion, Pedraza. “A southpaw, very good, hits the body well with either hand,” Joe said. “He love uppercuts, very effective with both hands. He’s a very good fighter.

Gallagher gave an insight into how Smith has been preparing. “It’s been a good training camp, he’s done everything I’ve asked for. We had to make sure we got his weight down, he’s in good shape,” the trainer said. “He’s had some fantastic sparring and bang up for this. He’s dieted right and we’re ready.

“We’ve had Tom Stalker over from Marbella. We’ve been using also Zelpha Barrett, also Alex Rutter, also Peter Cope, they’re the sparring partners we’ve been using. The fact of him [Pedraza] being a tall southpaw, him and Peter Cope were ideal. We had tall southpaws as well as a tall orthodox. They’ve watched Pedraza themselves and they’ve come and thrown shots that Pedraza throws. One out a round, for a minute it’ll be Stalker, the next minute Cope and keep changing. So if Pedraza wants to switch all the time we’ll be ready.”

“It’s still a huge opportunity for Stephen and it’s a massive fight for him,” Joe concluded. “He’s come back from his injuries and this is his opportunity now, it’s up to him now to go out now and win that belt.

“Stephen seems to have done everything the hard way in his career, he had to go to Wales to beat Gary Buckland, he had to Scotland to beat John Simpson.

“He’s on the road now… On the road again and hopefully he’ll win the world title.”