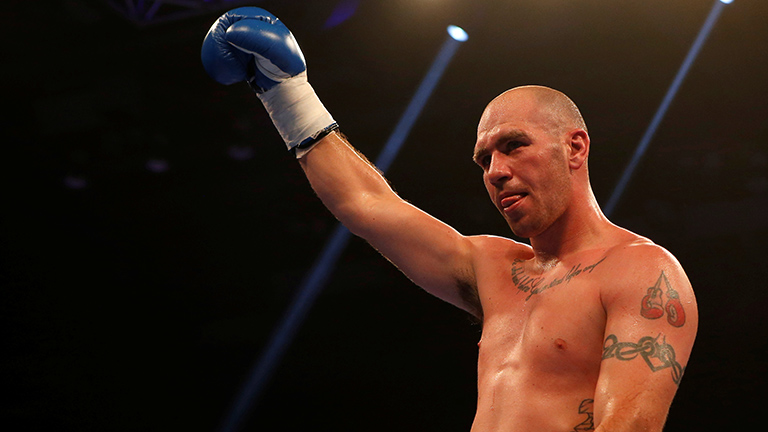 CRUISERWEIGHT Stephen Simmons returns to title action on Friday night when he faces Simon Barclay at the Meadowbank Sports Centre in Edinburgh on BoxNation and he is looking forward to capitalising on a surge of interest in the city.

Simmons was scheduled to challenge Matty Askin for the British title, however the fight fell through for a second time, this time due to an injury to the champion. Simmons is refusing to look past Friday though and is expecting Barclay to provide him with a good test in front of his home crowd.

The 33-year-old knows that a win will propel him into the top 15 with the IBF. He remains focused on a future shot at a world title, but admits that he would like to pick up the British title along the way, revealing he still hopes that the Askin fight happens.

Simmons told Boxing News: “This will be my first title fight as a pro in Edinburgh so it really does mean a lot to me and I can’t wait for Friday. Barclay obviously isn’t Askin, who I was expecting to fight, but he’s a clever fighter and I’ll have to use all my attributes to get by him, which of course, I’m very confident of doing so.

“Hopefully it will be third time lucky for me and Matty, who I have a lot of respect for. We both want the fight and know it is just business on the night, so I wish him well in his recovery. He exploited Craig Kennedy’s flaws last time out and looked good, although it was only a matter of time before someone exposed Kennedy, who was wide open for the right hand.

“I’m still focused on securing a world title fight, but it would be great to pick the British up as well. It’s also great to be fighting at the Meadowbank and seeing Edinburgh get the big billing for boxing. The Meadowbank hosted Alex Arthur’s famous fight with Michael Gomez, so it’ll be great to win a title in the same venue.”

Simmons is glad to be a part of the growing Scottish boxing scene, which has seen an increase in the amount of shows happening and more fighters coming through than there has been for a long time.

The Edinburgh man puts a lot of the recent success down to the backing that a lot of the Scottish talent get from the MTK, formerly the MGM, Group led by Matthew Macklin and Sam Kynoch, who Simmons insists have lived up to all his expectations since he joined forces with them.

He is also privileged to be a part of one of the best divisions currently in the sport and aims to one day to be a part of some big fights at cruiserweight in the next year, following the finale of the World Boxing Super Series, which has captured the imagination of boxing fans.

Simmons added: “Scottish boxing is thriving at the moment, not just in the pros but the amateurs too, where there are plenty of talented youngsters coming through. Josh Taylor is leading the way and he is someone who is genuinely special, which I saw early on when we went to the Commonwealth Games in Delhi back in 2010.

“I put a lot of that success down to MTK who have been fantastic for boxing in Scotland. They’ve put on multiple events and have brought more exposure with the likes of BoxNation covering them as well, so they have done exactly as they have promised.

“They’ve also been great to me and I’m confident that they could provide me the opportunities at world level. Cruiserweight is great to be a part of and you can see how good it is in the World Boxing Super Series, which is a great concept and putting the top guys on the map.

“There’s three of the champions in there with Oleksandr Usyk and Mairis Breidis fighting in the semi finals, which I expect Usyk to win comfortably on points, whilst I’m excited to see what Murat Gassiev brings to the competition as well, although you can’t write off Yunier Dorticos either after the quarter finals.

“I really do think that I will be knocking on the door soon and once it has all been figured out, I’ll get my chance to get involved too.”