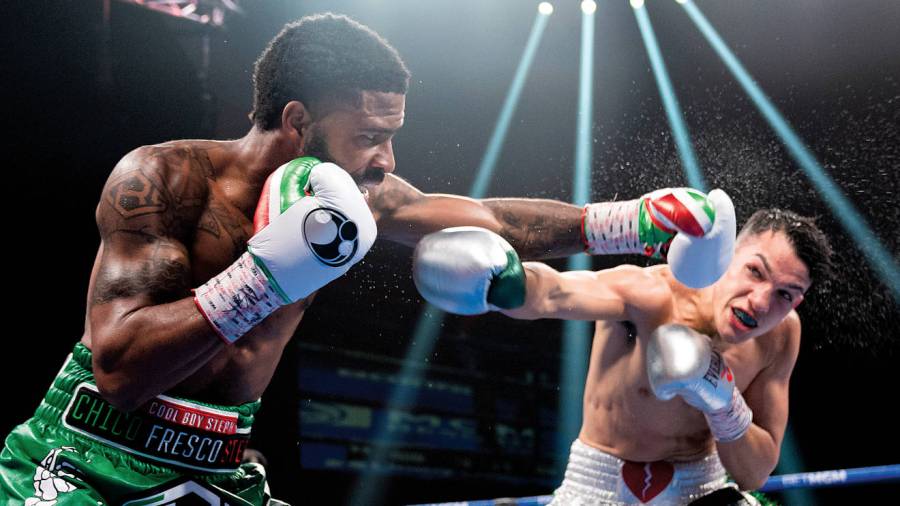 MINUTES after Stephen Fulton was awarded a 12-round majority decision over Brandon “The Heartbreaker” Figueroa in their super-bantamweight clash, the previously undefeated Texan was so distraught he interrupted Showtime broadcaster Jim Gray’s post fight interview with Fulton.

“Everybody knows who really won,” Figueroa yelled. To which Fulton cheekily replied, “Yes, me” which triggered another rant.

“I put the pressure on for the whole 12 rounds, landed the cleaner shots and hurt him,” Figueroa said. “I thought I only lost four rounds at the most.”

Fulton admitted it had been close, and offered Figueroa a rematch but Brandon had planned to move up to featherweight after the Fulton fight and was noncommittal about a return bout.

Practically every boxer who loses a close decision thinks he or she won. It’s just human nature and if Fulton had lost a close one he would undoubtedly have felt the same way. Even so Figueroa calling the result the “biggest robbery of the year” was considerably wide of the mark. It was instead a close, exhilarating fight between two unbeaten world-class fighters, just the sort of match boxing needs.

Throughout most of his pro career Fulton, 27, has been considered more of a versatile boxer than a puncher, but in his WBO belt-winning bout against Angelo Leo in January he decided to beat his opponent at his own game. Fulton successfully slugged his way to an impressive unanimous decision but mistakenly thought he could do likewise against the 24-year-old Figueroa. Not quite. Going forward Fulton might want to rethink his approach when he’s in with a puncher.

Figueroa’s fight plan was simple, force Fulton into the ropes and attack the body, which he did with considerable success, especially during the second half of the fight.

The Philadelphian depended on precise punching and ring smarts. There was spring in legs and he moved well enough, but didn’t seem to know how to spin out of a corner when under attack.

After a cautious opening round that Fulton won on all three official scorecards it was virtually nonstop give-and-take. There were no knockdowns, changes of fortune were frequent and who won certain rounds often depended on whether the judges favor precise punching or a relentless body attack.

Figueroa forced Fulton into the ropes in the second but most of his punches were negated by “Cool Boy Steph’s” tight defence. Fulton fought well off the ropes, landing a lead right and left hook to the head. He also scored in the third, landing a right uppercut followed by a left hook.

Fulton continued to score with precision if not power in the fourth, only to have Figueroa rebound in the fifth, punishing his adversary’s body and landing a sweet left-right combination to the head. It was much the same in the sixth. Fulton was having trouble handling Figueroa’s bully tactics. Then in the seventh the Philadelphian rallied to win the round on all three cards thanks to series of jolting uppercuts that collided with Figueroa’s chin.

The eighth was all Fulton until Figueroa broke through the final 30 seconds, pressuring his adversary into the ropes and chastising his body with enough punches to tilt the round in his favour.

In the ninth Fulton began to push Figueroa back with a body attack of his own. A late rally by Figueroa in 10th edged another round that could have gone either way. By then both fighters were dog-tired but still fighting hard, knowing full well victory was within their grasp.

Fulton was instructed to move and box in the 11th. The change came at a critical moment when both fighters had almost exhausted their resources and probably won Stephen the fight. Rather than diving yet again into a firefight he concentrated on avoiding the onrushing Figueroa and landing just enough to take the round. Fulton boxed even more conservatively in the 12th, evading Figueroa’s fading onslaught to win the round on two of the three judges’ scorecards. Instead of a blazing finish he took the less is more route to victory.

“It was an amazing experience,” said Fulton. “The judges made their decision and we can run it back. I was catching him in between every shot he was throwing. He was making it sloppy and rough. I was landing a lot of clean shots. He was throwing wild shots that the fans were enjoying, but he was hitting my arms a lot.”

Fulton says he won’t be satisfied with two alphabet belts (he took Figueroa’s WBC strap) and wants to become the super-bantamweight champion. That would likely mean going up against Uzbekistan dangerman Murodjon Akhmadaliev who holds the IBF and WBA titles. Whether such a match is feasible in the near future remains to be seen.

The only things Baez had going for him was guts and a looping overhand right that landed occasionally but nowhere near enough to offset Aleem’s overall domination. Oddly enough, Baez’s best round was 10th when he got the better of an exciting exchange.

The Verdict Fulton vs Akhmadaliev would be a terrific encounter.