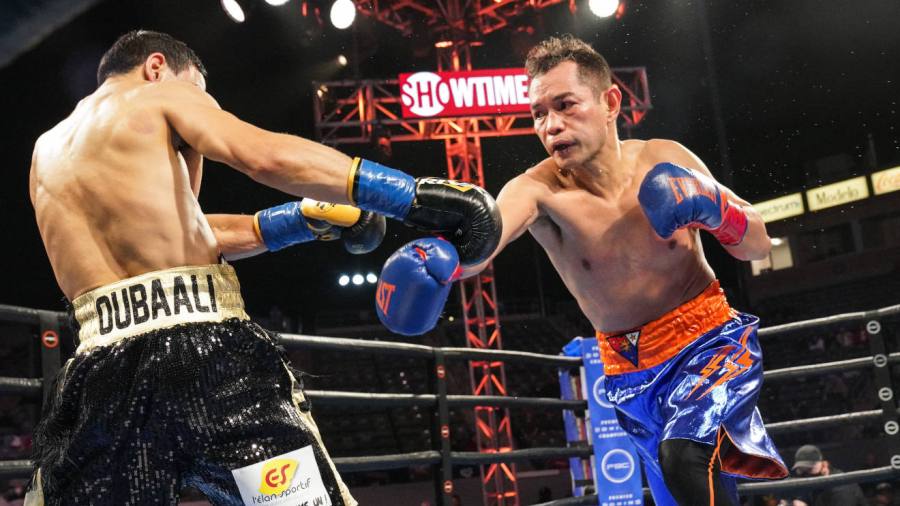 TEN years after relinquishing the WBC bantamweight title so he could campaign in a higher weight class, Nonito Donaire – at an astonishing 38 years old – regained his old belt when he upset the odds to crush Nordine Oubaali inside four rounds.

The remarkable feat also means the US-based Filipino has now held alphabet gongs in three different decades; his first one came down at flyweight in 2007 when he crushed IBF title-holder Vic Darchinyan in five rounds to announce his arrival.

It was a different world back then. Twitter was in its infancy and could boast only 50,000 active accounts compared to almost 200 million today. On Saturday night and Sunday morning, as Donaire’s latest achievement filtered rapidly through boxing’s myriad social media channels, a rare thing happened… universal agreement: Nonito, one of the most pleasant individuals in the industry, was declared a legend in the sport.

Though it’s fair to write off claims that he’s a ‘nine-time world champion’ as modern day boxing hyperbole, the veteran’s mind-boggling longevity, high quality of opposition and numerous comebacks are undisputable evidence that proves his greatness. In chronological order, Donaire beat Darchinyan, Moruti Mthalane, Hernan Marquez, Volodymyr Sydorenko, Fernando Montiel, Omar Narvaez, Wilfredo Vazquez Jnr, Jeffrey Mathebula, Toshiaki Nishioka, Jorge Arce, lost to Guillermo Rigondeaux, beat Darchinyan (again), Simpiwe Vetyeka, lost to Nicholas Walters, beat Zsolt Bedak, lost to Jessie Magdelano and Carl Frampton, beat Ryan Burnett and lost to Naoya Inoue before hammering Oubaali so ferociously. Also keep in mind that his future in the sport was called into question after each of the losses – particularly the stoppage to Walters – yet Donaire, by dropping back down in weight at an advanced age, continues to defy all logic by getting the very best out of what he has left.

What 38-year-old Donaire has – serious one-punch power and a brain that tells him exactly how to use it – is far too much for the likes of the previously unbeaten Oubaali, the pre-fight favourite. This was Donaire’s first outing since that unforgettable 2019 war with Inoue and though he fared so well against the “Monster” before losing on the cards, the rigours of that war alongside a long and winding career made his task inside Carson’s Dignity Health Sports Park appear far trickier than it proved to be.

Oubaali, a French southpaw who had won five of his last seven inside schedule, started brightly enough with his brisk jab and trailing right hand. Donaire was never flustered however, choosing only to throw when he was confident he would land. He scored to the body but his rival did enough to take the opening session.

Oubaali, a two-time Olympian with over 200 amateur bouts, was the busier in the second, too. But Donaire’s feet, as he deftly stepped back to avoid his rival’s power hand while plotting counters, were excellent. With 20 seconds left in the round, the veteran timed his rival’s forward motion perfectly and a straight right landed on the chin. Though only a rangefinder, Oubaali certainly got a taste of Donaire’s power.

The Frenchman,  failed to take heed of the warning shot. Instead, he grew careless. He upped the pressure on Donaire. In turn, the “Filipino Flash” dusted off his trusty left hook and waited for the opportune time to use it. Oubaali over-reached with his own power shot and Donaire, quite brilliantly, feinted with his right and ripped his honey punch into his opponent’s unguarded skull. Oubaali went down hard before regaining his balance and heading straight back into the danger zone. He did catch Donaire with a right hand but, on the bell, another left hook took Oubaali off his feet. Referee Jack Reiss ruled it a legal blow – it was thrown before the bell, he believed – and administered a count. Oubaali was seriously groggy as he went back to his corner.

Reiss waived the bout at 1-52 of the fourth. The increasingly menacing and confident Donaire had been countering for fun beforehand. Each time Oubaali threw, Donaire knew what to do. A right hand to the temple and conclusive left uppercut sent his opponent to the canvas. There would be no getting up this time.

“The king has returned,” Donaire declared. “Being at this age is not the question, it’s about my performance … about my ability to grow. I believe it matters not what your age is, but how mentally strong you are. What I learned from the [Naoya] Inoue fight is that I’m back. I can still compete at this level. The whole time I was not fighting, I was learning. I’m ready for the next one.”

“Tonight was something that I had to prove to the world that I’m back and I’m stronger than ever. He was a very tough guy. I think ultimately for me, there was a level of should I be more patient? Or should I go for it? Something I learned in the Inoue fight was to go for the kill. And that’s exactly what I did. I was patient, but I knew he was hurt enough that I could take him out,” he continued. “I came in here and I felt really good. Today I knew exactly what was going to happen. I knew exactly what I was going to do.”

Oubaali must have known too. He simply could not have been unaware of Donaire’s counter-punching prowess but, like so many fighters have discovered when opposing truly great boxers, he could do nothing to prevent Nonito doing what he does best.

There was another exhibition of how to counter-punch a southpaw on the undercard. Puerto Rico’s Subriel Matias notched the best win of his 18-fight career when Kazakhstan’s Batyrzhan Jukembayev, 30, failed to come out for the eighth round after an exciting scrap.

Jukembayev started well, accurately slinging his left at Matias. But the 29-year-old seemed to work his man out in the third round, stinging him with a right hand at the end of the session. Another right, followed by a left hook, decked Jukembayev in the fourth. The Kazak was nursing a cut on his head by the fifth but he refused to yield and got through with plenty of blows of his own.

The bout was fought at a high pace throughout, often in ring centre. Something had to give. Matias took over in the seventh and roared forward in the eighth, at times hitting Jukembayev at will. At the end of the round, referee Ray Corona was told of the retirement and Matias – now the IBF super-lightweight mandatory – was declared the winner.