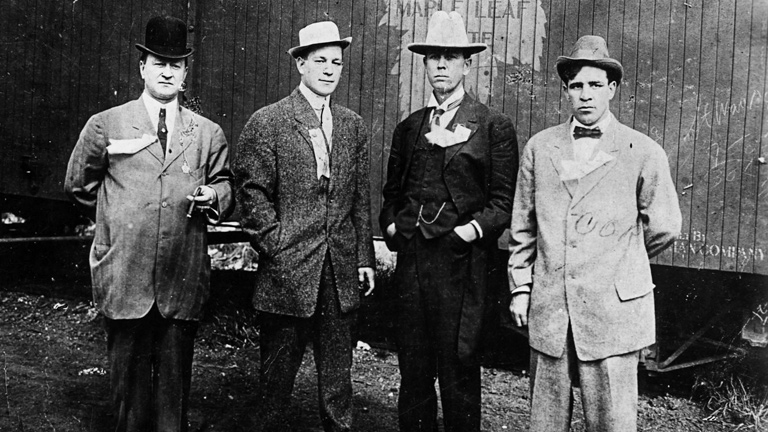 A WOMAN murdered! Her husband shot! For five days a Mexican murderer was at large. He was dangerous and would not hesitate to shoot. There was a thousand dollars reward for his capture – dead or alive. That sounds  like something out of the Wild and Wooly West. It was. And out there at Butte, Montana, was a young man, Stanley Ketchel, who had gone West in search of adventure and excitement, to find it, and after one of the most colourful careers in ring history, to add his name to the list of Fistiana’s immortals.

Stanley and Jack Stagel, the owner of the Cross Bar Ranch where Ketchel was working at the time, had just come out of the stables after attending to the horses when a rifle slug whizzed through the air and into Stagel’s shoulder.

Again the murderer had left his visiting card. Ketchel whipped out his gun and fired. Immediately there came a return fire from the Mexican. Stanley wasn’t hit but pretended he was and dropped flat on his back.

The Mexican wanted food, and his hunger may have made him a little incautious. He walked stealthily, merely casting a glance at Ketchel as he passed by.

Then out shot Stanley’s hand. He grabbed the wanted man by the ankle and brought him to the ground on his back. Ketchel was on him like a flash. He got him between his knees and started to strangle him, but wanting to take his man alive, gave the Mexican a clip on the jaw – then another.

The fugitive passed out unconcious, Stanley, “Steve” as he was known to his friends, got his thousand dollars reward.

His incredible life was an adventure. You can read more on this free-swinging, fast-living, big-punching legend here.

After training for five years to become champion he thought he was entitled to take things a little easier. He wanted to live his own life, and now that he had the money to do it, he did all the things he wanted to do, which was no life for a middleweight champion.

Like Jack Johnson he loved to drive a fast automobile. Johnson was killed in a motor accident; Stanley Ketchel who predicted he would die before he was thirty, took many chances with fate and got away with it.

It wasn’t on the cards that Stanley should meet his death that way; a murderer’s hand was destined to send him into eternity.

The nightlife of the city had it’s effect on Stanley’s health and he went to the ranch of Colonel RP Dickerson at Conway in Missouri to recuperate. He liked guns and usually carried one. He had a rifle too.

In the towns where he was to fight he could sometimes be seen in the streets dressed in cowboy clothes, just like the heroes of the West he used to read about when he was a boy.

A handsome young man, a maiden, the green-eyed monster, money and a rifle. The setting was there for a real life tragedy.

On October 15, 1910, Stanley was sitting on the ranch, with his back to the door having breakfast, his gun on his lap. One of the farm hands, Walter Dipley, evidently jealous and avaricious, crept silently near, with Stanley’s own rifle in his hand.

Shot in the back

He took careful aim and fired. The bullet went through Stanley’s left lung and he dropped from his chair to the ground. The murderer then took Stanley’s gun and smashed him on the head with it.

He tore the ring off Stanley’s finger, grabbed two one-thousand dollar bills from his pocket and made his escape.

Colonel Dickerson ordered a special train to take Ketchel to a hospital in Springfield, Missouri, but they arrived too late for Stanley’s life to be saved.

The murderer and his female accomplice were brought to justice. Both were sentenced to life imprisonment, but the woman was later released.

Just as little girls from his old school, all dressed in white, strew flowers before his coffin, expressing their deep love for their hero, so to say, sports writers lay their verbal bouquets to his memory.

Only a murderer’s bullet could stop “Steve”. He was just 24 years old.

There’ll never be another Stanley Ketchel.

* Ketchel is pictured second from left in our featured image. Dickerson is left, the notorious Emmet Dalton is second from right and Ketchel’s sparring partner, Joe Gorman, is far right.