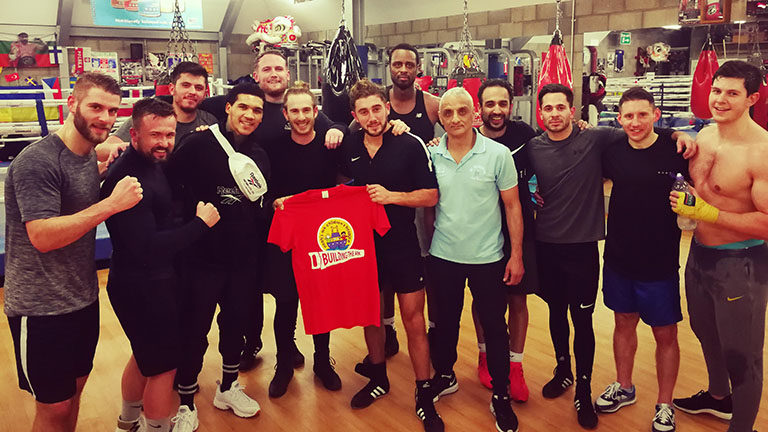 The St. Pancras boxing club plays a vital role for its community in north London

LEARNING to box at a good club goes far beyond drilling the jab or learning the essential skills of the sport. Gyms know that they offer that but something more as well. Alex Springer experienced that when, as an out of shape teenager, he went to the St. Pancras boxing club in north London. “It’s not just the discipline. I came here as a fat kid when I was 13 years old, no confidence, failing in my exams and this gave me confidence working with CJ [Hussein, the head coach], it’s lifted me up as a person and from that it made me want to spread that and give other kids the opportunity because I grew as a person from it,” Springer, now an entrepreneur, says. “Every person grows from walking through these doors.”

The club has a long history and has produced plenty of champions over the years. But for St. Pancras that’s not the only criterion they view for success. “From a young age, you come in here, you don’t even know it’s helping you,” Alex continued. “It’s giving them the confidence teaching them discipline. It teaches everyone that if you work hard, if you don’t cut corners, then you’re going to succeed and you’re going to win your fight. That’s a lesson in life that you can take on and that’s what CJ teaches.”

The primary role the club plays in its community is to be a safe haven for young people. “This is a kind of area where there’s a lot of knife crime,” Hussein says. “The club works with a lot of the local institutes round here, from schools to rehabilitation centres around the corner from here and the local police and the authorities. We do a lot of that in the afternoon.

“A great example we’ve brought in a very disruptive kid on the street. Not only has he got a job, he went to university. This is a kid who was in and out of prison from carrying weapons to guns and robbing crack dealers from South London, this kid now he’s working for Multiplex [a global construction company].”

Springer adds, “Through that [they’ve] now set up an apprenticeship scheme at Multiplex giving other kids who have come out of prison to get jobs. So that’s spreading, a snowball effect.”

They have begun to find pathways for the young people who box with them, like finding them apprenticeships, encouraging them to coach and even supporting their education where they can. “There’s got to be something after boxing,” CJ said. “We want to help the kids after. Get an education [or] become a boxing coach.”

CJ explained, “We try to help the kids as much as we can. A lot of companies now are very happy to come through to us because the kids we put through to them they’re very happy with. They’ve got discipline, timekeeping, because they need to be here on time and the work ethic absolutely. It’s like the army where you’re disciplined and you’ve got that routine. If you’ve got that routine, employers want you.”

The St. Pancras gym itself is a quality facility, with pristine equipment, boxing rings and room for multiple classes. It was renovated a few years back with a view to guaranteeing it in the long-term. “It was like an old warehouse and we extended the lease from Camden Council. We got planning permission to build the flats above and the gym sold off the flats and all the profits went into the gym and help build it and keep it running. We changed the bags, everything’s almost new, the facilities are fantastic and it’s a healthy, sustainable club and it’s run healthily and sustainably because of the development. It’s got an absolutely secure future,” Springer explained. “We do two events a year, that helps fundraising and there’s money in the bank, and it’s sustainable for the long term future. That’s the most important thing we want for this gym so it cannot shut down now ever. This gym has to be open. Kids rely on it, parents rely on it, Camden relies on it.”

Springer has also set up a strand for ‘white collar boxers,’ older professionals who box in a ‘HitClub’ project to raise money for charity. It’s been running for four years and has raised over £400,000 for good causes. “This year we teamed up with Noah’s Ark children’s hospice, which is a children’s hospice for terminally ill kids, from the ages of three upwards and supports their families, their brothers and sisters and obviously the kids. They’re building the most incredible facility,” Springer said. “So we raised £129,000 for them and a few other charities that were close to the boxers heart.”

The HitClub does provide some funds for St. Pancras but enriches the amateur programme. CJ gets the amateur boxers coaching the keep fitters. The ‘white collar’ boxers have also started to support the club themselves in different ways, one for instance is donating computers for the young people there to use, for another example two teachers will provide lessons on a voluntary basis. “If they want it, if they want any help with homework etc. they’ve got the help there,” Hussein says. “Giving these kids self-esteem and it also goes to some of these white collar fighters [too].”

Springer adds, “The club is here for the kids. It’s a safe haven, it’s a place where everyone feels safe. And we teach them motivation, discipline, work ethic, to then set them up for life. And that’s exactly how we look at it, the only way we look at it.”