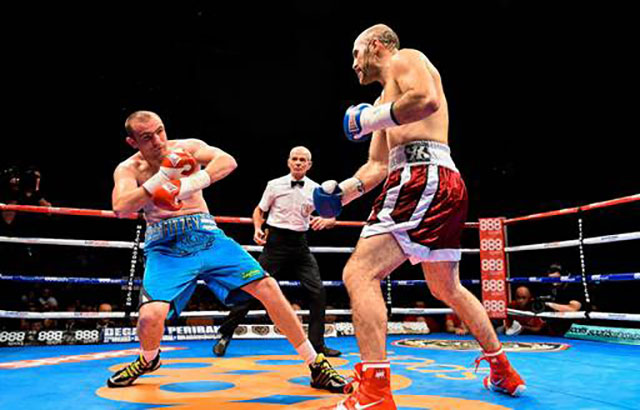 IRISH middleweight and former WBO International belt holder Gary “Spike” O’Sullivan, will enter The O2 Arena on December 12 riding a wave of five straight knockout victories. In a WBA regular middleweight title eliminator, O’Sullivan will exchange leather with the formidable Chris Eubank Jnr. Currently residing at 11th place in the WBA middleweight rankings, a victory would catapult O’Sullivan into a clash with the winner of Daniel Jacobs vs Peter Quillin. With twelve of O’Sullivans’s fifteen career knockouts coming in the first three rounds, Spike will look to be a Tthorn in Eubank’s side from the opening bell.

You headed stateside and sparred former WBC and WBO world champion Jermain Taylor. Do you plan to head back across the pond for this camp?

Not this time around. I plan to see this camp out in Dublin ahead of December 12.

What strengths and weaknesses do you feel Eubank Jnr brings to this fight and without giving much away, what will you look to exploit?

Eubank’s best asset is his name. I plan to use my experience and skill set to blow him away.

With the winner on December 12 in a position to challenge WBA regular champion Daniel Jacobs or Peter Quillin, how do you feel you stack up against Jacobs or Quillin?

We will see how Jacobs vs Quillin plays out. I am confident I will grasp my opportunity with both hands whether it is Jacobs or Quillin. I am capable taking the belt from either man.

Fellow Irishman and WBO middleweight champion, Andy Lee, is scheduled to box a former opponent of yours in Billy Joe Saunders. How do you see that fight playing out?

I see it playing out as a cagey affair. But I think Saunders will do enough to take the victory on points.