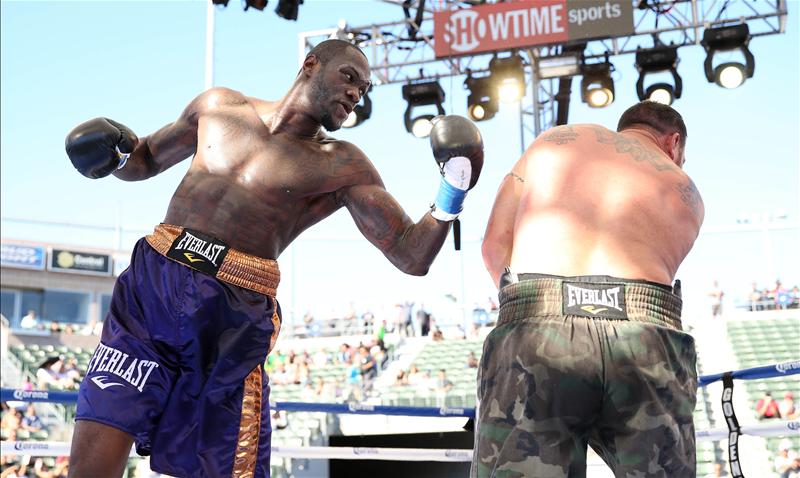 ISAAC CHAMBERLAIN may not have made his professional debut yet but he’s already experienced training at the top level, joining Deontay Wilder’s camp as a sparring partner. Wilder challenges Bermane Stiverne for the WBC heavyweight title on Saturday (January 17) in Las Vegas.

Chamberlain has little doubt that Wilder will be successful. “He should win because of the way he’s been performing. He came into camp really fit. He came in really sharp, really fit. He came in ready. You know when someone just acts different, he’s not the same Deontay I saw earlier on last year. He’s different. He’s like an animal. He’s a lot bigger as well. It’s different when you step in the ring with him rather than just see him from outside. He’s like a flipping animal, man. You’ve got to be sharp with him,” Isaac told Boxing News. “You’ve got to have your game face on because you can see it in his eyes and his face when you’re sparring with him, this guy’s trying to take you out. It was great.

“He’s the real deal. I saw him knockout so many guys in the gym.”

Their routine was punishing. “For two weeks we spar Monday, Tuesday, we rest on Wednesday, we spar on Thursday, Friday, Saturday, rest on Sunday. We just kept going like that,” Chamberlain, a cruiserweight, continued. “He’s smart… He had a lot of trouble with my handspeed. They brought me in for the handspeed. I think he underestimated me the first time we sparred because I started catching him with a whole lot of shots.

“I could tell they studied me because the second day I couldn’t get near him at all. I couldn’t get near him. I tried and I tried. They definitely, definitely studied me the second time. I started getting frustrated so I started lunging in with my punches. He set me up, he blinded me with the jab – he stuck his palm in my face and when I lunged in he got me with this uppercut. I was thinking, ‘Oh s***.’ I didn’t drop or anything but I swear I felt it, man. It was like, ‘Woah.’ It was really good.

“I loved the experience. We used to train, we used to go out to eat together and stuff. There was a lot of jokes and stuff as well. But the camp was a serious, serious camp. You have to be on top of your game all the time. I was preparing for January 31 as well.”

Chamberlain makes his professional debut on January 31 at the O2 in London. “When you get given an opportunity like this, you grab it with both hands,” Isaac said. “I really want this… I don’t want anyone to ever outwork me. I’m going to work as hard as I can to be the best that I can. No one wants it badder than me.”

Download the heavyweight special issue of BOXING NEWS available now on our app via iTunes, Google Play and www.pocketmags.co.uk