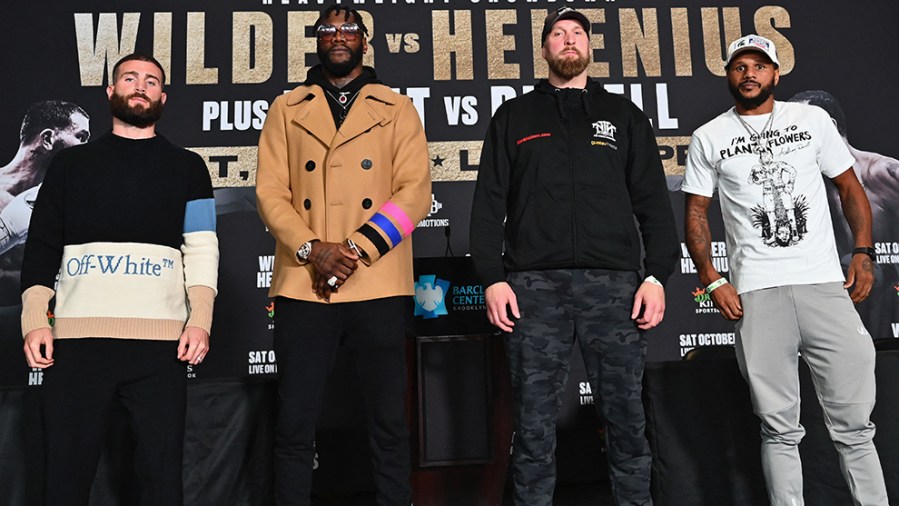 After two punishing losses to Fury, the Bronze Bomber is looking to impress against Helenius atop a solid card, writes Declan Taylor

A YEAR and a week has passed since Deontay Wilder last threw a punch in a professional boxing ring. The truth is, he has been sorely missed.

That night he was stopped in the 11th round by Tyson Fury at the T-Mobile Arena which took his record against the Gypsy King to 0-2-1. But he emerged from this one with the most credit of the three.

He had been dropped in the third round and then rallied to floor Fury twice in the fourth of this breathless heavyweight classic. But the Englishman re-established control and finally ended Wilder’s inhuman resistance with 1-10 left in the penultimate round.

It was his second consecutive inside-distance defeat at the hands of Fury and, as a wealthy man who had achieved far beyond what he had initially set out to do, it was suggested that Wilder, now 36, would walk away from the sport.

However, at the unveiling of a statue of himself in his hometown of Tuscaloosa, Alabama – a place where American football rules supreme – back in May, Wilder declared that his boxing journey was not yet over. This weekend, the Bronze Bomber flies again.

Robert Helenius is the opponent this weekend, and it seems like a good pick. The “Nordic Nightmare” is no mug, can hold a good shot and may cause Wilder some problems if he can stay on his feet for a few rounds. That’s a big ask.

And while he may have tumbled down heavyweight rankings, there is still nobody in the division who can do it quite like Wilder. Oleksandr Usyk has emerged as the No.1 after back-to-back wins over Anthony Joshua; Tyson Fury crushed Dillian Whyte, retired, then unretired; Joshua fared better against Usyk but still lost the rematch, nearly made the Fury fight and then didn’t; Joe Joyce did Joe Joyce things against Joseph Parker; Andy Ruiz dropped Luis Ortiz three times in a UD victory.

But even after more than a year away, none of those men can deliver the excitement that Wilder can on fight night. It’s good to have him back, if not for too much longer.

“I only want to put in three more years,” he said during an interview with Premier Boxing Champions. “By the end of 40, we don’t have to be guessing about Deontay Wilder. We don’t have to assume. You hear it from the horse’s mouth now.

“I only wanna give it three more years, about till the end of 40, turning 41. And then I wanna be done with it. I wanna pursue other things that I have set for myself and I wanna enjoy the rest of my life with my children, and build, build, build this generational wealth.”

At 238lbs, it was a career-heavy Wilder that faced Fury last October. In fact, before facing Fury, the Alabama man had never broken 230 – and for the first fight against him, he was way down at 212 1/2lbs.

Ahead of this clash, he said: “I felt a little sluggish, a little heavy. You’ve got to understand, I’ve never been 240 ever in my life before. But it was an experiment that I wanted to try and we did what we had to do to get the weight put on there.

“It’s an experience up in the history books for me, the only way to become wise is to apply knowledge to life. And we’ve gained a lot of knowledge from that and now we know what to do leaning forward.

That may spell trouble for Helenius with a light, fast Wilder desperate to show that he is still a major player at the weight. Helenius’ last outing came on the undercard of Fury-Wilder III so he is also lacking in momentum. If he makes it to the second half of the fight it would be an achievement.

In fact, it is a night of comebacks at the Barclays Center with Caleb Plant also in action following an 11-month hiatus. Like Wilder, the 30-year-old’s last fight was an 11th-round stoppage defeat, only for him it was at the hands of Saul ‘Canelo’ Alvarez. He takes on Anthony Dirrell, whose last action came on the undercard that night – a stunning one-punch stoppage of Marcos Hernandez in the fourth round.

Canelo was the first defeat of Plant’s career, who was 21-0 before that night at the MGM Grand, so it will be interesting to see how he manages entering a fight off the back of a loss. And Dirrell, now 37, has been there, seen it and done it at this level. If Plant was hoping for an easy one back, he hasn’t got it. However, if he is the same fighter he was against Canelo, this looks like a Plant points win waiting to happen.

Elsewhere Gary Antonio Russell is also boxing for the first time since November as he takes on Emmanuel Rodriguez in a rerun of their first fight, which lasted just 16 seconds in August of last year. That night, the heads of southpaw Russell and orthodox Rodriguez collided early on and it was ruled a no decision when Rodriguez stayed down on the canvas. Assuming there are no headbutts this time, Russell should be slick enough to win here on points.

Wilder and Helenius are not the only heavyweights in action on the card with highly rated and still undefeated Frank Sanchez boxing for the first time since he beat Christian Hammer in January. The Cuban, 30, takes on 25-3 Carlos Negron and will be hoping to make an impression after two consecutive points wins. Negron, whose three defeats have all come inside the distance, will do well to last 10 here against Sanchez, who is moving closer and closer to the heavyweight top 10 with every victory.

Earlier, 24-year-old rising star Michel Rivera will look to continue his march towards the business end of the lightweight division when he takes on 14-1 Californian Jerry Perez over 10. Rivera, known as the ‘La Zarza Ali’ is 23-0 and has been tipped for big things since he left his native Dominican Republic in order to campaign in America back in 2019.

Verdict: We have missed Wilder, but what has he got left?