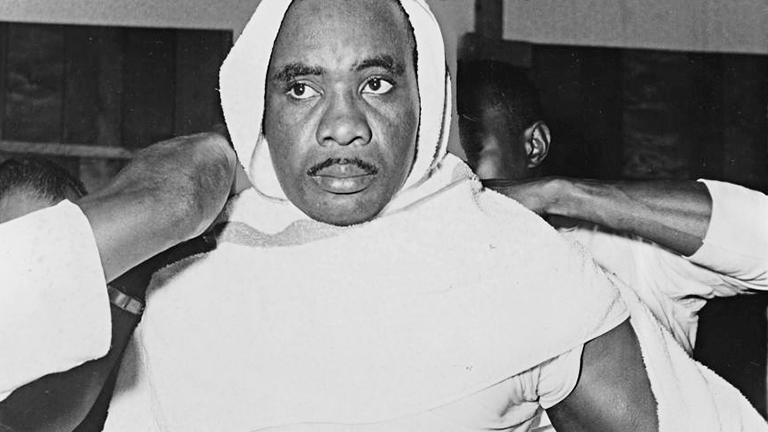 Before Sonny Liston fought Floyd Patterson, we gave readers this intimate look at Sonny on September 21, 1962…

AFTER his seconds had worked over him and sponged him down with cold water, Albert Westphal began to feel more like his old self again. Climbing back on his feet, he crossed the Philadelphia ring on still-shaky legs to where his conqueror stood.

“Why are you so unfriendly?” he asked. “I don’t want to be your enemy. Why do you look so mean?”

Sonny Liston was even more tongue-tied than usual. He slipped a huge arm around the German’s shoulders as though to comfort him. What the hell, they were fighters weren’t they?

Weren’t fighters supposed to be mean? Don’t think about being nice, just think about knocking the other guy out.

To him, the giant Negro heavyweight who fights Floyd Patterson next week for the World Heavyweight Championship, fighting is a serious business, a one he likes, but a business none-the-less.

Sonny will tell you that the only time he saw something funny in the fight game, it cost him a fight.

“I was fighting Marty Marshall and I knocked him down. When he got up, he ran at me barking like a dog. He was going woof-woof-woof, and I couldn’t help laughing. While I was laughing he belted me a good one and broke my jaw”

Sonny fought the last six rounds with his mouth hanging open and he finally cornered Marshall in the dying seconds of the last round. A murderous left hook ripped into the belly and lifted the veteran in the ropes.

Marty took one look at Sonny’s face and stepped right through the ropes and onto the ring apron! The referee started the count but the bell ended the fight and Marshall had the decision.

That is Sonny Liston’s sole defeat in 34 professional fights, and he has racked up 23 knockouts over the best heavyweights around. Against his better judgement, Marty Marshall went back in there with Sonny and lived to regret it.

Liston stopped him in six, then pounded out a decision over the Detroit fighter.

One of twenty-five kids born to a field hand in a rickety backwoods shack near Pine Bluff, Arkansas, Charles Liston had no time for schooling. His days were spent working in the fields. When his parents split up, he ran away to St. Louis to join his mother.

City life was so strange to the overgrown boy from the backwoods. At thirteen, he enrolled in the first grade at school where the other kids laughed at him and his illiterate mannerisms. A year later he quit school.

Liston ran wild in the street with a tough bunch and one night they pulled an armed robbery at a hash joint on the East Side. One of the customers recognised him and before he could spend his share of the 37 dollars loot, the cops picked him up.

It was not Liston’s first brush with the law, and they threw the book at him. He was sentenced to three five-year terms, to run concurrently, at the Missouri State Penitentiary in Jefferson City.

To kill the monotony, the big Negro took to fooling around in the prison gym. Soon the word got around that the Liston kid was the biggest thing on two feet. Father Alois Stevens, the Roman Catholic chaplain, was one of those who heard the word.

Father Stevens began to encourage the young convict in his boxing, and so it came that one day, the priest paid a visit to the sports editor of the St. Louis Globe-Democrat, Bob Burns.

Burnes sent a trainer he knew, Monroe Harrison, to see what the kid looked like.

Harrison liked what he saw and application was made for Liston to be paroled. This was granted and, after serving just over two years of his sentence, Charles Liston was released in the care of Father Stevens, Burnes, Harrison and a Negro newspaperman, Frank Mitchell.

He smashed aside all amateur competition to win the Golden Gloves title, and in 1953, became a professional fighter. In 15 bouts, he lost only to Marshall, and scored seven knockouts.

At the weigh-in for his first fight, one of his handlers was giving him instructions. The kid Liston was to fight started repeating everything the guy said. “That’s right, Sonny,” he would say. “Sonny boy, you hear me?”

The promoter picked up the nickname and he was announced as Sonny Liston when he climbed into the ring.

His new connections got the right fights for their new meal-ticket. He knocked over big names like Mike DeJohn, Nino Valdes, Cleveland Williams, Roy Harris and Zora Folley and outpointed Eddie Machen.

Sonny Liston was the Number One contender to heavyweight champ Floyd Patterson. But he had to wait two years before he got his big chance. He had to rid himself of the shadowy figures lurking behind the scenes, and get himself a new manager.

Sonny paid seventy thousand dollars to Barone for his contract, and hired George Katz as his new manager. Katz, an honest fellow, has since been supplanted by Jack Nilon, an Irish-American dollar millionaire, but George is still in for ten per cent.

“I like the guy,” says Nilon of Sonny. “He’s a big kid, a big overgrown kid. Hasn’t he been persecuted enough?”

This is also the opinion of people close to Sonny, not an easy man to know. Morton Witkin, His attorney, says. “It’s hardly possible to dislike Sonny once you know him. And you can’t know him in five minutes.”

Over the past two years the fighter has spent a lot of time in the company of Father Murphey, who offered to help after one of Sonny’s bouts with the law. Sonny stayed with Father Murphey out in Denver, Colorado, learning to read, write, and be a good citizen.

One of the most steadying influences in Liston’s life today is his attractive wife, Geraldine, an ex-school teacher. To her, he is always Charles, never Charley or Sonny. She “babies” him, looks after his money, and when she says go, Sonny goes.

Sonny, who doesn’t drink will sit for hours watching one of the four television sets in his six-roomed house in West Philadelphia, dreaming of the day when he will be champion of the world.