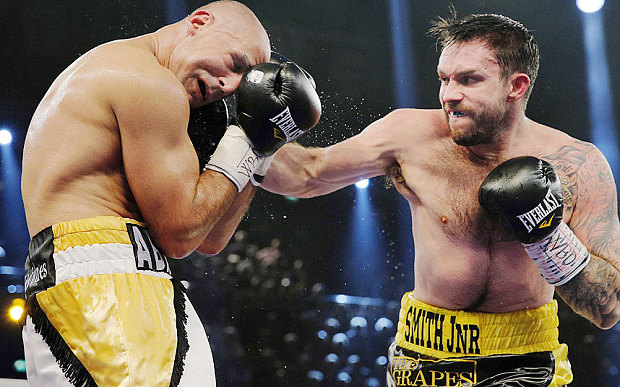 LIVERPOOL’S Paul Smith produced a disciplined display – the best of his career – that convinced many he deserved to beat WBO super-middleweight champion Arthur Abraham in Germany. The British champion’s hopes were dashed, though, by some cruel judging that handed Abraham the victory and left Smith “disgusted”.

Cries of robbery were heard when the lopsided scores of 119-109, and two of 117-111, were announced. Although Abraham, like Smith, did enough to claim he deserved victory, the official’s margins were shocking after an exceptionally close fight.

“It has shattered my world,” Smith told Sky Sports afterwards.

The 31-year-old underdog started brightly and appeared to control the opening rounds with artful industry. No longer the fearsome slugger of old, Abraham struggled to get to grips with Briton but tenaciously worked his way into the contest to edge ahead by the halfway mark.

Smith had a strong seventh, rocked Abraham in the ninth, but the champion refused to wilt. The German-based Armenian, undoubtedly aware his challenger could be on the brink of a massive win, increased his output to win the final session.

The wide scores that followed were shocking. Even if the right man won – and many felt Abraham had done enough to edge it – the tallies did not represent the fight.

“I knew I had the beating of him but I did a lot right and was outworking him in every round. I believed I had done enough and won the fight but the judges didn’t. I feel robbed.

“What can you do? How could I have won one round? It’s the one thing I hate about judges, they are robbing people of lifetime opportunities. It just shattered my world there.”

Joe Gallagher, Smith’s trainer, said: “He did himself and his family proud. How can a judge score that 119-109?”

Smith’s promoter Eddie Hearn, who plans to lobby for a rematch, added: “It has not done him justice. How can you score that one round to Paul Smith? Disgusting. He won’t get the credit for a wonderful performance.”