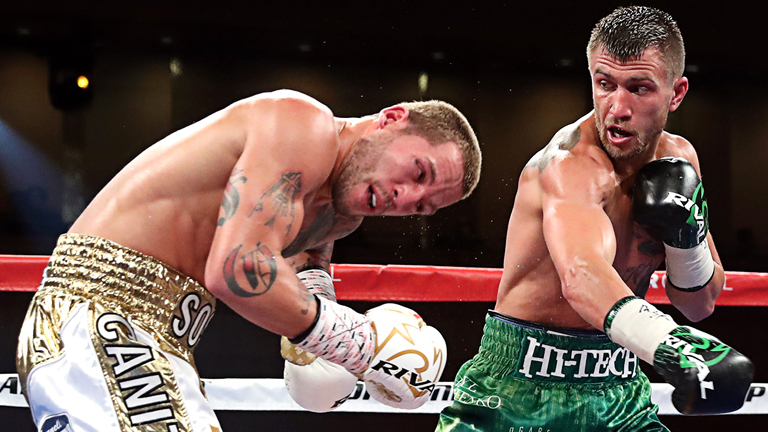 Eric Armit casts his eye over the boxing world, including Vasyl Lomachenko's mastery and support for Joseph Parker

WHAT a great weekend for Ukrainian boxing with another master class from Vasyl Lomachenko, a title defence by Olek Usyk and a crushing victory by Olek Gvozdyk. When you roll in the fighters from Russia and Kazakhstan etc. it’s no wonder the old Soviet Union was so strong at the Olympics. Is Lomachenko the best pound for pound fighter right now? If you ask four people you will probably get five different answers. It is an academic question that can never be answered with any certainty. Is Lomachenko better than Andre Ward? Pointless question since they will never fight each other. You might win an argument over facts but never over opinion. Just let’s be happy that we have so many top class fighters that putting ten names forward as the best is easy – so enjoy. Of course in my opinion the best is… No, I am not going to go there I leave that up to you.

What a contrast. Jeff Horn will get the biggest opportunity of his life when he fights Manny Pacquiao at the Suncorp Stadium in Brisbane on July 2. He gets this because of the massive support he has had financially. The Queensland Government, on behalf of the Tourist and Events Queensland organisation, the Brisbane City Council and Suncorp Stadium have all put money in the pot. Horn has 100% backing from the citizens and the whole State. Joseph Parker defends his WBO heavyweight title against Hugie Fury in Auckland on May 6. Backing? Well the promoters, Duco Events have had to go cap in hand to the Samoan Government for help as neither the Auckland City nor the New Zealand Governments want to know. Although born in Auckland Parker has Samoan parents and the Samoan Government put up $140,000 to help secure home advantage for Parker’s fight for the vacant WBO title against Andy Ruiz. They felt that the publicity added to the stature of their country and raised its profile. Now they have agreed to put up another $144,000 for the Fury fight. Shame on you Auckland. Reportedly Parker will get $2.4 million for this fight out of the approximately $4.1 million winning bid from Duco.

Anyone want to buy a ticket for Alvarez vs. Chavez. You can probably get one fairly cheap to see this fight on April 29! OK, it’s not Saul and Julio Cesar this one is between Ramon the elder brother of Saul and Omar the younger brother Julio Cesar. They faced each other before in 2014 when Ramon won a close decision but Omar says it will be different this time. So be careful if anyone tries to sell you tickets for Alvarez vs. Chavez make sure you check the date and names on the ticket first. If it seems to be too good to be true it usually is.

When I was putting some background together for the fights two weeks ago I looked at Gilberto Domingos who lost to Vinnie Carita. I noticed that when Domingos fought Billy Wright their respective weights were Domingos 207lbs (94kg) and Wright 325 1/4lbs (147.5kg). A difference of over 118lbs. I am not sure if that is the biggest weight difference for a fight but it must be pretty close. It’s like Wright carrying around bantam champion Jamie McDonnell in his shorts… Let’s not go there.